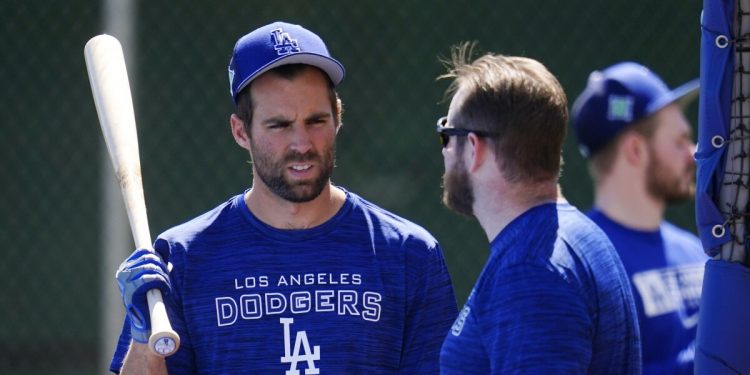 Chris Taylor’s new four-year, $60-million contract with the Dodgers had been public knowledge for a while.

An offseason surgery he had on his right elbow, however, came as a bit of unknown news at Dodgers camp Monday morning.

Speaking to reporters for the first time this spring, the Dodgers utility man discussed both winter developments, happy to have both out of the way going into the new season.

“Hopefully I’ll feel good going in this year,” Taylor said. “And my arm will be a little better.”

Taylor quietly dealt with elbow discomfort over the final two months of last season, he said, with the pain bothering him most when he would extend his arm at the end of a swing.

“It was something I could manage and like, just kind of get worked on and get it loose,” he said. “Just kind of had to manage the workload more than anything.”

Taylor, who was also battling a pinched nerve in his neck down the stretch, didn’t think the issues affected his game. But they were extra complications, coinciding with his .121 batting average and .402 on-base-plus-slugging percentage in September.

Taylor bounced back with a strong postseason in which he hit four home runs, including the walk-off blast in the winner-take-all wild card game, and posted strong numbers overall in 2021, hitting .254 with 20 home runs to earn his first career All-Star selection.

Still, when the season ended, Taylor said he had an MRI exam on his elbow that revealed “a bunch of bone chips, loose pieces” that had to be cleaned up via surgery. After undergoing what manager Dave Roberts described as a “minor operation” in mid-November, he rehabilitated throughout the league’s lockout before beginning to swing a bat again in January.

Taylor is on a throwing program to rebuild stamina in his arm and is scheduled to play the field in a spring game for the first time Thursday. So far, he has been only a designated hitter, but should be “good to go” for the start of the season, according to Roberts.

“That kind of stuff is good for you, just getting that arm care in,” Taylor said of the rehab process. “A lot of times, I think when you have an injury that forces you to do that stuff it ends up working out for the better, strengthening all those small muscles,” Taylor added. “The swing’s fine [now]. … It’s nice to wake up in the morning and not have this tightness in my bicep and forearm.”

While Taylor was working through his elbow injury in November, he was also working toward a new contract with the Dodgers as a first-time free agent.

“It was a new experience,” Taylor said. “I try to stay out of it as much as I can and let my agent handle most of it.”

Taylor said the Dodgers were always his No. 1 choice, and was thankful the sides hammered out his deal — which runs through 2025 and includes a club option for 2026 — hours before the lockout began.

“It was great,” he said. “Just peace of mind, knowing where I was going to be. I can’t imagine how hard it was for all the free agents that had to wait through all that before they could negotiate.”

Oswestry firefighters called out to Mile End crash on Monday

What happens if I remortgage two or three years into a fixed-rate deal? | First-time buyers

What happens if I remortgage two or three years into a fixed-rate deal? | First-time buyers