Dodgers Dugout: Here’s why the Dodgers will win the division 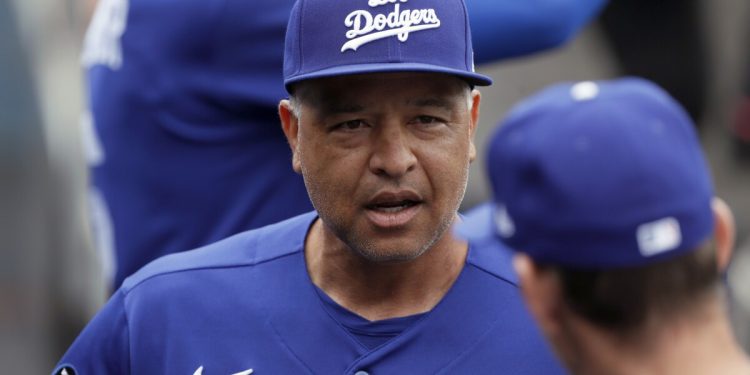 
Hi, and welcome to another edition of Dodgers Dugout. My name is Houston Mitchelland we finally made it to Opening Day.

To be a well-rounded, knowledgeable Dodgers fan, it’s important to listen to a variety of voices about the team. I enjoy yammering on about the team, but we have a new Dodgers beat writer at The Times, Jack Harris. Jack covered the Angels last season, and what better way to introduce him to you than with a Q&A about this season’s team? We will try to do these throughout the season to get a different perspective about the Dodgers.

Q: Eleven relievers on the Opening Day roster (and 16 pitchers overall) seems like a lot. Why so many?

Harris: There were two big reasons behind the decision to carry extra pitching. First, the Dodgers starters aren’t as stretched out as they would be in a normal year (a side effect of the lockout-shortened spring training). Each of them are expected to pitch at least 4-5 innings the first time through the rotation. But even that would leave extra innings for the bullpen.

The second reason can be explained in two words: Coors Field. Once the new schedule put the Dodgers season-opener at the Colorado Rockies’ high-elevation home ballpark, there wasn’t much doubt about how they would balance the roster.

Teams can never have enough pitching during trips to Denver. The Dodgers, who gave up 52 runs in 10 games at Coors Field last year, know better than most.

Q: A lot of readers are concerned with the spring training performance of Andrew Heaney. What do you say to those readers?

Harris: Concern about Heaney right now is more than fair. Not only did he struggle this spring, but he is coming off a career-worst performance in 2021, when he had a 5.83 ERA with the Angels and New York Yankees.

On the flip side, the Dodgers have a plan for the left-hander, one that includes a new breaking ball they hope will work better with a fastball-changeup combination that has long intrigued scouts. This spring, his focus was less on the results and more about finding comfort with the pitch. And by his last outing, Heaney said he was beginning to feel more confident with the new weapon.

Q: Starting pitching depth is a concern. If someone in the rotation struggles, or, if there is an injury or two, who do you see as the next men up in the rotation?

Harris: Tyler Anderson would be the likeliest choice early in the season. The left-hander has more than 100 starts in his MLB career, and though he will open the season in the bullpen, the Dodgers plan to keep him stretched out to around four innings. David Price is another veteran alternative, but is still building up stamina.

As the year goes on, other options could come into play. Prospects such as Ryan Pepiot, Bobby Miller, Andre Jackson and Landon Knack weren’t ready to be in the majors to begin the year, but could quickly pitch their way onto the roster with impressive performances in the minors.

Dustin May is also expected to return from Tommy John surgery sometime after the All-Star break.

The Dodgers can always explore the trade market, too, where names such as louis castle of the Cincinnati Reds and Frankie Montas of the Oakland Athletics haven’t yet been moved despite a lot of speculation this spring.

Harris: This is a scenario the Dodgers are hoping to avoid, but could very well have to confront.

Roberts has said Bellinger’s role as the starting center fielder isn’t in danger right now, despite his struggles this spring and career-worst performance in 2021. Still, if this season looks anything like last year, it’s difficult to imagine the Dodgers continuing to play him everyday.

If he reaches the start of June with those numbers, he could be platooned or dropped to the bench entirely. Either way, for the Dodgers to be anywhere near their best, they probably need Bellinger to at least somewhat bounce back.

Q: With the spring he had, the Dodgers could park Edwin Ríos in the DH spot for a while and see how he does. How do you see the Dodgers using the DH position this year? A more-or-less full-time guy, or shuffling people in and out?

Harris: The Dodgers have said they will shuffle people in and out, which makes sense given their lineup versatility and desire to keep their regulars fresh.

Still, Ríos’ likeliest route to playing time is either at DH or third base (where he could spell Justin Turner on days Turner needs a break defensively.) His biggest competition for at-bats, meanwhile, seems to be with fellow left-handed hitter Gavin Lux. If one of them catches fire, they could become a de facto everyday player and relegate the other to a bench role.

Either way, if Ríos keeps hitting homers the way he did this spring (or the way he has while healthy in his first couple MLB seasons) he should get plenty of opportunities at the plate.

Q: You covered the Angels last year. How does it feel to be covering a team that makes the playoffs?

Harris: Ha! I definitely won’t miss the slog that was the final two months of the Angels season last year.

What has been interesting this spring is the way the Dodgers talk about the playoffs — not quite as a given, but as something they need to position themselves for in order to make a World Series run come October.

Having to settle for a wild-card berth last year obviously cost them, and Roberts has made it clear winning the division is this regular season’s No. 1 goal; as opposed to the Angels, who even after bolstering their pitching this winter are still simply hoping to crack the expanded playoff field.

Given the way last year played out, it’s easy to understand why the Dodgers are approaching the season that way. But it’s still a luxury few other teams in baseball can enjoy — knowing on opening day that, barring a colossal collapse, a playoff berth is almost a guarantee.

Thanks to Jack for taking time out of his busy schedule to answer these questions. You can read his stories all season at latimes.com/sports/dodgers.

The Dodgers announced their roster on Thursday. Here it is. Remember, it’s a 28-man roster through May 1, then it is cut down to 26.

González is dealing with elbow inflammation and is the only real surprise here. Cleavinger took his spot.

The easy prediction first: The Dodgers will make the playoffs, especially now that more teams make the playoffs. But will they win the division? On paper, to me, last year’s team was better because they had a deeper starting rotation. They have basically exchanged Bauer/Max Scherzer for Heaney, and that’s a step down even if Heaney pitches well. Instead of Corey Seagerthey have Freeman, which makes them a bit better offensively and, with Trea Turner moving over to short, his natural position, makes them better defensively there. They lose the bat of AJ Pollock and become weaker defensively in left field. They basically traded Kenley Jansen for Kimbrel, which at best will be a wash. I’d still rather have Pollock with Treinen as closer than no Pollock and Kimbrel as closer. Their offense should be better just because they have a DH now, but that’s true for every NL team. Plus, if Bellinger hits like he did last season and in spring training, the Dodgers still effectively have a pitcher hitting in the lineup.

The Dodgers need Buehler, Urías and Kershaw to stay healthy. They need Gonsolin to pitch more than 4-5 innings a start.

But then you look at other teams in the division, and you see they all have question marks. The Giants lost Buster Posey and Kris Bryant. Their ace the last two seasons, Kevin Gausmanis gone. But they will remain the top threat to the Dodgers. The Padres imploded last season and will have to prove themselves again and they start the season without Fernando Tatis Jr. The Diamondbacks and Rockies are the Diamondbacks and Rockies.

Three questions for you to answer if you click here.

How many games will the Dodgers win this season?

Will they win the division?

Will they win the World Series?

Again, to vote in this survey, please click here.

‘A team that has to prove something’: Five opening-day questions for the Dodgers

Braves star Ronald Acuña Jr. on what he’ll miss about Freddie Freeman: ‘Nothing’

The Dodgers hit eight homers on Opening Day in 2019. Watch and listen here.

Why Mobile App Development Is Important For Start-ups