Dodgers Dugout: Here’s why the Dodgers won’t get Juan Soto 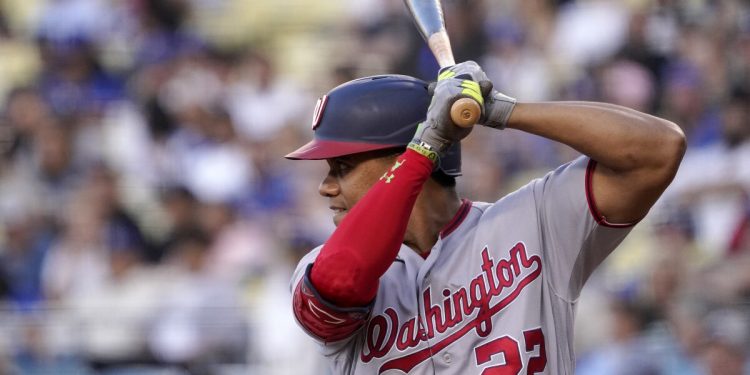 
Hi, and welcome to another edition of Dodgers Dugout. My name is Houston Mitchelland what will the Dodgers do at the trade deadline?

The trade deadline is Tuesday, and unless you’ve been off the planet the last week, most of the speculation centers on where John Soto of the Nationals will end up. Oddsmakers on Tuesday made the San Diego Padres the favorites to get him, followed by the Dodgers, Cardinals and Mets. Soto reportedly turned down a 15-year, $440-million extension offer by Washington, which later announced it would listen to trade offers for him. Of course, Soto remains under team control for a couple more seasons, so the Nationals don’t have to trade him this year, but the general consensus is they will.

Before we talk about the Dodgers acquiring Soto, let’s look at what makes him such a big deal.

Since the start of the 2018 season, here are the players with the best OPS+ (minimum 1,500 plate appearances):

As usual, Mike Trout is on a different level than everyone else, but Soto is second. And if the Dodgers get him, they would have three of the top six offensive players over the last five seasons.

Any team would love to have Soto. But is he worth the price? The Nationals, according to reports, are asking for four or five top young prospects. That means the Dodgers would have to give up at least a couple of the following: Diego Cartaya, Dustin May, Bobby Miller, Andy Pages, Michael Vargas, Michael Busch or Ryan Pepiot. Really, they would probably have to give up three of their top 10 prospects and a couple of others.

Nationals GM Mike Rizzo said on a Washington radio station Tuesday that, despite rampant speculation, the Nationals won’t demand a team take on the contract of struggling pitcher Patrick Corbin in a deal for Soto.

“We’ve never contacted teams and talked about Juan Soto and attaching any contract to any player,” Rizzo said. “We’re not going to dilute a return for any player by adding a bad contract. That’s not where we’re at in our organization at this time. We want to get the most for each and every trade that we do, so we certainly are not going to tack on anybody’s contract to anybody’s deal, including Juan Soto’s or Josh Bell’s or anybody.”

The question is, does Soto fill a need for the Dodgers, or is he so good, it doesn’t matter if he fills a need or not, you just get him anyway? The Dodgers already have a great offense, though this would make it even better. It likely would mean fewer at bats for Bellinger and Max Muncy. It would mean fewer at-bats for Trayce Thompson and Jake Lambwho have been unlikely contributors.

The guess is the Dodgers do not get Soto. The asking price will just be too high. However, the one thing we have learned in the Andrew Friedman era is that you never can safely predict what he will do.

Here’s the question for you though. Should the Dodgers acquire Soto, even if it means trading away three to five top prospects? Click here to vote.

Who else is available?

So, if the Dodgers don’t get Soto, who is out there? Here are some of the top names (some of whom could have been traded by the time you read this):

Willson ContrerasC, Cubs: The Dodgers really don’t need a catcher, but with the NL now having a DH, nothing is impossible.

Frankie MontasRHP, Athletics: Once upon a time he was a Dodgers prospect who was traded to Oakland for Rich Hill. Now he’s a solid starter who received Cy Young votes last season and strikes out more than a batter an inning.

louis castleRHP, Reds: Probably the best starting pitcher available, Castillo has a 2.86 ERA and has given up only 63 hits in 85 innings, with 90 strikeouts.

Andrew ChafinLHP, Tigers: The best left-handed reliever on the market, he is as good against right-handers as left-handers. Since last year, he has given up only 69 hits in 100.1 innings, striking out 103.

David RobertsonRHP, Cubs: He has bounced back from all his injuries and has a 1.83 ERA with 14 saves, striking out 50 in 39 innings. The drawback is his 19 walks. He also has postseason experience, with a 3.11 ERA in 39 games.

Max Muncy went one for five in the Dodgers’ opening-day victory over the Colorado Rockies on April 8. That left him with a .200 batting average and that’s the highest it’s been. At the end of April he was hitting .136.

On July 5, he went two for two with a double and a homer and lifted his average to .171, his high point since opening day.

Loyalty is a great thing. But it’s time for Muncy to sit. He looks completely lost at the plate. You feel for him as you watch him swing at bad pitches and let good pitches go right down the middle. Give him a mental break. It’s time.

So why did he play? He was considered the best defensive catcher of his era. According to this great SABR bio of him, “And while only seven catchers in the Hall of Fame (through the 2021 season) ever amassed as many as 100 assists in a single season, Bergen accomplished that feat in nine of his 11 major-league campaigns, failing only in 1903 and 1907, the two seasons he caught fewer than 60 games.” You couldn’t run on the guy.

If we limit the list to only L.A. Dodgers:

Two things stand out here: This year’s team has two players on the list. So do the 1988 Dodgers (of course, by the time the postseason came around, Davis wasn’t playing much). Maybe that’s a good omen. Griffin was the shortstop in 1988 and was backed up by Dave Andersonwho hit .249.

The Dodgers are 4-8 against the Pirates and Nationals, two of the worst teams in the NL. They are 61-24 against everyone else.

How much would a team give up for Juan Soto? Probably more than you think

Members of the 1969 Mets react to Gil Hodges being inducted into the Baseball Hall of Fame. Watch and listen here.

How the Claremont Institute, home to Trump lawyer John Eastman, rose and fell