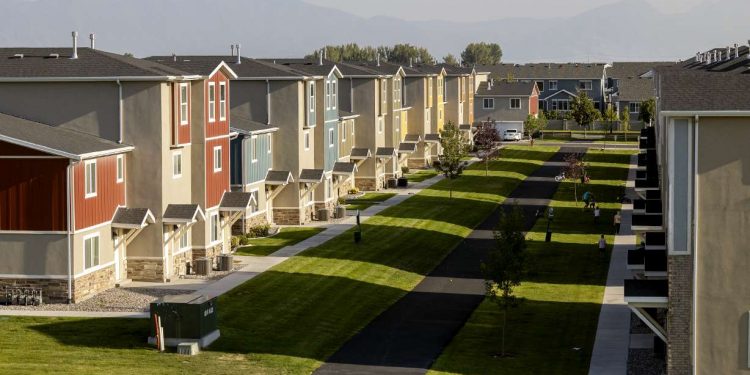 New housing in Vineyard is pictured on Aug. 11, 2021. The U.S. Census Bureau said Thursday that Utah was the sixth overcounted state in the 2020 census. (Scott G Winterton, Deseret News)

SALT LAKE CITY — Utah’s 18.4% increase in population between the 2010 and 2020 censuses topped the nation; however, U.S. Census Bureau officials said Thursday that they overcounted the Beehive State and seven other states during their collection period.

But it’s unclear what that means yet for Utah’s official 2020 population total. Deb Stempowski, assistant director for decennial programs at the U.S. Census Bureau, said her team will look at the post-census results to see if any adjustments to population counts are warranted. The population totals for every state help determine federal spending and resource allotments.

Local experts believe there’s nothing to worry about, though. Mallory Bateman, director of demographic research at the University of Utah Kem C. Gardner Policy Institute, said she believes it shouldn’t impact Utah’s count and funding apportionment by too much if at all.

“I think it’s kind of a reminder of what a wild atmosphere was occurring,” she said. “You never want to be off, but it’s better there wasn’t any change of apportionment or anything that occurred in Utah that would have been maybe questioned with this information.”

The Census Bureau highlighted the results within the release of its post-enumeration survey, which analyzed the accuracy of the collection. It found that the census also overcounted Delaware, Hawaii, Massachusetts, Minnesota, New York, Ohio and Rhode Island, as well, while it undercounted Arkansas, Florida, Illinois, Mississippi, Tennessee and Texas.

In Utah’s case, the net coverage error estimate was plus 2.59%, well above the national average of minus 0.24%. The higher the percentage, the more people were counted than what should have been the case. Utah was sixth-highest in overcounting with Hawaii’s plus 6.79% landing with the highest rate.

Experts don’t exactly know why this happened but overcounting tends to occur when people live in two areas and incidentally fill out forms at both addresses, Kennell explained.

Bateman said she guessed Utah was overcounted because there were “a lot of factors” happening by April 1, 2020, which is what the census tries to collect a snapshot of.

This was in the middle of COVID-19 lockdowns and restrictions, so “snowbirds” may have lingered around a little longer than usual. It could have been the result of off-campus college students, too, since dorms were all but empty by this time. There was also an overcount in non-Hispanic white populations overall in the nation, and three-fourths of Utah falls into this category.

Another theory might be Utahns’ willingness to fill out the survey. Utah and Minnesota, for example, were near the top in census response rates and were both leaders in overcounting.

“Maybe people were a little overeager in getting those responses in,” Bateman said, with a chuckle.

The bureau didn’t have information regarding whether certain areas of the state were overcounted more than others.

Whatever the case may be, she says it’s not a sign Utah wasn’t growing as fast as between 2010 and 2020. All the other information released by the Census Bureau, including its 2021 population estimates, indicates that it wasn’t off by too much. Similar data points help the federal government apportion resources.

The survey released Thursday mostly helps the bureau tidy up its 2030 census process.

“It is important to remember that the quality of the 2020 census total population count is robust and consistent with that of recent censuses,” said Census Bureau director Robert Santos. “However, we know there is still more work to do in planning future censuses to ensure equitable coverage across the United States and we are working to overcome any and all obstacles to achieve that goal.”

All the future projections also have Utah on pace to grow by 66% over the next 40 years, also. As it does, it will continue to get a larger share of federal funding, resources and representation, given that it continues to grow faster than other states.

“If the trends that have been occurring continue, we will likely continue to be a state that sees growth,” Bateman said. “When compared with the rest of the nation, we have a lot of areas that aren’t growing or having decline. The fact that we are continuing to grow makes us a pretty unique place overall.”

Carter Williams is an award-winning reporter who covers general news, outdoors, history and sports for KSL.com. He previously worked for the Deseret News. He is a Utah transplant by the way of Rochester, New York.