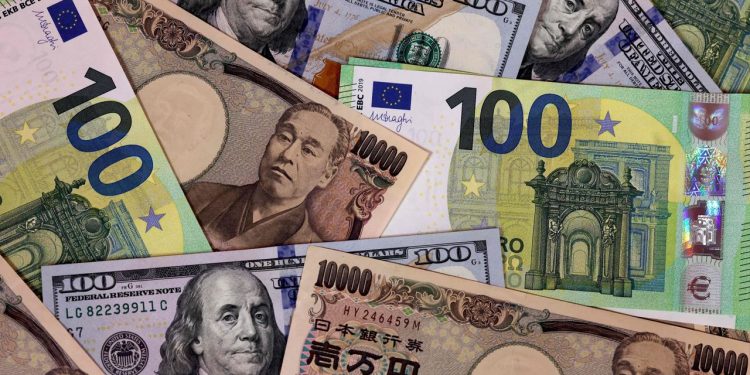 The dollar soared against major rivals on Thursday, hitting a two-decade high against the yen, as the Bank of Japan vowed to continue a dovish stance and pledged unlimited bond buying.

Sparking the dollar’s run higher earlier in the session, the Bank of Japan vowed to defend a 0.25% yield on its 10-year fixed-rate Japanese government bond
TMBMKJP-10Y,
0.219%
by buying those bonds every business day, as long as needed.

The move just added to the list of everything going the dollar’s way right now, say analysts. That list includes lockdowns in China and worries over global growth, Russia’s war in Ukraine, and the likelihood of aggressive central bank hikes, chiefly from the Federal Reserve, said Matthew Ryan, senior market analyst at Ebury.

“These risks to growth, combined with the sharp move higher in inflation globally, has triggered one of the most violent selloffs in risk that we’ve seen in some time, certainly since the start of the COVID-19 pandemic in March 2020,” he said, in a note.

The dollar’s march didn’t let up after data showing the U.S. economy shrank 1.4% in the first quarter, the first drop since the onset of the pandemic. That’s even as weak growth could trim expectations for a rate hike bigger than 50 basis points at next week’s Federal Reserve meeting.

King dollar, we have a problem

While a strong dollar can be a bonus for vacationing Americans, there are plenty of reasons why investors might not want to welcome that momentum.

“Also, a strong dollar may imply that the Fed is draining the market from cash (tightening monetary policy), thus reducing the supply of USDs and thus boosting its value while at the same time there are fewer dollars to invest and move around,” he added.

Finally, U.S. stock markets can sometimes experience an inverse relationship to the dollar, “as it may also signal a flight to safety for investors in the U.S. stock-markets (i.e., a liquidation of investments in stocks and toward U.S. bonds),” said Iosif.

While 2022 is not even at the halfway mark, the S&P 500
SPX,
+2.15%
is down nearly 12%, putting it on track for the worst annual performance since the Great Financial Crisis if those losses worsen or are even maintained.

Taking a look at how the S&P 500 has performed relative to the rest of the world when the dollar gains, Jefferies analysts said U.S. stocks would likely keep outperforming their peers. “Interestingly, despite breaking out several other occasions, the DXY has been stuck in a fairly tight range for [around] 7 years and hasn’t reached 104 since it soared during the tech bubble,” they said.

Across the Atlantic, the euro and the pound have been struggling as the biggest ground war since World War II rages in Ukraine, which is also encouraging flows to the dollar. The common currency came under fresh pressure from news this week that Russia cut gas supplies to Poland and Bulgaria, with fears bigger, more dependent countries such as Germany could face suppy issues.

While the Federal Reserve is widely expected to raise interest rates at its early May meeting, and keep hiking, many see the European Central Bank unable to do the same. Economists expect fallout from Russia’s war in Ukraine to prove a harder hit on Europe’s economy, which is struggling to break its reliance on Russian energy supplies, than that of the U.S.

Germany’s annual rate of inflation climbed 7.4% in April, the highest reading since fall 1981. That’s a day after the economy minister said it was revising its 2022 growth forecast to 2.2% from 3.6%, which piled further pressure on the euro, said Ebury’s Ryan.