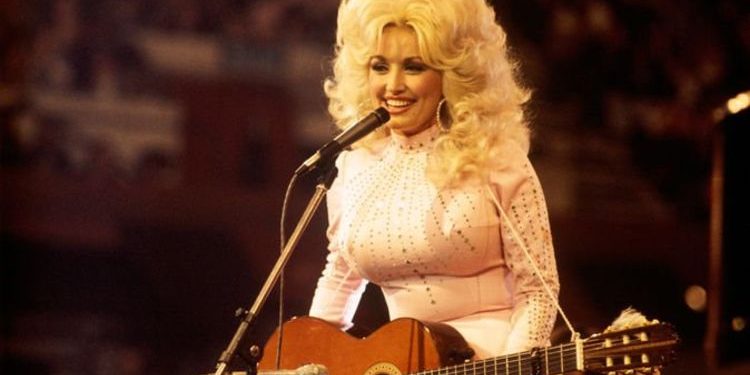 
The legendary country singer Dolly Parton has been under the watchful eye of the public for almost her entire life. She first joined the music industry aged just 13 when she recorded her debut single Puppy Love. Since that fateful song, she has gone on to sell more than 100 million records worldwide over her 60+ years in the industry. And while many of her fans might think they know everything about her, she has revealed there are parts of her that she will not show off.

Dolly is renowned for wearing extremely over-the-top frocks and jumpsuits. Many of her live performances and music videos show her sporting fashionable, rhinestoned outfits that only she could ever get away with. Although these costumes are certainly part of Dolly’s signature look, they also cover up a number of tattoos that she has hidden across her body.

One photo of the 76-year-old star from 2012 shows the hint of one tattoo, which looks like a bouquet of pink flowers on her chest poking between her breasts.

Dolly revealed that her body is covered in art including butterflies, bows, flowers, ribbons and a beehive. Opening up about the icons’ meanings, she said: “Butterflies don’t sting, they don’t bite, and they are so beautiful, and I just kind of related to them with my own personality. I claimed them as my little symbol.”

Even more surprising is the touching reason why Dolly decided to get tattoos on her body.

In Dolly’s autobiography, Songteller: My Life in Lyrics, she revealed she often wore wigs during public appearances. Dolly wrote: “I always wore my hair all teased up. Whenever that style started, I was the first to get my hair all poofy. Then as soon as I could buy those hairpieces and wigs, I wanted them. For one thing they were so handy. Plus my hair would never do exactly what I wanted it to. So the wigs became kind of my trademark.”

Dolly may remind her fans more of a contemporary rock star with her string of tattoos, over-the-top wigs and jumpsuits, but nobody can say they have hindered her career at any point. The singer has achieved more than 25 number one singles throughout her career. And, in tandem with this, she has become worth more than $500 million. Nashville Business named her the wealthiest country music star of all time.