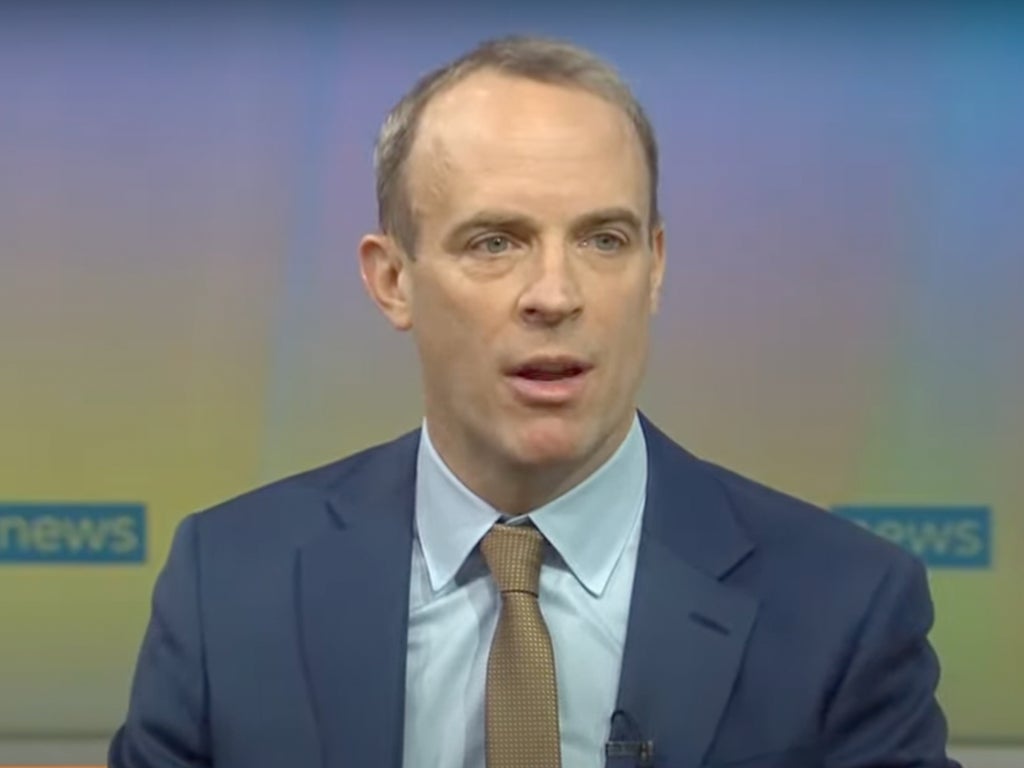 Deputy prime minister Dominic Raab sparked confusion over the number of Britons suffering serious with illness from the omicron variant after he wrongly stated that the hospitalisations had shot up to 250.

The cabinet minister initially told Sky News on Tuesday morning that the number of people now in hospital with the new Covid variant was 250. “Last I saw it was in the low hundreds – 250 the last time I looked.”

However, Mr Raab then revised his figure down from 250 to nine when he appeared on BBC Breakfast. “I know we’ve had one death – I think we’ve got nine people who are in hospital with [omicron].”

Mr Raab “misunderstood” or “misheard” host Kay Burley’s question about hospitalisations and gave an incorrect figure during his appearance, according to Sky News.

A Whitehall official told The Independent that the latest figure remains 10 hospital cases with omicron, pending a further update from the UK Health Security Agency (UKHSA).

The figures shared by the UKHSA on Monday showed 10 people in hospital with omicron, and health secretary Sajid Javid also said on Monday there were 10 hospitalisations with the variant.

Mr Raab went on to confirm that there were omicron hospitalisations were “10 at the moment” when he was quizzed over his earlier mistake during a later appearance on ITV’s Good Morning Britain.

He added: “First of all, I misheard one of the questions around whether it was hospitalisations of omicron-related patients or more generally, but the figures are: 1 death from omicron, 10 in hospital, and I can tell you the latest daily hospitalisations, for all Covid strains, run at 900.”

Meanwhile, Mr Raab did not rule out further Covid restrictions being considered for Christmas or New Year to deal with the rapid rise in omicron cases.

“These issues are always discussed,” he told Times Radio. “But we have got plan B – that’s what we think is required over the Christmas period.”

The justice secretary also acknowledged “teething problems” after people were seen queuing for hours to get booster jabs and the booking website struggled to cope with the demand for appointments.

Mr Raab insisted the issue with ordering lateral flow tests from the government website is not due to a lack of the tests.

He told BBC Breakfast: “The problem isn’t supply and volume, the problem is the allocation and distribution, or the delivery, of it. We know that in relation to the online system there were some challenges yesterday and that’s partly because of the proportion they’ve got each day.”

Mr Raab also urged Conservative rebels to back the government’s plan B restrictions in the Commons on Tuesday, arguing that Covid certification is not a “big step or a slippery slope”.

At least 70 Tories are expected to rebel and vote against the government later today, with backbencher Marcus Fysh comparing the health pass for nightclubs and large events to Nazi Germany.

But the deputy PM claimed that Tory backbenchers’ concerns over the mandatory introduction of passes are “overstated” and said Mr Fysh’s remarks were not a “reasonable critique”.