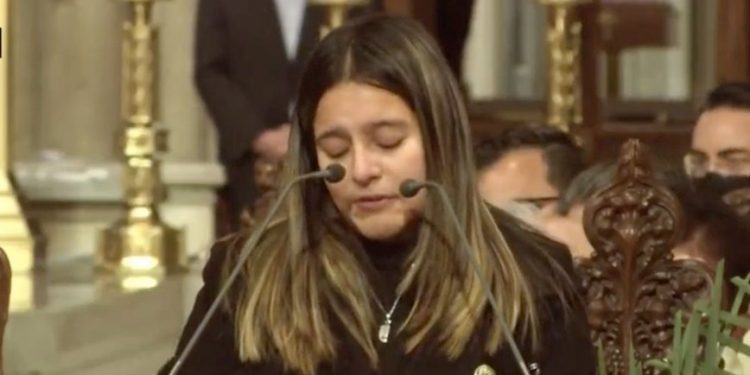 Watch the heart-wrenching speech as HITC explain the tragic event that resulted in the Detective’s death.

Just 14 months after joining the New York Police Department, Detective Jason Rivera was killed in the line of duty.

The 22-year-old was shot and killed while responding to a domestic incident in Harlem on Friday 21st January 2022.

Dominique Luzuriaga, the widow of the NYPD officer, delivered a heart-wrenching eulogy during her late husband’s funeral in St. Patrick’s Cathedral.

Luzuriaga acknowledged concerns over public safety as she singled out the Manhattan district attorney, Alvin Bragg, in her tearful speech:

“We are not safe anymore, not even the members of the service. I know you were tired of these laws, especially from the new D.A. I hope he’s watching you speak through me right now.”

The Police Benevolent Association of the City of New York stated that with their heads bowed and hearts heavy, the officers continue to carry Jason Rivera, referring to him as their brother and hero in a recent Twitter post.

A sea of blue saluted the fallen officer as the funeral car made its way down Fifth Avenue during the service.

Kody Brown: Christine Will NEVER Get an Official Divorce Because She Betrayed Me!

Kody Brown: Christine Will NEVER Get an Official Divorce Because She Betrayed Me!