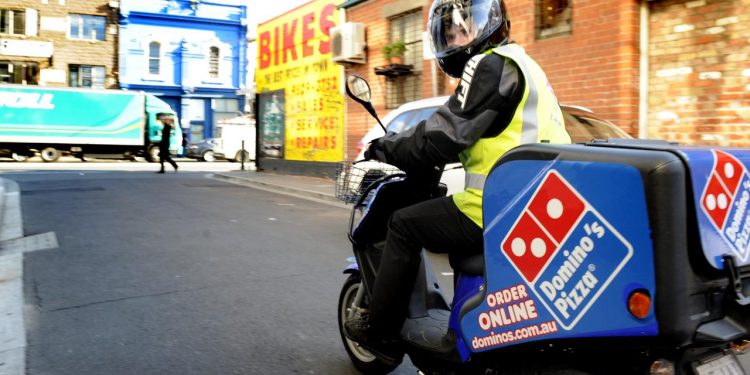 Domino’s has disappointed investors with its latest financial results but says it’s keeping customers happy with shorter waits for deliveries.

Domino’s Pizza is rolling out new meal offerings, continuing to aggressively expand its store network and reduce delivery times, but has disappointed investors and analysts with its latest financial results.

The fast-food giant on Wednesday reported first-half sales growth of more than 11 per cent, but underlying net profit slipped 5.3 per cent.

Barrenjoey analysts said the results missed expectations across all divisions and the current half started “a touch weaker” than anticipated.

Domino’s shares tumbled 14 per cent to $86.13, continuing a slide from about $165 in September and far lower than Barrenjoey’s price target of $130.

The ongoing project has involved ousting underperforming franchisees and replacing them with higher-performing existing store managers and franchisees or trialling new franchisees for store ownership.

Mr Meij said the lower earnings were also due to a “rebasing” of sales in Japan in the December quarter following record growth that meant Japan same store sales (SSS) remained 40 per cent higher compared with pre-Covid.

“Covid-19 has brought unanticipated challenges, including the closure of a market (New Zealand in August), temporary store closures, and staff shortages as they self-isolate as patients or close contacts,” he said.

What set the share price tumbling was Domino’s forecasting full-year SSS growth “slightly below the 3-5 year outlook” of 3-6 per cent.

But the company believes Covid has simply brought forward the “Age of Delivery” and reckons it’s well positioned to capitalise on that.

“Domino’s will continue to win and keep customers by delivering value, product, service and image at an affordable price,” Mr Meij said.

“This means we will respond to tackle short-term inflationary pressures with a customer-first approach, serving ‘more for more’ – such as upsized meal offerings that are a win for customers and franchisees.”

An example of that is the new “Value Max” range in Australia/New Zealand that gives customers extra toppings but somehow also delivers higher margins to franchisees.

As part of its expansion push, Domino’s expects to launch its new app in the June quarter that it believes will convert new customers.

Mr Meij said the store expansion target in Australia/New Zealand of 1200 within the 2025 to 2028 window – part of its drive to have 6650 stores globally by 2033 – was “not only achievable but necessary to reach our customers”.

The idea is that more new stores means customers get one closer to them, resulting in speedier delivery times and better unit economics for franchisees.

“Our teams have actually lowered delivery times and lifted customer satisfaction scores, showing the importance of our delivery-first approach and having more stores closer to customers,” Mr Meij said.

Johnson walks out after being challenged on Abramovich claim