Don Young, Alaska Congressman and Dean of the House, Dies at 88 – The New York Times 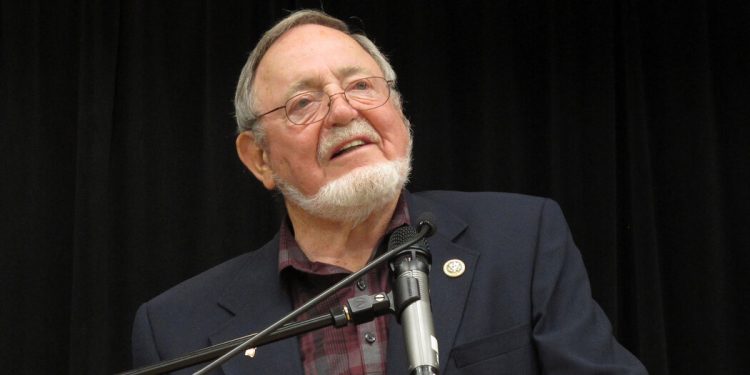 At 26, Mr. Young moved to Alaska soon after it attained statehood in 1959. He admitted being drawn by Jack London’s 1903 novel “The Call of the Wild,” about a powerful, 140-pound dog named Buck, a St. Bernard-Scotch collie who is stolen from a ranch in the Santa Clara Valley and sold as a sled dog in the Yukon.

Mr. Young settled in Fort Yukon, a town of 700 just above the Arctic Circle. He tried fishing, trapping and panning for gold, as if resurrecting London’s Klondike wilderness life of 1897. In town, he taught elementary school classes and coached high school basketball and track teams for several years at a Bureau of Indian Affairs school, where wood-burning stoves warmed the students through freezing winter days. With the breakup of the Yukon River ice in spring, he piloted his own tug and barge, carrying supplies to villages along the river.

In 1963, Mr. Young married a Native Alaskan bookkeeper, Lula Fredson, an Indigenous Gwich’in, who became his political adviser and office manager. They had two daughters. Mrs. Young died in 2009. In 2015, Mr. Young married Anne Garland Walton, a Fairbanks flight nurse, who had two children and six grandchildren by a previous marriage.

In addition to his wife, he is survived by his daughters, Joni Nelson and Dawn Vallely; his wife’s children; 14 grandchildren; and six step-grandchildren.

In 1964, Mr. Young was elected mayor of Fort Yukon, serving three years in his first public office. As he became more widely known, he won a seat in the Alaska House of Representatives in Juneau and served two terms, from 1966 to 1970. He then won a seat in Alaska’s Senate. In 1972, halfway through his four-year term, he ran for Alaska’s at-large seat in Congress.

The incumbent was Nick Begich, a freshman Democrat seeking re-election. Three weeks before the election, Mr. Begich and the House majority leader, Representative Hale Boggs, a Louisiana Democrat on a fund-raising trip to Alaska, boarded a small plane for a flight from Anchorage to Juneau. The plane vanished, and its passengers were never seen again, despite wide searches of the state’s rugged southern coast and the Gulf of Alaska.

The missing Mr. Begich outpolled Mr. Young on Election Day but was declared legally dead a month later. Mr. Young then won a special election to fill the vacancy and took Alaska’s congressional seat in March 1973, starting his long political life in Washington.