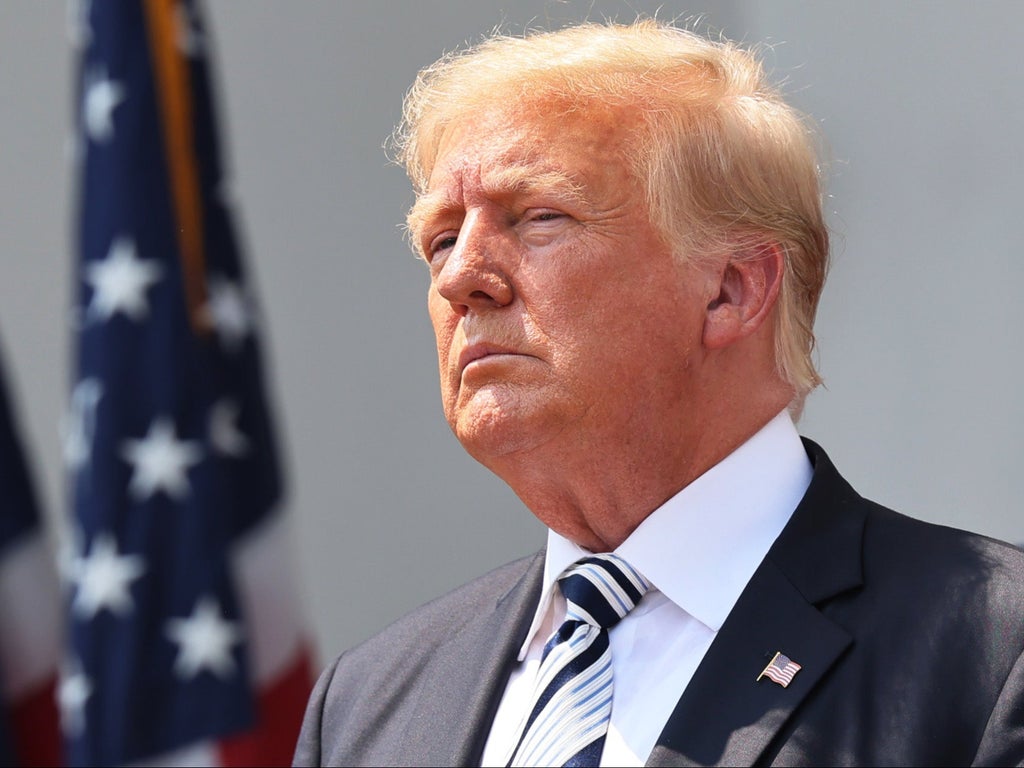 Former President Donald Trump, who has called for political opponents to be fined, fired or even jailed on numerous occasions, is now painting himself as an anti-censorship champion with his new lawsuits against two social media titans.

On Thursday, the former president announced action against Facebook and Twitter CEOs Mark Zuckerberg and Jack Dorsey, in the form of class-action suits demanding the reinstatement of accounts for plaintiffs and an end to content warnings placed on videos and images by Facebook moderators.

The suits also urge the court to declare Section 230 of the Communications Decency Act unconstitutional, ending the protections ISPs and social media giants enjoy by not being classified the publishers of the content on their platforms.

At a press conference on Wednesday that at times devolved into rambling diatribes about his handling of the Covid-19 pandemic and other topics, Mr Trump accused social media giants of engaging in “censorship” and echoed baseless claims that Democrats in Congress were forcing tech companies to discriminate against conservatives and their content.

“These companies have been coopted, coerced, and weaponised by government and by government actors to become the enforcers of illegal, unconstitutional censorship,” Mr Trump said at his news conference.

“That’s what it is, censorship,” he continued.

Conservatives of many stripes have long argued that Facebook and Twitter “shadow ban” their content or make it harder for other users to see, a charge fiercely denied by both companies. Mr Trump himself was actually banned from the platforms in January following his supporters’ deadly assault on the US Capitol; he has argued that the platforms’ claims that he incited violence are efforts to silence him over his political views, namely his refusal to accept the 2020 election results.

With his announcement Wednesday and accusatory news conference, Mr Trump cast himself and conservatives as the opponent of liberal boogeymen in Congress who supposedly have control over the US tech sector.

But the former president himself is no stranger to efforts to silence political enemies for their views; on numerous occasions, both before and during his presidency, Mr Trump showed the same instinct in the face of a wide range of opponents.

The conservative news network Fox News, which usually takes a pro-Trump stance in its commentary and reporting choices, has nevertheless been a frequent target of Mr Trump’s attacks ranging back to his 2016 campaign for office. At the time, he called for the firing of host Megyn Kelly, who famously clashed with him on numerous occasions, as well as commentator Karl Rove, who he said Fox News should not have on air.

Liberals too have often been the president’s targets for ire. His son Donald Jr, an active member of his campaigns, led a Twitter campaign calling for Kathy Griffin’s firing from CNN after she posted a picture depicting Mr Trump’s severed head, and he himself called for HBO host Bill Maher’s firing in 2013.

The news media, which covered Mr Trump extensively throughout his campaigns and White House tenure, has also been a top victim for his censorious inclinations. In 2015, he called for the firing of two reporters over their reporting about protesters at one of his rallies; Mr Trump has also called for boycotts of CNN, the firing of The Wall Street Journal’s editorial board members, and for his fans to cancel subscriptions to various local newspapers.

It’s unclear whether the former president’s legal efforts will gain any traction whatsoever, as Facebook and Twitter are private companies and the president’s lawsuits appear to hinge on a court deciding that the social media giants do not have the same freedoms as other companies to moderate speech on privately-owned apps and websites.

In 2018, a court in California ruled against a far-right activist, Charles C Johnson, who sought to have his own social media bans reversed, finding that the companies had the right to moderate speech on their platforms.

“Defendant’s choice to close Plaintiff’s account on the ground that Plaintiff’s tweet was threatening and harassing is an editorial decision regarding how to present content, ie, an act in furtherance of Defendant’s free speech right,” the court found, adding: “ Defendant’s choice not to allow certain speech is a right protected by the First Amendment.”