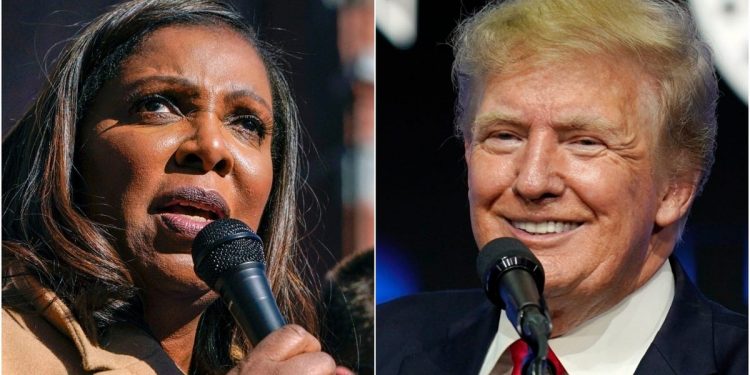 The decision is the second victory Monday for James’ probe of the former president’s business dealings; in a press statement, James promised, “our investigation will continue undeterred.”

Earlier Monday, the same judge, New York State Supreme Court Justice Arthur Engoron, held Trump personally in contempt of court and ordered that he, too, comply with James’ subpoenas, which in his case seek his personal business documents.

It is unclear when Trump would begin paying the fine. His lawyer, Alina Habba, said after court that she would move quickly to draft and sign an affidavit that will address the court’s concerns by describing specifically where the Trump Organization searched for his documents before coming up empty.

As for Cushman & Wakefield, the firm, which severed ties with Trump’s business last year with some fanfare, must by May 27 turn over all documents relating to its prior real estate work with Trump.

The firm must also turn over details on thousands of comparable non-Trump assessments, and business communications relating to their decision to sever ties with Trump’s business.

“Cushman severed ties a year or so ago, correct?” the judge asked a lawyer for the AG, Kevin C. Wallace, during Monday afternoon’s hearing.

“And you want to see internal documents on why they did that?” the judge asked.

“I think it’s fair to say they made a noisy exit,” Wallace said.

The AG’s office believes Cushman has a decade-long history of issuing questionable statements about the value of Trump’s properties, Wallace said.

The AG’s office has said that those questionable assessments were used by Trump to get hundreds of millions of dollars in loans and tax breaks.

Cushman valued Trump’s stake in the skyscraper at $220 million in 2012. Three years later, they assessed his stake at $550 million, more than double what they’d said just three years prior.

Trump’s lawyers left without commenting on the decision.

“For the second time today, a judge has made clear that no one is above the law,” James said in her press statement.

“Cushman & Wakefield’s work for Donald J. Trump and the Trump Organization is clearly relevant to our investigation, and we are pleased that has now been confirmed by the court.”