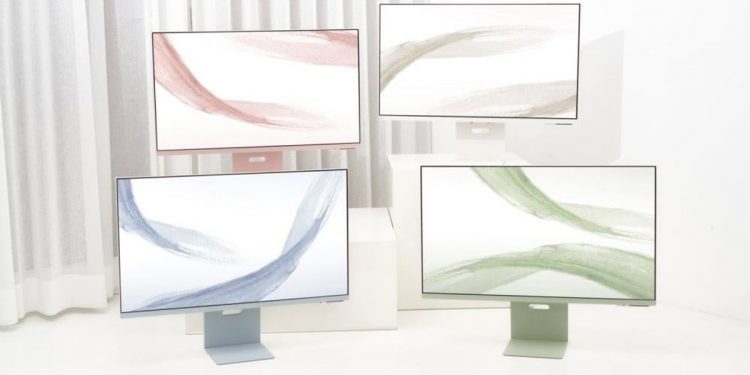 There are plenty of external monitors on the market, but many Mac users (myself included) naturally gravitate toward the aesthetics and features of those made by Apple: a high-quality display, excellent speakers, ease of use, and, of course, an aesthetic that aligns with the rest of your Apple products. So yes, Apple’s Studio Display might seem like the obvious choice — but take a look at a new offering from Samsung and you might feel differently.

Apple’s Studio Display is great on paper. The 27-inch 5K monitor shares a resemblance to the company’s wildly expensive Pro Display XDR monitor (both look a bit like a silver iMac without the chin), and it reaches 600 nits of brightness. On the other hand, it doesn’t support HDR or local dimming zones, which is a shame for a display in this price range (more on that later).

The Studio Display sports a 12MP Ultra Wide camera — the same found in the iPad — making it the first non-tablet Apple product to support Centre Stage. But initial reviews have found the camera’s quality to be “not great,” though Apple says the problems can by fixed with a software update (yes, a software update for an external monitor).

One interesting thing about this monitor is that it’s actually running an A13 Bionic, the same chip found in the iPhone 11 line; Apple says it uses this chip for features like Centre Stage, Spatial Audio, and “Hey Siri.” We’ll have to see if the company takes advantage of this chip to implement additional features in the future, seeing as they’re already rolling out software updates.

The monitor also comes with four USB-C ports, one of which is Thunderbolt. It supports displaying and charging through a one-cable setup, which means you can work on the big screen for as long as you need to, knowing your laptop is charging should you need to hit the road.

The display market offers a your of other displays that offer many of these features (and more) for substantially less money. And a new offering from Samsung might be the best of them all.

If you’re looking for something like the Studio Display but don’t want to take out a second mortgage, Samsung’s latest monitor, the Smart Monitor M8, is enticing. Design-wise, the display looks very Apple, and is available in four different colour options (White, Green, Pink, and Blue). It’s 32 inches, offering an additional five inches of screen real estate over the Studio Display, but at a lower, 4K resolution. That said, 4K is the standard for a high-resolution display, so that’s not really a knock unless you need a 5K panel. It supports HDR 10+, too, which is a huge advantage over the Studio Display. HDR content on this display really pops.

While it doesn’t come with a built-in webcam, Samsung ships its SlimFit camera in the box. This camera connects to the back of the monitor for a low-profile look, and is completely detachable, so you don’t have to stare at the SlimFit all day if you don’t need it to be there. It comes with both Bixby (Samsung’s smart assistant) and Amazon Alexa, and you can still use Siri through your Mac if you connect it.

Speaking of connections, the M8 supports AirPlay, making it easy to stream content from your iPhone, iPad, or Mac without plugging in any cables. If you do want to connect via a cable, this monitor also supports a single plug-in for displaying and charging, just like the Studio Display.

It’s also a smart TV in its own right, allowing you to stream shows and movies from Samsung TV Plus without the need for a laptop or streaming device. I’ve only used it while connected to my laptop, so this isn’t a feature I’m likely to take advantage of. But hey, it’s an option.

But what really makes the M8 stand out against the Studio Display is the price: The white model goes for $US699 ($970), while choosing the blue, green, or pink options add another $US30 ($42). That means Apple’s Studio Display starts at more than double the price. When you compare the two side-by-side, it’s hard to recommend the Studio Display — Samsung’s Smart Monitor M8 is clearly the better value.