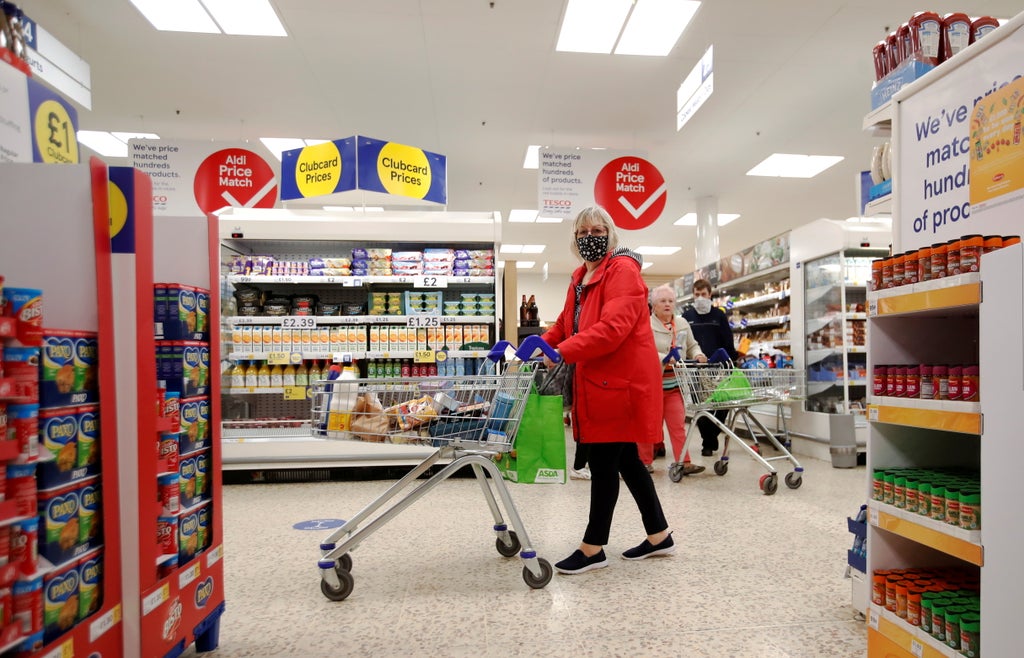 Several major supermarkets including Tesco, Sainsbury’s and Waitrose have said they are facing problems, as staff and delivery drivers are forced to isolate after coming into contact with someone with Covid-19.

Asked about a warning from Iceland managing director Richard Walker, Kwasi Kwarteng told BBC Radio 4’s Today programme: “He was right to say shoppers shouldn’t be panicking. I don’t quite know what he meant that the Government should be panicking, I’m not panicking.”

It came after the British Meat Processors’ Association warned the UK’s food supply chains are “right on the edge of failing” as Covid-19-related absence aggravates a critical shortage of labour.

Meanwhile airports across the country prepare for the busiest weekend of the year, with reports more than 2,100 flights will carry up to 393,000 passengers to major European destinations after most schools break up.

Kwarteng is confident government will win vote on vaccine passports

Business Secretary Kwasi Kwarteng has expressed confidence that the Government would win a vote on vaccine passports but suggested it may only be a vote on the “concept” of their use.

He told BBC Radio 4’s Today programme: “You can never predict parliamentary votes but we’ve got a majority of 80 and I’m very confident we can pass the legislation we require.

“I don’t know what the proposed vote will be, you can never tell what the actual vote in the House of Commons in terms of the wording and what the position is.

Asked about a warning from Iceland managing director Richard Walker, he told BBC Radio 4’s Today programme: “He was right to say shoppers shouldn’t be panicking.

“I don’t quite know what he meant that the Government should be panicking, I’m not panicking.”

Iceland’s managing director has urged shoppers not to panic-buy

The managing director of Iceland has said staff absence rates are now double the usual number, with the figure rising 50 per cent “week on week” due to people being told to self-isolate by the NHS app.

Richard Walker told the Radio 4’s Today programme: “We’ve now got over 1,000 staff off, who are who’ve been pinged. That’s double the normal rates, and it’s rising at 50 per cent week on week.

“Our big concern is that we’ve kept all of our shops open throughout the pandemic, but now we have had to close one or two shops and reduce hours in others.

“But that could get a lot worse a lot quicker, unless the country’s system is sorted out.”

Mr Walker urged shoppers not to panic-buy, saying: “There is certainly no problem with supply of stock.

“Panic-buying is only an option for those who can afford it and it often means that others go without.”

Self-isolation rules could be amended for people working in food supply, head of the British Retail Consortium suggests

The head of the British Retail Consortium has suggested rules around self-isolation could be amended for people working in food supply chains following rising levels of staff absence.

“Either those (self-isolation) rules need to change or something else in the wall of defences against the virus needs to be considered,” Helen Dickinson told BBC Breakfast.

Ms Dickinson said she was not calling for the app to be ditched but added: “I want to be really clear that the … disruption that we are already seeing will only get worse.”

She said bringing forward the date double-vaccinated people will not need to self-isolate if they come into contact with a Covid-19 case could be one solution.

“There are some pilots for tested release for businesses and people who get paid to test themselves and then released back into their workplace, those pilots could be extended or that could be a new system,” Ms Dickinson said.

List of critical workers eligible for loosened isolation rules will be drawn up soon, says Kwarteng

Business Secretary Kwasi Kwarteng has said a list of critical workers who will be eligible for loosened isolation rules if pinged by the Covid app will be drawn up “very soon”.

No 10 has previously said “we’re not going to be producing a list covering individual sectors”.

Mr Kwarteng said he was “very concerned” about the situation following reports of shortages on supermarket shelves.

He told Sky News: “We’re going to announce a list of exempt workers. The list of exemptions will be quite narrow because, obviously, you have to draw the line somewhere.”

Mr Kwarteng would not say who would be on the list or say whether it would come this week, but insisted it would be “very soon”.

People in England are being urged to continue wearing face coverings in crowded places, and use the NHS Covid-19 app to check in to venues, despite legal requirements to do so being lifted.

An official information campaign, which will hit airwaves, newspapers and other media from Thursday, will see the Government replace its “hands, face, space, fresh air” slogan with its new catchphrase: “Keep life moving.”

The campaign video fronted by TV doctor Dr Amir Khan will also recommend people continue to follow social distancing guidance, as the film shows a young man stepping off a pavement to allow an older neighbour to pass.

The advice comes despite Monday being trumpeted as England’s “freedom day”,

A food distribution company struggling with staff shortages is advising workers who are pinged by the app to follow a testing regime and continue working, in breach of the Government advice.

Bidfood chief executive Andrew Selley told BBC Radio 4’s Today programme: “We know that they’re critical workers as part of the food supply chain, so if people are obviously positive or contacted by Test and Trace then they will have to isolate.

Told the Government advice is otherwise, he said: “We think that’s appropriate and safe. The ping is advisory. We operate in Covid-safe workplaces and we’re absolutely key workers in terms of the supply chain to hospitals, care homes, prisons, and therefore it’s important for us to be able to keep offering that service to our customers.”

…and welcome to Thursday’s coronavirus live blog! We’ll keep you up to date with the main developments throughout the day.

The Matildas loss to Sweden hinged on two key moments, but their Tokyo Olympics has been a great success