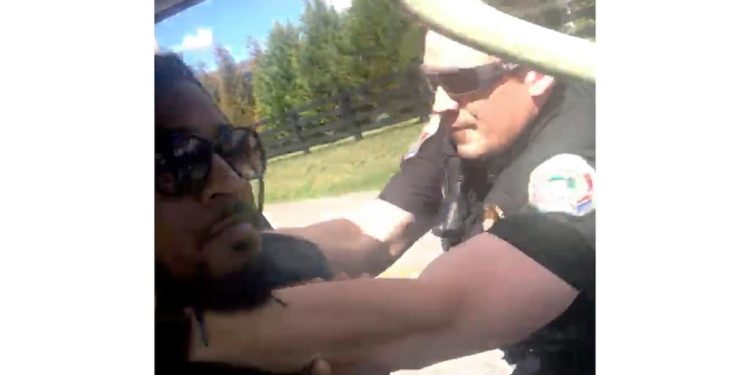 “Get out!” the police officer ordered, pointing a Taser at Gordon, according to the video. The officer, whom the Collegedale Police Department has not identified, accused Gordon of not providing his identification, the video shows.

“Sir, I feel uncomfortable,” Gordon said. “Please get your supervisor.”

The officer then tried to pull Gordon out of the car. When Gordon did not comply, the officer pulled out his Taser again.

A moment later, video shows, the officer used the Taser on Gordon, who screamed in agony.

The footage, captured by Gordon, only shows 49 seconds of the incident. But his lawyer, who released the video Friday “to spark conversation in the community” and “raise awareness,” said the interaction had escalated too quickly.

Gordon, who Wheeler said was unarmed, was charged with resisting arrest and obstruction of justice. Wheeler said his client is focused on “dealing with these charges.”

Gordon “has no criminal history and we want to keep it that way,” Wheeler said.

Without describing the incident or naming Gordon, the Hamilton County district attorney’s office requested that the county sheriff’s office investigate a March 10 traffic stop by the Collegedale Police Department, involving a driver facing the same charges as Gordon. In a March 15 Facebook postthe Collegedale Police Department said it “will be cooperating fully” with the sheriff’s probe and added that it is conducting its own investigation.

“We anticipate a release of the full body camera video and Internal Affairs report, as soon as those investigations are closed,” Lt. Jamie Heath of the Collegedale Police Department told The Washington Post in an email, declining to comment further or identify the officer.

The incident comes as police departments across the country are training officers in de-escalation techniques meant to defuse a situation and prevent the use of force. De-escalation involves officers being patient, creating distance between themselves and armed subjects, and calling supervisors to the scene, according to the Police Executive Research Forum. In many situations, the organization wrote in a 2016 policing guidede-escalation will result in “a better outcome.”

Law enforcement agencies have also been reviewing how Tasers are used. In a 2017 investigationReuters reported that there had been 1,005 cases since the early 2000s in which people died after police used Tasers on them.

The March 10 incident in Collegedale, Tenn., about 15 miles east of Chattanooga, began when the officer pulled over Gordon for speeding, although Gordon “never believed he was speeding,” according to Wheeler. When Gordon questioned the officer about why he was pulled over and requested a supervisor, “things got out of hand,” Wheeler said.

At some point in the interaction, Gordon started to record with a camera mounted inside his car. The video opens with the officer pointing a Taser at Gordon and appearing to threaten to discharge it if he doesn’t get out of the vehicle.

“You can’t do that, officer, because I called for your supervisor,” Gordon tells him.

Although he refuses to get out of the car, the video does not show Gordon threaten the officer.

When Gordon tells the officer that he’s “uncomfortable” and again asks him to get his supervisor, the officer puts his Taser away, grabs Gordon and tries to pull him out of the car.

“Please stop!” Gordon says. Seconds later, he says: “Please don’t hurt me. Why are you doing this?”

After about 15 seconds of trying to pull Gordon out of the car, the officer moves back, pointing his Taser at Gordon.

After the officer fires the Taser at Gordon, Gordon says: “Oh my God! That’s not lawful, sir!”

Wheeler said the public should be able to have “respectful interactions” with police without a situation escalating as it did in Gordon’s case. He added that Gordon was “fearful” in the moment “because he’s never dealt with an irate officer.”