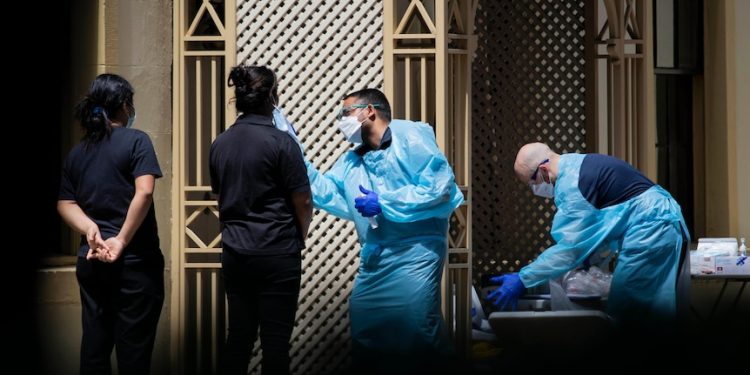 
Aged care providers are casting doubt on the federal government’s commitment to finish the booster rollout in aged care by the end of the month, with data revealing the program slowed dramatically over the Christmas-New Years break.

Providers say while significant staffing shortages are placing pressure on the rollout, they are working to get doses administered as quickly as practically possible.

Booster doses have been administered in 1,700 facilities so far, of roughly 2,700 nation-wide.

Hundreds of aged care centres are managing outbreaks at present, with thousands of active cases adding urgency to the rollout effort.

Tim Hicks from industry body Leading Age Services Australia said their facilities were down about 25 per cent of their staff on average, with some were down 50 per cent.

He said staff were doing their best to get boosters into residents’ arms, but some appointments were having to be rescheduled.

“Providers are still proceeding with their skeleton staff to support the rollout of booster clinics,” he said.

“Even when there are these staffing shortages and providers are struggling to deliver essential services, they’re doing what they can to make sure that the boosters happen.

“There may be circumstances where on a particular day, a booster clinic needs to be rescheduled because of a dire staffing circumstance a particular service is facing, but that’s very much the exception.”

LIVE UPDATES: Read our blog for the latest news on the COVID-19 pandemic

The federal government insists the program remains on track to reach all facilities by the end of January.

But Mr Hicks said while it will come close, that target might not not be possible.

“While we’re not as far along as we’d like to be, given the number of cases we’ve seen, we have a plan to complete the rollout very quickly,” he said.

The federal opposition has criticised a significant slowdown in the aged care rollout over the Christmas and New Year period.

The number of vaccine doses administered in aged care and disability went from nearly 4,000 a day in the week leading up to Christmas, to no more than a 500 a day in the two weeks following.

On some days, just a handful of doses were administered.

It has now increased, with nearly 1,700 doses recorded on Tuesday.

As Omicron moves in, Australia is facing a predictable tragedy in aged care 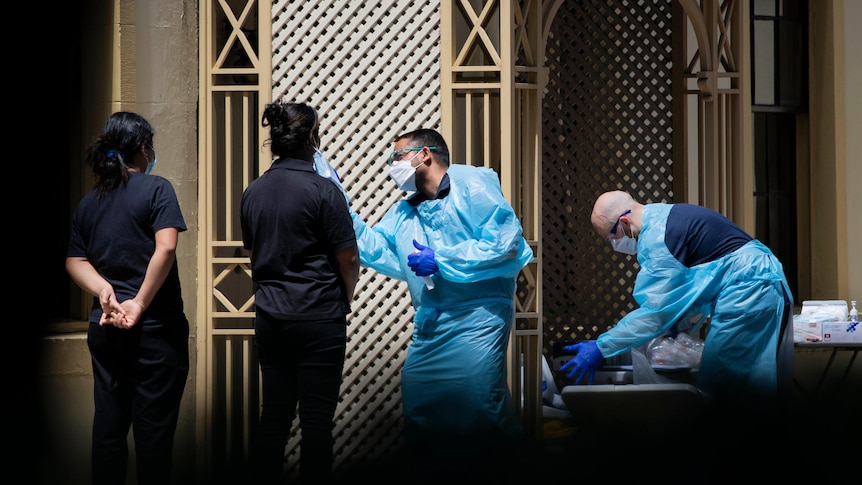 Today, there are tens of thousands of elderly people sitting alone in their bedrooms in nursing homes — some with COVID, more being tested, others stuck there because of management’s well-founded fears.

Aged Care Services Shadow Minister Clare O’Neil said it was reasonable for staff to take a break over Christmas, but the rollout should not have slowed so dramatically.

“I understand a couple of days to take a breather, completely, but COVID doesn’t know that it’s the Christmas holiday,” she said.

“The government’s got to get to work and make sure that we’re protecting people as we go into the peak of the worst outbreak that we’ve had in the country so far.”

Mr Hicks said part of the reason for the slowdown was that rollout plans were drawn up before the surge in cases began, and before changes to the waiting period between second doses and boosters were made.

“The slowdown in booster doses — indeed, many of the difficulties that we are now facing — relates to the fact that we didn’t plan for growth in cases of this magnitude,” he said.

“We didn’t make decisions to lower the delay for getting a booster until very late.

“And so we are behind where we would like to be.”

Minister says ‘every effort’ being made

Those running the booster rollout say the timing of booster clinics in aged care homes is a decision made in consultation with facilities.

A spokesperson for Health and Aged Care Minister Greg Hunt said they remained confident the January timeline was workable.

“All facilities are due for completion in January, well ahead of the original schedule,” they said

“Every effort is being made to prioritise the vaccinations for aged care residents.

“It is disappointing that Labor is only interested in playing politics with senior Australians, rather than acknowledging that Australia has had one of the lowest level of loss of life in aged care from the pandemic.

“Due to staffing requirements, some facilities had requested not to have a clinic during the Christmas/New Year period as was also the case with many state clinics during that time.”