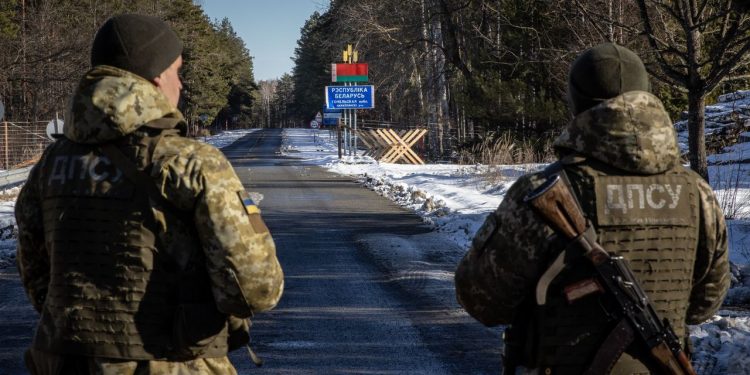 
The Nasdaq Composite Index gave up gains, while the S&P 500 and Dow industrials extended a decline, during afternoon trading as the U.S. announced the closure of its Kyiv embassy and allies warned of an imminent attack by Russian forces on Ukraine.

What are indexes doing?

Stocks turned lower in afternoon trading after Secretary of State Antony Blinken said the U.S. was closing its embassy in the Ukrainian capital of Kyiv and relocating operations 340 miles west to Lviv near the Polish border. As part of the move, the State Department ordered the destruction of networking equipment and computer workstations and the dismantling of the embassy telephone system, The Wall Street Journal reported, citing U.S. officials familiar with the matter and internal communications reviewed by the newspaper.

Worries over Ukraine had appeared to ease somewhat earlier on Monday, after Russian Foreign Minister Sergei Lavrov suggested continuing talks with the U.S. and its allies over security issues. Ukraine has resisted giving in to Russian demands and German Chancellor Olaf Scholz shuttled between the two nations in an attempt to stave off a military invasion.

With markets focused on the threat of a Ukraine invasion, RBC Capital Markets told investors that stock-market drops ahead of war tend to resemble “growth scares.” The S&P 500 index fell more than 19% from peak to trough during the 1990 Gulf War, a drawdown associated with a recession that year, according to RBC analysts. And the U.S. stock benchmark’s 33% drop around the second Iraq war in 2003 came as “investors were also wrestling with the aftermath of the Tech bubble, as well as the accounting scandals that marked the early 2000s,” they said.

“On Russia/Ukraine, there’s no past conflict that provides a good template for how low stocks could trade if an invasion occurs,” RBC analysts led by Lori Calvasina, head of U.S. equity strategy, said in a research note Monday. “But we have found it interesting that stock market declines around the two Iraq wars were similar to the kinds of drops we see around recessions” and growth scares.

Read: What a Russian invasion of Ukraine would mean for markets as Biden warns Putin of ‘severe costs’

In central bank developments, St. Louis Fed President James Bullard reiterated his call for the Fed to “front load” rate increases in the face of persistently high inflation. In an interview with CNBC Monday, Bullard said he didn’t think the Fed’s rate moves would sink the economy or deeply unsettle financial markets.

Meanwhile, Kansas City Fed President Esther George said, in an interview with The Wall Street Journal published Monday, that it’s too soon to say whether a 50-basis-point rate increase is needed in March and she reiterated her call for the Fed to begin selling assets from its nearly $9 trillion balance sheet. George, like Bullard, is a 2022 voting member of the rate-setting Federal Open Market Committee.

Earnings season is moving into its final stretch. Of the 358 companies in the S&P 500 that had reported earnings through Friday, 78.2% reported earnings that came in above analyst expectations, while 18.2% missed forecasts, according to Refinitiv. Over the weekend, Goldman Sachs updated its S&P 500 year-end forecast, dropping it to 4,900 from 5,100, which is still 11% higher than where prices closed Friday.

Need to Know: Goldman Sachs sees three paths for the S&P 500 —and one would leave stocks nearly 20% lower

“With the stock market continuing to be priced at all time highs, even with the recent selloff, any negative events will cause significant volatility in the markets,” Nick Tell, chief executive of Armory Group, said in an email to MarketWatch. “This is a time of great uncertainty and I expect that there will be more downside in asset valuations until we start getting a better sense of what the Fed plans to do or we get a real correction that resets values in line with historical metrics.”

What are other assets doing?

— Steven Goldstein contributed to this article

Rams can finally celebrate being an enduring part of L.A.