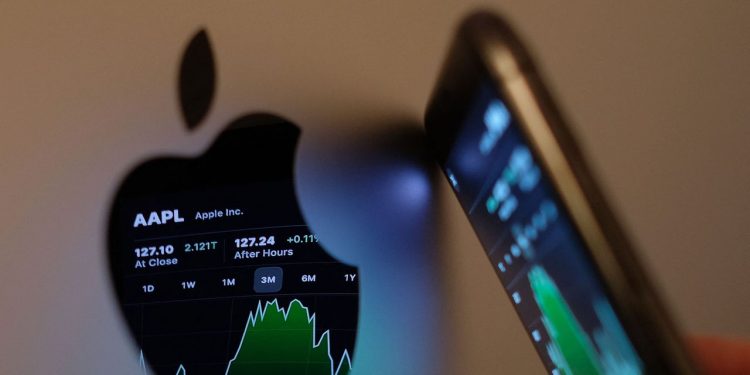 How are stock indexes performing?

Shares of Amazon AMZN were down more than 15% Friday afternoon, after reporting its first loss in seven years. The company’s slide made it the biggest loser in the S&P 500 index in afternoon trading, according to FactSet data, at last check.

Friday marks the last trading day of April, which is heading toward being the worst month for the S&P 500 — down 5.3% through Thursday — since March 2020. The Nasdaq was already down 9.4% through Thursday and is also facing its worst monthly return since that pandemic low, according to FactSet.

The month has been consumed by worries on several fronts, including economic growth in China where COVID-19 cases are forcing lockdowns in several cities as well as supply chain disruptions caused by Russia’s war in Ukraine.

“There’s a lot for the market to be grappling with right now,” said Reynolds.

The CBOE Volatility Index
VIX,
+10.00%
was trading around 31 on Friday afternoon, well above the 200-day moving average of about 21.5, according to FactSet data.

“The petrified tail-chasing we have seen this week as equity markets swing from ‘we’re all doomed, get me out,’ to ‘I don’t want to miss the absolute bottom of the stock market, get me in’ is perhaps indicative of the state of confusion out there,” Jeffrey Halley, senior market analyst at Oanda, told clients in a note.

The headline rate of inflation climbed 6.6% over the 12 months through March, up from 6.4% in February, for the steepest increase since 1981, as measured by the PCE price index. But the rate of core inflation over the past 12 months slipped to 5.2%, from 5.3%, marking the first month-to-month decline in more than a year.

“The slowdown in year-over-year core PCE inflation is really nice to see. Inflation may have peaked in March, although the evidence is still a little ambiguous,” said Bill Adams, chief economist for Comerica Bank, in a note.

See: U.S. inflation rate surges to 6.6% based on PCE index — but there’s a silver lining

Adding to inflation worries, U.S. employment cost index accelerated in the first quarter to 1.4%, from 1.0% in the final three months of 2021, according to data released by the Labor Department Friday.

Meanwhile, the University of Michigan’s final reading of U.S. consumer sentiment in April slipped to 65.2 from an initial reading of 65.7, but still marked the first rise so far this year.

Friday’s economic data comes ahead of next week’s two-day Federal Reserve meeting, which many expect will conclude with a 50 basis-point interest-rate increase.

Also, billionaire investor Warren Buffett and his right-hand man Charlie Munger will be in the spotlight Saturday as investors return to Omaha for Berkshire Hathaway Inc.’s
BRK.A,
-2.57%

BRKB,
-2.58%
annual meeting. The event, dubbed “Woodstock for Capitalists,” had been held virtually the last two years due to COVID-19.

How are other assets faring?

—Barbara Kollmeyer contributed to this report.

Ukraine: Attack on Kyiv was Putins middle finger to UN – The Associated Press