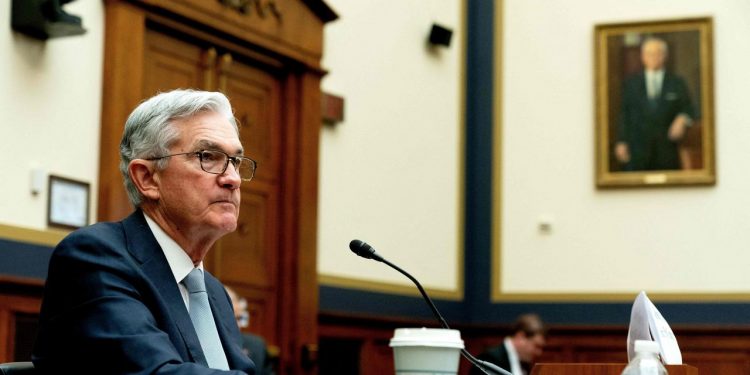 U.S. stock indexes finished sharply higher Wednesday, with gains gathering steam after Federal Reserve Chairman Jerome Powell outlined plans to begin dialing back the central bank’s easy-money stance to fight inflation, while playing down the prospect of a larger-than-usual increase of benchmark rates in March, in testimony on Capitol Hill.

Wall Street also monitored headlines indicating Ukraine and Russia could be headed for new negotiations, even as the conflict simmered.

How did stock benchmarks end?

What drove the market?

Stocks erased sharp losses from a day earlier after Fed Chairman Powell testified that it would be appropriate for the central bank to raise its benchmark interest rate, currently in a range between 0% and 0.25%, at its meeting in two weeks. Powell said he supported a 25 basis point increase, rather than a larger 50 basis point increase, and would propose such a move when the Fed convenes its two-day meeting mid March.

Fed-fund futures were pricing in a near-zero chance that the Fed would raise interest rates by a half-point in March, a dramatic shift from recent weeks. The 10-year Treasury rate
TMUBMUSD10Y,

Powell’s testimony “did clarify his and the Fed’s approach to withdrawing stimulus in 2022 amid increased uncertainty from the Russia-Ukraine conflict,” said Bill Adams, chief economist at Comerica Bank, in written comments, adding that Powell sees the maximum employment part of his mandate as largely fulfilled.

“With inflation at a multidecade high, the Fed is anxious to get off of a crisis footing,” Adams said, while also looking to “cool demand enough to get inflation under control, but not choke off the recovery.”

Comments from monetary policy makers come as investors also watched headlines from the seventh day of conflict in Ukraine that has seen Russian forces step up shelling of civilian areas.

Moscow continued to pound Ukraine’s second-largest city, Kharkiv, on Wednesday, with both sides indicating they were ready to resume talks to end the fighting. The U.N. General Assembly voted on Wednesday to condemn Russia’s Ukraine invasion, while calling for an immediate end to the clashes.

settling at $110.60 a barrel on the New York Mercantile Exchange, the highest level in about 11 years, according to FactSet data.

The U.S. and other countries in the International Energy Agency agreed on Tuesday to release 60 million barrels of oil from their emergency reserves, to help with any supply shortfall caused by Russia’s invasion of Ukraine. Also, OPEC+, made up of the Organization of the Petroleum Exporting Countries and its allies, including Russia, offered no surprises at its monthly meeting, quickly agreeing to boost production in April by another 400,000 barrels a day.

Even so, Carey said it remains difficult to know how to position a portfolio, given uncertainties around how far Putin intends to take his attack on Ukraine. “I think there will be continued volatility like the swings we are seeing in the market, one day to the next.”

President Joe Biden delivered an optimistic State of the Union speech on Tuesday evening, saying that America is “stronger today than we were a year ago,” even as war rages on in Eastern Europe and concerns about inflation linger domestically.

See: Zelensky says Putin is now resorting to the tactics of a terrorist in Ukraine offensive

In economic reports, the Fed’s Beige Book survey of economic activity showed modest expansion in the final weeks of last year on continued supply-chain disruptions and labor shortages, but also a pullback in leisure travel due to the omicron variant.

How did other assets fare?

—-Barbara Kollmeyer contributed to this article

Who will win after SAG awards set benchmark

Who will win after SAG awards set benchmark