For the past week or so I have had a constant muscle twitch on the underside of my right thigh, which is most noticeable when I am at rest. My stress levels are high, as my wife has been very poorly. Also, I take a drug called allopurinol for my gout. Could either of these be the cause?

WE all get strange muscle twitches from time to time – most commonly affecting the eyelid when we are tired. These often occur on and off for a few hours, and while annoying, generally aren’t anything to worry about.

Twitches in the legs are common too. A rule of thumb would be not to worry if they last less than two weeks and are not associated with any other symptoms, for example pain, weakness or numbness. 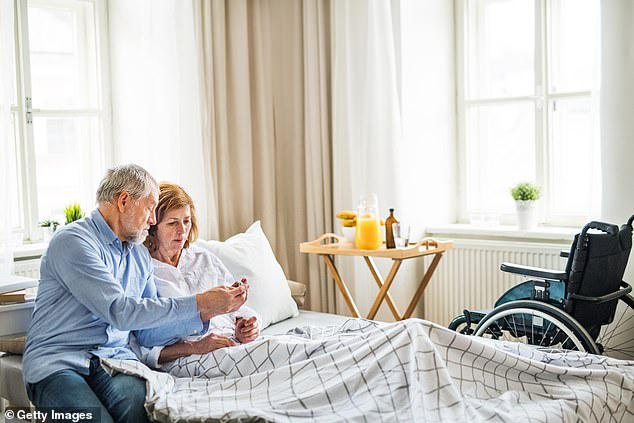 Today’s reader is seeking advice having developed a muscle twitch since he started caring for his wife who is ill. The reader fears the twitch could also be a response to his gout treatment

Some patients do indeed find they are linked to tiredness, stress and anxiety. High intakes of caffeine or alcohol also seem to be a factor – these substances affect the nervous system, and one result can be little twitches and shakes.

In the first week of an ongoing twitch, I would advise rest and relaxation as well as stretching for the hamstrings if the back of the thigh is affected. A massage can also help.

Certain medications, including some blood pressure pills, can cause twitching, although it’s not thought to be a side effect of allopurinol. If the problem persists, a GP may recommend electrophysiology tests, to look at the function of the nerves and muscles.

A very rare cause is motor neurone disease, although this would usually be accompanied with other symptoms early on, such as leg weakness or cramps.

My doctor has diagnosed my bowel problems as bile acid malabsorption, but didn’t really explain what it means or whether there are certain foods I should avoid. Can you help?

Bile acid malabsorption is a condition that occurs when your intestines can’t absorb bile salts properly. These salts digest fat from food and are released from the gall bladder into the bowel, before being absorbed back into the body further along the gut.

More from Dr Ellie Cannon for The Mail on Sunday…

If this gut area is damaged, or not functioning properly, the bile salts can end up in the colon, the last part of the bowel where faeces are formed. This draws more water into the lower bowel, resulting in diarrhoea.

It is sometimes mistaken for irritable bowel syndrome.

Bile acid malabsorption is usually diagnosed by a gastroenterologist. It can be caused by bowel surgery, Crohn’s disease, coeliac disease or bacterial overgrowth in the intestine – a condition where the small intestine becomes colonised with harmful bacteria.

But for some people, there is simply no obvious cause.

A strict low-fat diet can help, but should only be undertaken with advice from a qualified dietician. This sort of diet is not recommended for anybody with a history of weight loss, or low body weight, as fat is an important source of energy.

These fats, often found in foods such as cow’s milk or coconut oil, help as they don’t need bile salts to be digested, potentially averting the problem. Medications to stop the bile acid irritating the intestines are usually taken as powder or tablets but you may need to stay on them for life.

My husband has been having annual screening for his abdominal aortic aneurysm, but his last one was cancelled due to Covid. Should I be worried by the delay?

abdominal aortic aneurysm is a potentially fatal problem where the main artery of the body, the aorta, forms a bulge where there is a weak spot in the artery wall.

If this ruptures, it’s almost always fatal. The problem is there are rarely any warning signs that it’s about to.

For reasons which remain unclear, it affects four times as many men as women, killing about 6,000 men a year in the UK. In 2009, the Government set up a screening programme to measure the aorta in all men once they turn 65.

Screening is carried out with an ultrasound of the abdomen, and in men who are found to have an aorta less than 3cm in diameter (just over an inch), no further screening is offered.

If it is above 3cm but less than 4.4cm (about an 1.5in), this is a small aneurysm and regular screening will be offered – usually annually – to monitor for swelling.

If someone is usually screened annually, it means they could be at risk, so ongoing screening is really important. I would recommend contacting the local service (search online for NHS AAA screening programme) and see when it is now due. If it’s likely to be a very long delay, speak to a GP about arranging a scan.

No more doomscrolling for me!

Towards the end of last year, I found I was spending too much time on social media. I had become the ultimate ‘doomscroller’, constantly searching for news about Covid.

In my mind, I was doing it to unwind, but in fact it was having the opposite effect. So enough was enough. With the help of my teenage children, I set up an app on my mobile – called Screen Time – which measures how long you spend doing specific things.

I have told it particularly to limit my time on Twitter. It turns the Twitter app off after an hour of total use, which I thought was generous. Imagine my shock when on New Year’s Day, Twitter quit mid-morning.

I dread to think how many hours I spent in 2021 reading miserable news. Here’s hoping for a more relaxing, positive and productive 2022.

So Novak… which of these exemptions applies to you?

I can’t think of a single reason that would exempt tennis star Novak Djokovic , or anyone else, from being vaccinated against Covid.

Rare allergies may mean someone can’t have a Pfizer jab, but they would have an AstraZeneca one instead. A history of blood clots may stop someone having an AstraZeneca vaccine, so they can have a Moderna one. 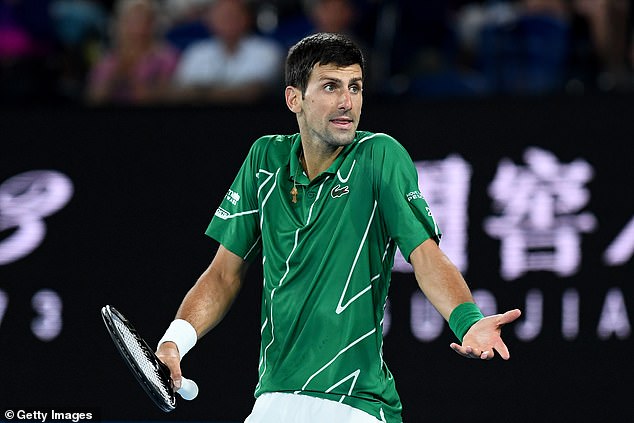 I can’t think of a single reason that would exempt tennis star Novak Djokovic , or anyone else, from being vaccinated against Covid

If you are due to undergo brain surgery, you might be advised to postpone having a jab, just in case you suffer a reaction that might complicate your treatment. If you are having certain cancer treatments, you may need to wait, as some cancer drugs can make the jab less effective. If you’ve had Covid, you have to wait a month before having the shot.

We give these vaccines to people who are living with extremely complex health problems and those who are incredibly frail, and it’s been a lifesaver to them.