DR ELLIE CANNON: What’s the point of a prostate MRI scan if I haven’t got cancer?


For many years I have had an enlarged prostate, and my PSA blood tests are extremely high.

But a biopsy and two MRI scans show I don’t have cancer. They want me to have another MRI scan.

I really don’t want to as it makes me claustrophobic.

Should I have it just in case?

A blood test called a PSA test checks for signs of prostate cancer, among other problems with the prostate.

PSA, or protein specific antigen, is a protein in the blood. High levels are considered a marker for possible cancer, but it can often be high due to many other conditions.

This includes inflammation of the prostate, known as prostatitis, as well as the common condition benign prostatic enlargement. 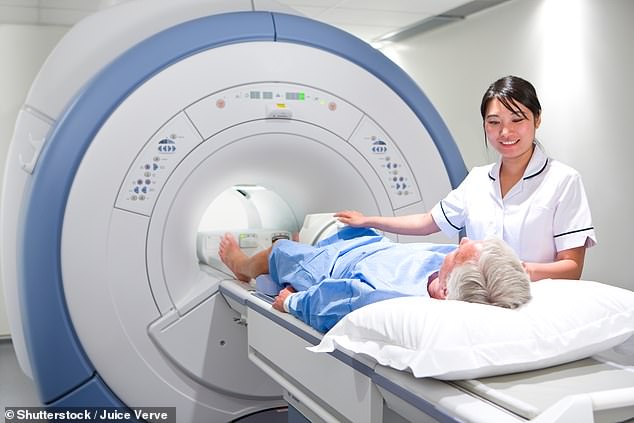 PSA tests are therefore useful but not fully reliable to diagnose or screen for prostate cancer.

In fact, we know the tests can lead to false positive results.

MRI scans of the prostate are helpful to avoid unnecessary biopsies – when doctors take a sample of tissue to check for cancer – which are invasive and painful. MRI scans can rule out cancer, and should be offered before a biopsy.

If a PSA test is consistently high despite two MRI scans and a normal biopsy, the urologist and patient can decide, together, not to investigate further.

This depends on how much time has passed since the last MRI, and other risk factors. For example, prostate cancer is far more common in black men and men over the age of 70.

An MRI scan is considered low risk because it is non invasive and painless. Having said that, some people find them incredibly uncomfortable, so some clinics offer upright MRI scanners or wide-open types to make the process less of an ordeal.

It might be useful to ask the doctor to perform several PSA tests over the course of a few months, to see if the levels climb significantly. The pattern may help doctors to decide whether pressing on with investigations is a must.

My hair is falling out!

I am very fit and have adequate levels of iron and thyroid hormones, according to checks performed by my doctor.

The problem is causing me great distress. Is there anything that can be done?

Hair loss might sound like a trivial problem, but it can be incredibly upsetting for both men and women.

There are lots of potential medical reasons for losing hair.

More from Dr Ellie Cannon for The Mail on Sunday…

The first is an under-active thyroid – the butterfly-shaped gland in the neck responsible for metabolism. Blood tests to measure how well the gland is functioning are essential.

Hair loss might also be related to iron levels in the body. In blood tests, doctors look for something called ferritin, which indicates the body’s long-term iron stores, rather than the iron circulating in the blood. Ferritin needs to be in the top range of normal for hair to grow well.

Hair loss is also an unfortunate side effect of the menopause, related to the drop in the sex hormone oestrogen. Testosterone becomes more powerful, which can cause a receding hairline, finer, shorter hairs and general thinning. Many women find hair growth and thickness improves after taking hormone replacement therapy. Otherwise, a scalp treatment called minoxidil, prescribed by a GP, can stimulate hair growth.

Other reasons for excess shedding of the hair as well as thinning include crash dieting, stress, accidents and side effects of medications.

Noticing the pattern of hair loss is important for working out the cause.

For instance, are there balding patches, or is it thinning all over? Patchy hair loss can be an autoimmune condition called alopecia areata, whereby bald patches appear quite suddenly.

Although this can appear shocking for those who develop the problem, hair does regrow.

I am confused about how much water I should drink.

I am a moderately fit 76-year-old. I spent most of my life drinking less water than my colleagues but never felt dehydrated.

Recently, my daughter told me to drink more water and I do, but now I have to urinate ten or 12 times per day.

I am getting to an age where I can’t hold back as well as I used to. Is this normal?

This question illustrates the perils of trusting health folklore, rather than scientific advice.

Diet gurus have long been obsessed with water-drinking – how much to drink and how often. But the truth is that most people do not need to be walking around clutching a water bottle.

The standard NHS advice is to have roughly two litres of water daily – about eight small glasses – but this isn’t a hard- and-fast rule. 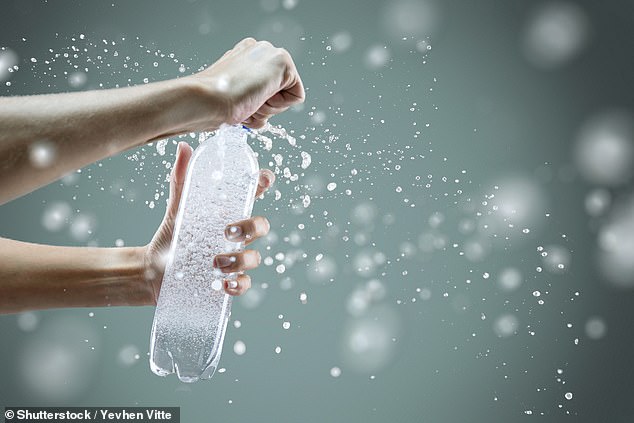 Diet gurus have long been obsessed with water-drinking – how much to drink and how often. But the truth is that most people do not need to be walking around clutching a water bottle

This amount also includes fluid from food and other drinks such as tea, soup, fruit and vegetables.

The amount of water you need also depends on the weather, exercise and on individual health differences.

I argue against the standard two-litre guideline – it’s far more sensible to monitor your urine colour and feelings of thirst, and drink according to that.

There is also no normal when it comes to the number of times to go daily. However, if you often have to go urgently and it becomes inconvenient, it is a sign that too much water is going in.

Like most of you, I expect, I keep hearing about snags and problems with the booster jab rollout.

The most recent report to reach me concerns the husband of a friend who’s currently in hospital, having cancer treatment.

She wants him to have a booster, but the doctors and nurses on the ward say it’s not their job to give it to him.

My friend asked if she could wheel her husband in a chair down the road to a hub, but the answer was no. ‘He’s too vulnerable,’ they told her.

People who are housebound can book to have a shot at home, but he’s likely to be in for a good few weeks, if not longer.

So they’re stuck, boosterless. It’s causing them quite some worry, as the longer people are in hospital, the most likely they are to come into contact with the virus.

I wondered if there was anyone else out there in the same boat, stranded in hospital, with a booster jab seemingly so near, and yet so far?

Write to me and let me know. 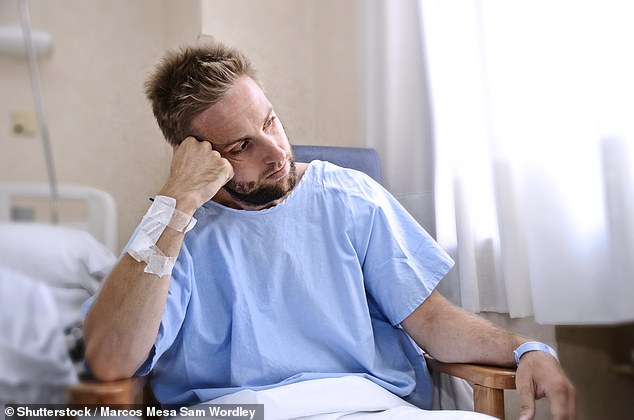 I’m hearing from increasing numbers of patients who are irritated by sky-high prescription charges.

Although there’s a flat fee for one prescription, some patients – such as those with asthma – rely on several items at a time, which can set them back hundreds of pounds.

It’s a problem that I have always been deeply concerned about: specifically, the ridiculous rules governing charge exemptions.

For instance, I am exempt from charges because I have a non-serious thyroid condition. But my patients with severe and chronic asthma are forced to pay.

I’m interested to know if you pay for your prescriptions, and whether you think it’s fair.