Have you made any New Year’s resolutions yet? Although sceptics say not to bother, I think January is the perfect time to make changes — as long as they are simple and realistic.

There’s evidence to back me up on this — a study by researchers at Stockholm University in Sweden found that positive, goal-based resolutions are easier to stick to than those that involve trying to quit a bad habit.

Their results, published in the journal PLoS One in 2020, were drawn from tracking the habits of 1,000 people for a year.

To inspire your own resolutions I have some suggestions, drawn from my experiences and my podcast, Just One Thing — a new series of which you can listen to on the BBC Sounds app from today.

A New Year’s resolution I made years ago and have stuck to, is doing daily press-ups and squats. That’s because they’re not only good for my back and my muscles, but also for my brain.

Professor Damian Bailey, director of the Neurovascular Research Laboratory at the University of South Wales, told me that working against gravity (i.e. by doing squats or press-ups) increases blood flow to the hippocampus in the brain, an area responsible for learning and memory. 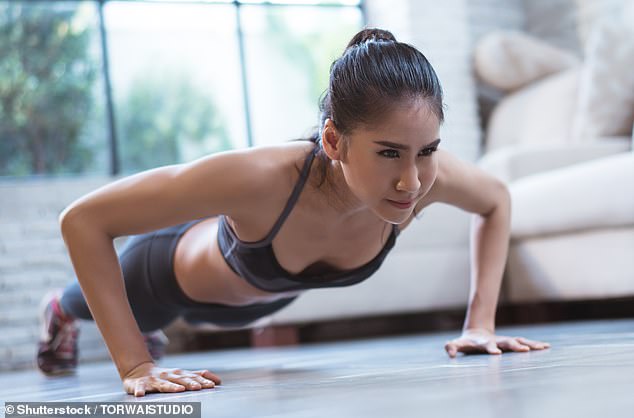 A New Year’s resolution I made years ago and have stuck to, is doing daily press-ups and squats. That’s because they’re not only good for my back and my muscles, but also for my brain

It also stimulates the release of a compound called BDNF (brain-derived neurotrophic factor) that encourages the growth of new brain cells, which is why I call them ‘intelligent’ exercises.

I am now up to around 40 press-ups and squats a day, but it has taken a while.

Begin slowly with just a few a day and if you have an existing back problem or high blood pressure, talk to your doctor before starting.

Despite everything I know about the dangers of too much sugar (it’s bad for your teeth, waistline and brain), I find it impossible to resist biscuits or chocolate if they’re in the house.

Where does this craving come from? Surprisingly, there is increasing evidence that we can partly blame sugar-loving ‘bad’ microbes that live in our guts.

And a good way to counter these and fight cravings is to feed your ‘good’ microbes with fibre. 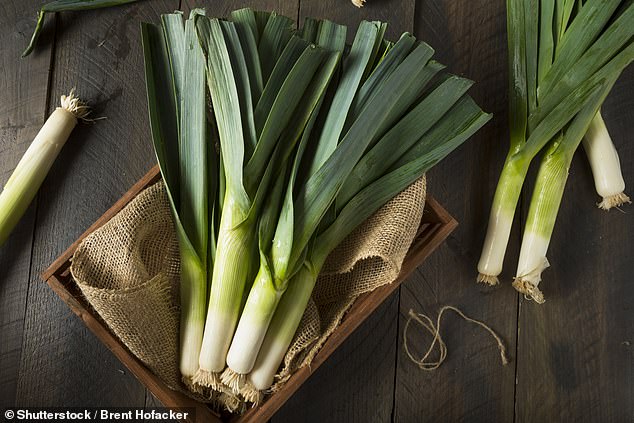 So resolve to include more foods that are rich in inulin — such as garlic, leeks, onions, chicory root, bananas and Jerusalem artichokes — into your diet. And when that sugar craving strikes opt for an apple or handful of fibre-rich nuts

Dr Evelyn Medawar, a neuroscientist at the Max Planck institute in Germany, told me about a recent study she had done where overweight adults were given daily supplements containing either 30g of inulin, a special type of fibre, or a placebo. Her team took poo samples, measured the volunteers’ food cravings and did brain scans. After two weeks, they not only saw positive changes in the microbiome of the inulin eaters, but brain scans also showed their food cravings had reduced.

If you are thinking of going vegan this January, then don’t rely on ultra-processed meat substitutes.

A recent Swedish study found that many contain high levels of chemicals called phytates, which prevent iron and zinc being absorbed by your body.

A better option is less highly processed tempeh, a protein-rich food made from fermented soya beans, which contains low levels of phytates because these are broken down during the fermentation process.

So resolve to include more foods that are rich in inulin — such as garlic, leeks, onions, chicory root, bananas and Jerusalem artichokes — into your diet. And when that sugar craving strikes opt for an apple or handful of fibre-rich nuts.

Put your phone away

I love my phone. It’s my encyclopaedia, navigator, camera and entertainment system. I sometimes even use it to call people.

The downside is that like most adults in the UK, I spend close to four hours a day using it. And if you are spending that much time gazing at a screen, then it is probably interfering with your sleep and your mood.

The good news is that a recent German study, published in the Journal of Experimental Psychology, found that cutting phone use by just one hour a day reduced symptoms of depression and anxiety and increased life satisfaction and time spent being physically active.

One way to cut down, which I’ve found effective, is to put my phone away in a drawer. Out of sight, out of mind.

A lot of people live alone and don’t have anyone close to spend time with, so why not resolve to chat to your nearest neighbours.

According to the Campaign To End Loneliness, half a million older people spend most of the week without seeing or speaking to anyone, and two-fifths of all older people say that the TV is their main companion.

Pamela Qualter, a professor of psychology for education at Manchester University, told me that getting to know your neighbours can have a really big impact on both you and them. 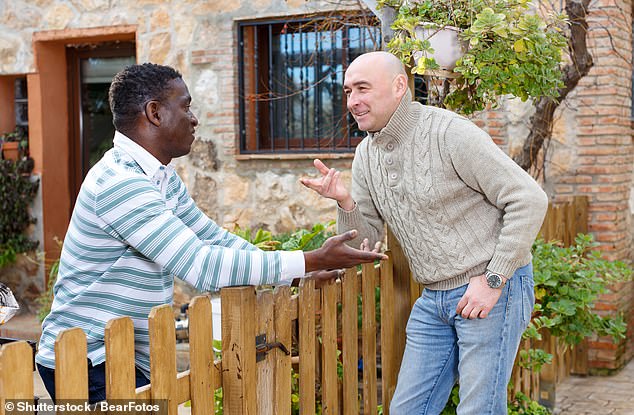 A lot of people live alone and don’t have anyone close to spend time with, so why not resolve to chat to your nearest neighbours

An international study she was part of, called the Kind Challenge, found that performing small acts of kindness for neighbours — such as saying hello — reduces the likelihood of feeling lonely and socially isolated and can make a real difference.

If you haven’t had your eyes checked recently then make a resolution to book a sight test.

A recent eye test revealed I have early signs of cataracts, clouding of the lenses in my eyes.

Getting older, diabetes (type 1 or type 2) and having a family history of cataracts are all risk factors, but the optician told me that prolonged exposure to bright sunlight can also hasten their onset, as well as exacerbating other serious eye conditions such as glaucoma and age-related macular degeneration.

I’ve got new prescription dark glasses and my New Year’s resolution is to wear them when the sun comes out — even in the winter.

I’m also hoping they will help with another New Year’s resolution, which is to look more sophisticated. Some chance . . .

Have you written a thank you note for your presents, or for that delicious Christmas lunch?

Writing thank you notes used to be seen as good manners, but these days a written note is likely to be replaced by a text or nothing at all. Which is a shame because we underestimate the impact a note has. 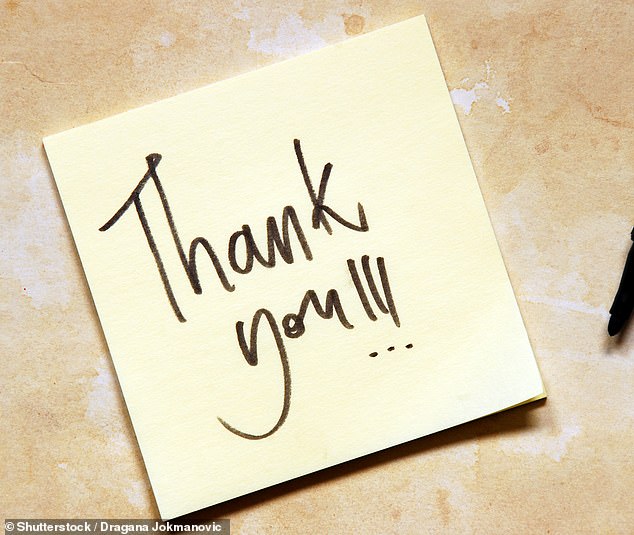 Writing thank you notes used to be seen as good manners, but these days a written note is likely to be replaced by a text or nothing at all. Which is a shame because we underestimate the impact a note has

In an experiment by scientists at Chicago University, people were asked to write a letter of gratitude to someone who’d done something nice for them. It turns out the people writing the note greatly underestimated how delighted the recipients would feel. They also found that people worry about how to express their thanks.

My advice is to stick to the classic structure: thank them for the gift, say why you appreciate it and finish with, ‘hope to see you soon’. It works for me.

Cheers to the drinks you can enjoy without a hangover!

New Year’s Eve is, for many, a time to let your hair down and party. But apart from sticking to a glass or two, is there any scientifically proven way to minimise the hangover that follows?

In a review published in 2008, Dr Joris Verster, a researcher in pharmacology at Utrecht University in the Netherlands, found that darker coloured drinks, which contain more congeners (chemicals that give drinks their colour and taste), result in worse hangovers.

So stick to beer, vodka or white wine and steer clear of brandy or rum.

His team also looked at whether drinking water after consuming alcohol made you less likely to experience a hangover, something I swear by. 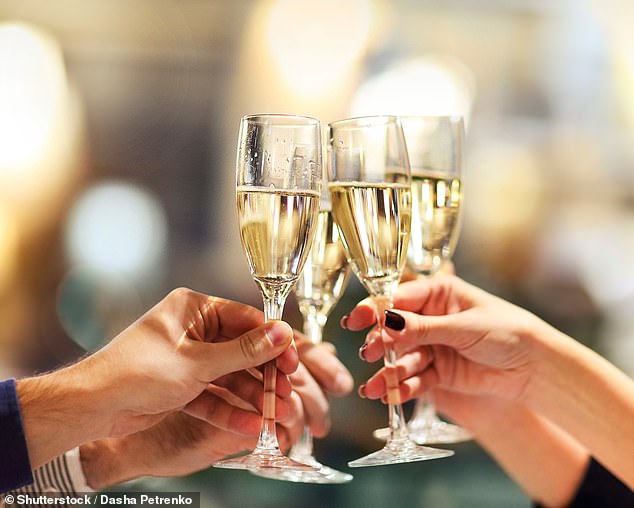 When you wake up the next morning it is probably best not to reach for the paracetamol, because it is metabolised by your liver, which could still be struggling to cope with the alcohol

Yet when the students he was studying were asked to rate their hangovers, after having either drunk or not drunk water before bed, there was no difference when it came to the severity of the hangover.

When you wake up the next morning it is probably best not to reach for the paracetamol, because it is metabolised by your liver, which could still be struggling to cope with the alcohol.

Ibuprofen is a better bet because it does not affect the liver in the same way (although it can irritate the stomach). As for other hangover cures, there is no evidence for the benefits of ‘hair of the dog’ (i.e. more alcohol the next day) or electrolyte drinks.

I have a very low tolerance to alcohol, largely because I have alcohol dehydrogenase deficiency, which means I tend to flush when I drink even modest amounts of booze. It also means I get terrible hangovers. So I will be sticking to my usual modest intake. Probably.

Can board games teach us about the climate crisis? Game creators say yes | Climate crisis