Draymond Green Knows Exactly Who He Is – Defector 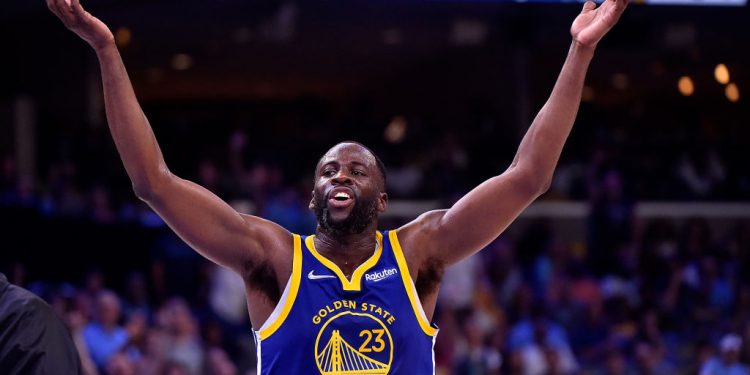 I must say I am glad that the Golden State Warriors pulled out a 117-116 win over the Memphis Grizzlies in Game 1 of the Western Conference semifinals, for no other reason than the fact that we are now all too old and tired to go through another news cycle built around debates about whether Draymond Green intentionally did something dirty, and whether the punishment he received or did not receive was justified. It feels good to leave all that in 2016, and I have no desire to bring it back.

So let’s be brief: In the second quarter of Sunday’s game, Green prevented Brandon Clarke from scoring a bucket by whacking him in the face with one hand, and then yanking his jersey (Green maintains that his hand accidentally got caught in the jersey) with the other hand, hard enough to send Clarke to the ground. The initial call on the play was a common foul, but after review the referees determined that Green had committed a Flagrant 2 foul, and ejected him from the game. Green took a little celebratory lap around the court before heading to the locker room.

The question of whether this was a Flagrant 2 foul and worthy of an ejection (I don’t know! Who knows!) is not as interesting to me as Green’s postgame reaction, which I regret to inform you was given during the recording of an “emergency podcast” in Green’s hotel room. Perhaps also buoyed by the fact that his team had just won a playoff game, Green was fairly relaxed about having received what he thought was an unjust ejection, and acknowledged that the outcome was not exactly surprising given his reputation.

Thankfully, ESPN’s broadcast zoomed in on Green’s face right when the crowd started chanting for him to be thrown out, and right when the thoughts described above were racing through his head. Here we have the look of a man for whom the reality of his situation is starting to set in:

There’s certainly some coping going on here—Green would almost certainly have another championship on his resume if it wasn’t for all the things he’s done to earn that reputation—but at least he seems to be playing with a true understanding of himself. And I don’t think Green is necessarily wrong to point out that all of those technicals, nut-kicks, and other suspension-worthy antics that have created his reputation are bound up with his success as a player. Would he be such a ferocious defender if he didn’t play the game in such a state of near-total agitation that it always leaves him one misstep away from an ejection?

It’s an interesting question to consider, particularly in the context of Sunday’s ejection. What will probably be soon forgotten is the fact that Green started that possession defending Kyle Anderson on the wing, where he stripped Anderson, dove for and missed the loose ball, got back up and defended Anderson all the way to the rim, reacted to Anderson’s drop pass to Clarke, and then committed the foul that got him sent to the locker room. A player who is not Draymond Green, a lesser player, probably would have never stripped Anderson in the first place, and possibly would not have even gotten up from the floor after failing to grab the loose ball. All at once, Green was making the kind of winning, tenacious defensive play that you’ll see from few others in the league, and committing a boneheaded act of violence that sent him packing. Maybe you really can’t have one without the other.