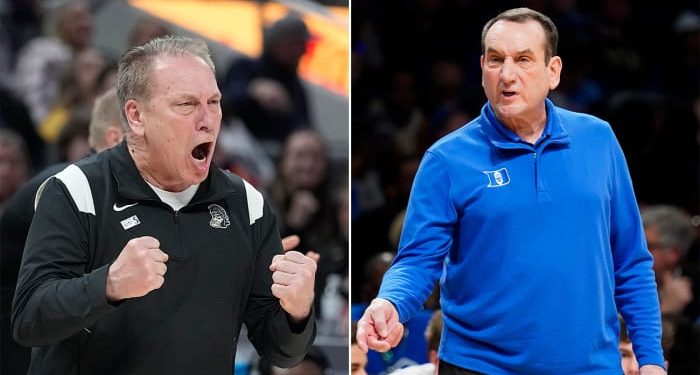 
GREENVILLE, S.C. — On Wednesday after his failed attempt to sidestep the inevitable question about a potential second round matchup with No. 2 Duke, Tom Izzo said, “It would be an honor,” for No. 7 Michigan State to play against Mike Krzyzewski, who he referred to as his “best friend.”

Izzo is 3–12 all-time against Krzyzewski but the last time Krzyzewski played in the NCAA tournament in 2019, it was Izzo who sent him fishing in the Elite 8.

“I like the game, I just don’t like the record in that matchup over the years,” Izzo said. “I’ve gotta be his favorite coach because he’s beaten us like a drum. One more time to play against maybe the all-time great.”

Coach K vs. Izzo storyline aside, both teams will need to make good use of their practice times on Saturday in order to keep their dancing shoes on for next weekend.

Duke took a step forward in comparison to its defensive lapses and lack of toughness over the last couple of weeks.

Still, the Blue Devils struggled against the Titans’ pressure in the first half, committing eight turnovers that turned into 12 points for the Titans.

Duke made adjustments in the second half, limiting miscues with better communication, fighting through screens and hustling to loose rebounds. It executed its defensive game plan to hold Big West Conference leading scorer E.J. Anosike in check with just 10 points, well below his season average of 16.5 per game. The Blue Devils also tied a season high with 10 blocks in the win.

“For us to do well defense is gonna be really important,” said center Mark Williams, who finished with 15 points, seven rebounds, five assists and five blocks in the win. “Communicating and making all the right rotations; that’s huge for us.”

That said, lost in all the “Krzyzewski’s last ride” and “Duke’s NBA talent” storylines are the realization that this is all new to the young Blue Devils.

Forward Paolo Banchero was still giddy Friday night talking about his full-circle moment competing in a tournament where he served as a ball boy in 2015. The extent of Duke’s NCAA tournament experience is graduate transfer Theo John’s scoreless 19 minutes in Marquette’s loss to Murray State in 2019.

“It’s their first NCAA game, and it’s just different,” Krzyzewski said. “The season is so long, and they are a young group, so what they accomplished and won the regular season I thought they took a deep breath. Then we had my screwy weekend and then right away three games in the ACC. There wasn’t really a time to recalibrate; I thought we did that this week. It was good enough for tonight, hopefully we can build on it.”

They’ll need to; the Spartans out-toughed a gritty Wildcats squad for 40 minutes.

Forward Joey Hauser scored a gutsy 27 points, 10 more than he’s scored in a game this season.

“It’s a new season,” Hauser said. “I’ve been just trying to let it fly and not worry about missing shots. Good things happened.”

That good fortune trickled down to guard A.J. Hoggard and forward Gabe Brown, who combined for 26 points in the win. The Spartans also won the battle of fastbreak points (14–9) and second chance points (13–6). That said, Michigan State gave up just as many points as they scored in the paint (32) and expended mind-numbing physical and emotional energy in the win.

For that reason, Hoggard said the Spartans’ focus will be internal.

Izzo’s approach was much different; he leaned into the inevitable storylines against his friend in Durham, praising Krzyzewski for not just elevating Duke, but elevating the sport.

• Caitlin Clark Is College Basketball’s Box-Office Draw
• There’s Still Plenty of Madness to Be Had As Men’s Tourney Enters Round of 32
• Out of Gonzaga’s Shadow, Saint Mary’s Is Worthy of Its Own March Spotlight
• K.D. Johnson’s Unending Energy Key to Auburn’s Hopes of an NCAA Tournament Run