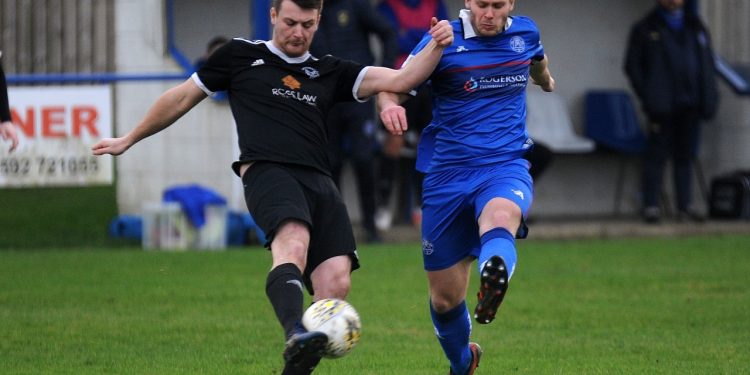 There was disappointment for Crossgates Primrose, in their derby with the ‘Bell, while Lochore Welfare took a point off conference B leaders Glenrothes.

AFTER a good run of Premier League results the Primrose have stuttered in recent weeks, as have the Bluebell, so both sides were keen to get back on the winning track in this Moorside derby.

There were not a lot of chances in the early stages, but Crossgates’ Cammy Muirhead and Scott Lawrie both threatened before the opener came for the hosts on the half hour.

A cross was nodded back across the face of goal and Stephen Husband was perfectly positioned to put the ball in the net.

Stuart Cargill was twice defied by Crossgates ‘keeper, Sean Robertson, and at the break only one goal was separating the sides.

Two minutes after the break Dundonald doubled their lead.

Husband created the opening this time with a fine pass and Lewis McKenzie fired a fine finish into the net.

Primrose tried hard to get back into the game but the Bluebell defence kept them out until a dramatic finish to the game.

With five minutes left an incident in the Bluebell box saw a penalty awarded and after the home side’s Barry Sibanda was sent off for disputing the award, Lawrie converted to set up and interesting finish.

Crossgates pushed hard for an equaliser but goalkeeper Jordan Miller kept them at bay.

The result puts Dundonald on 30 points, one behind Primrose, and delighted boss Kevin Fotheringham.

He said: “It was our best performance in a long time and it was the win we needed.

“If we can show the necessary consistency and repeat this sort of show we can get into the top six over the next few weeks.”

THE Haws produced a superb performance to give Swifts a real drubbing in this Premier League clash.

Jeanfield are having a good season but found themselves under real pressure from the first whistle at Keirs Park.

In 17 minutes space was created by Hill of Beath and Calum Adamson was brought down on the edge of the box.

Lewis Elder stepped up and made an expert job of his finish from the free-kick for the opening goal.

New signing Ross Allum was looking sharp for Haws and nine minutes from the break he doubled the lead when neat play from Daniel Watt set up Lyle Kellichan who made space for the striker to score from 18 yards.

The home side were not finished and in 40 minutes Elder was on target again from close range to make the interval score 3-0.

In 49 minutes Jeanfield got themselves back in the game with a good strike.

However, the Hill of Beath defensive frailties of the past are starting to disappear and they snuffed out any hopes of a Swifts revival.

With 20 minutes left Jake Mitchell’s effort was blocked by the keeper but he pounced on the rebound to hook the ball into the net and secure the win.

The result puts Haws on 21 points, from 20 games, and on the same total as Blackburn United and Newtongrange Star in the key 14th place in the table, and gives the Keirs Parkers an outstanding chance of staying up.

Manager Jason Dair was very pleased with the performance: “That is the best we have played since I took over and we created a lot of good chances.

“Confidence levels are rising and if we can maintain our consistency we can keep on improving our league position.

“Although this weekend we have an interesting cup-tie against Berwick Rangers at Keirs Park.”

A GOOD point off the Conference B leaders for Lochore but they’re kicking themselves for not taking all three.

The opening goal for the home side came in 10 minutes, when Lochore were down to 10 men after Sean Cusick was badly injured after a hard tackle, and Glens took advantage to hit the net when they got in behind the Welfare cover.

There were few clear chances for either side in the first period, although Glenrothes came close with a header which skimmed the Lochore bar.

The visitors started the second period well and levelled after an hour when Jamie Leslie was fouled in the home box and Robbie Crawford converted from the penalty spot, firing the ball into the top corner.

Shortly after it looked like Lochore had another spot-kick when Crawford appeared to be hauled down in the box, but the referee waved play on.

With 10 minutes left the visitors went close to a second goal when Joe Kirby’s shot slipped inches wide, but in the closing minutes Leslie picked up a second yellow and was sent off which left the Welfare to see out time added on with 10 men, but they held on.

Lochore are in fifth spot, on 32 points, but manager James Adam is eyeing third spot come May.

He said: “It was a good point for us but we really had much the better of the second-half and probably should have won it.

“However, I feel we can set our stall out to finish the season strongly with our remaining 11 games seeing us play most of the teams in the lower half of the table, and I feel we could yet finish third. That has to be the target.

ANOTHER Conference B defeat for the Berts as they played most of this game with only nine men.

Lochgelly’s Joe Meldrum picked up a second yellow inside 20 minutes and they then went a goal down when goalkeeper Gregor Brown misjudged a headed pass-back, failed to pick the ball up, and the Shippy took full advantage.

However, after that the Albert had some good possession and Burntisland were kept pretty well in check. At the break the Berts were only one down.

Four minutes into the second period Lochgelly had another man sent off with Dean Hunter receiving a second booking for conceding a penalty.

The home team tucked away the spot kick and Albert’s gallant nine defended well, with Brown making several good saves in a bid to keep the score down.

However with 12 minutes left Shipyard grabbed a third goal to wrap up the victory.

The result leaves Lochgelly in third bottom spot on 13 points and secretary Ian Patrick observed: “The sendings-off were crucial but the lads kept battling.

“We are not getting many breaks at the moment but we have to look to get as many points as we can from our closing nine games.”

How To Connect PS4 Controller To iPhone

How To Connect PS4 Controller To iPhone