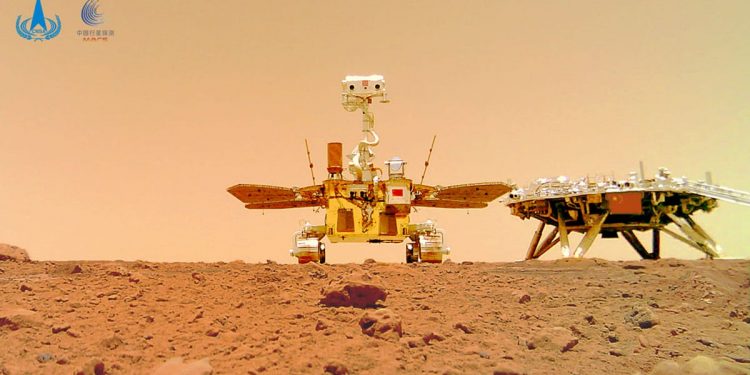 China’s Zhurong rover is currently in safe mode as it waits out a Martian dust storm, according to Chinese state-run media, and it may remain in safe mode until the end of 2022.

Zhurong landed on Mars a year ago this month; since then, the rover has recorded video and audio from a sweeping lava plain called Utopia Planitia, over 1,000 miles from NASA’s Perseverance rover.

Zhurong’s initial mission was just 90 days, but since then the rover has continued to study the Martian surface and atmosphere. The rover was also forced into a safe mode in September 2021, when a solar conjunction disrupted communications between Earth-based space agencies and all Martian spacecraft. Now, the issue is not with the motion of heavenly bodies but with local extreme weather.

It’s recently become winter in Utopia Planitia, and the conditions are harsh even without the dust storm. The China National Space Administration (CNSA) told state-run media Xinhua that daytime temperatures could go below -4 degrees Fahrenheit, and nighttime temperatures could be a cog-chilling -148 degrees Fahrenheit. The agency stated that Zhurong won’t wake up for a while—probably December, when the Martian spring returns, according to Xinhua.

Utopia Planitia’s plain, like much of Mars, is dusty, making spacecraft on its surface susceptible to the massive storms kicked up by Martian winds. Such storms can be deadly to the Martian spacecraft that rely on solar power; the storms can blot out sunlight for months.

A 2018 dust storm led to the end of NASA’s Opportunity rover mission. In January this year, the InSight lander was forced into safe mode by a similar storm; though it survived, dust coating the lander’s solar panels means the spacecraft is operating on borrowed time and probably will be decommissioned by the end of the year.

Zhurong is expected to handle the ongoing storm with relative ease, though, and its safe mode is more a precaution than a desperate measure. In the meantime, CNSA’s Tianwen-1 Mars orbiter will continue to monitor the Martian atmosphere for any changes—for better or for worse—in the Red Planet’s weather.

More: Gigantic Dust Towers on Mars Could Explain How the Red Planet Lost its Water

How To Find A Steel Stock That Is A Real Steal