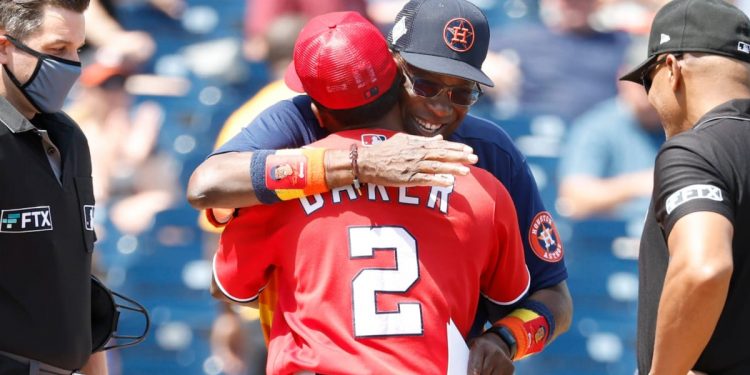 With spring training now underway, the 2022 Major League Baseball season got its first heartwarming moment during Sunday’s exhibition game between the Nationals and the Astros.

As he walked to home plate to deliver Houston’s starting lineup, Astros manager Dusty Baker was met with a familiar face. Presenting Washington’s lineup was Dusty’s son, Darren, who is currently playing in the Nationals’ farm system.

When the elder Baker realized what was happening, a huge smile broke out on his face. He and Darren shared a touching pregame embrace before getting down to business.

Dusty Baker’s connection to the Nationals goes well past his son playing for the organization. Prior to his stint with the Astros, he managed Washington during the 2016 and ’17 seasons, leading the club to back-to-back National League East titles. He posted an overall record of 192–132 during his time in the nation’s capital.

Sunday was hardly the first time that the younger Baker made a memorable appearance at home plate. During Game 5 of the 2002 World Series, three-year-old Darren became well-known for getting scooped up by Giants player J.T. Snow after he tried to complete his bat boy responsibilities during the middle of an active play. Snow, who was scoring on a Kenny Lofton triple, got Baker out of the way before a potential collision at the plate, while Dusty was in the dugout as San Francisco’s manager.

The Nationals went on to beat the Astros in Sunday’s spring training game, 3–2.