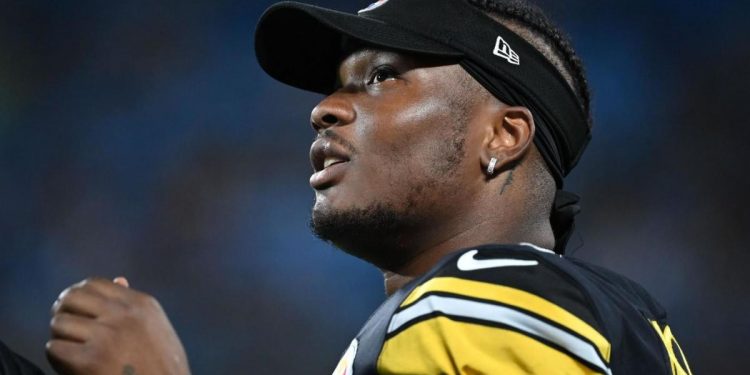 
NFL quarterback Dwayne Haskins tragically passed away early Saturday morning after being hit by a vehicle on an interstate in Florida.

The fatal accident occurred around 6:37 a.m. ET, and as news started to trickle out about what happened, it left the NFL world in shock. Dozens of players from around the league jumped on Twitter throughout the day Saturday to share their thoughts, memories, prayers and condolences for Haskins, who was just 24 years old.

Joe Burrow was one of several quarterbacks who expressed his feelings on Twitter. Burrow and Haskins were teammates at Ohio State in 2017.

Haskins beat Burrow out for the starting QB job at Ohio State heading into the 2018 season, which led to Burrow’s decision to transfer to LSU.

Russell Wilson, Patrick Mahomes, Kyler Murray and Tyrod Taylor were among the other NFL quarterbacks to pay their respects on Twitter.

Haskins was in Florida this week because he was working out with some of his Steelers’ teammates. The quarterback was heading into his second season in Pittsburgh, and his loss left his teammates heartbroken.

Steelers star T.J. Watt and quarterback Mason Rudolph were among the many Pittsburgh players who shared their feelings on Twitter.

Ben Roethlisberger, who only spent one season as Haskins’ teammate before retiring in January, released a statement following the death of his former teammate.

“I only had the privilege to know D-Hask for a short time, but in that time I got to meet a young man that didn’t seem to ever have a bad day,” Roethlisberger wrote. “He came to work everyday with a smile on his face and energy and love in his heart. I really enjoyed his passion and love for the game and wanting to learn and be the best.”

One of the more emotional reactions on Twitter came from Steelers wide receiver Chase Claypool, who had been in Florida with Haskins on Friday.

The loss of Haskins didn’t just leave his Steelers teammates devastated, but it also left many of his former Ohio State teammates speechless and heartbroken. Colts receiver Parris Campbell spent two seasons in Columbus with Haskins.

Saints star Michael Thomas shared a picture of himself with Haskins. The two were never teammates at OSU, but Thomas did play for the Buckeyes before Haskins’ arrival in Columbus.

One NFL player who knew Haskins well was 49ers receiver Mohamed Sanu. Both guys were from New Jersey, and Haskins had been best friends with Sanu’s nephew.

One person who reacted to Sanu’s tweet was Ravens quarterback Lamar Jackson.

Even players who didn’t know Haskins very well made sure to off their condolences. Jalen Ramsey, Matt Breida, Christian Kirk, Carlos Hyde and Jonnu Smith all offered prayers on Twitter.

The Vikings new coach, who was Haskins’ offensive coordinator in Washington in 2019, had this to say after he heard the tragic news.

During his brief NFL career, Haskins spent two years in Washington and one season with the Steelers. Both organizations shared their sentiments following Haskins’ death.

“I am devastated and at a loss for words with the unfortunate passing of Dwayne Haskins,” Steelers coach Mike Tomlin said.

On Washington’s end, Commanders owner Dan Snyder had a personal tie with Haskins: His son went to high school with him.

“We are devastated to hear the news of the tragic passing of Dwayne Haskins Jr.,” Dan and Tanya Snyder said in a statement. “He was a young man with a tremendous amount of potential who had an infectious personality.”

For more details on Haskins’ tragic passing, you can click here.