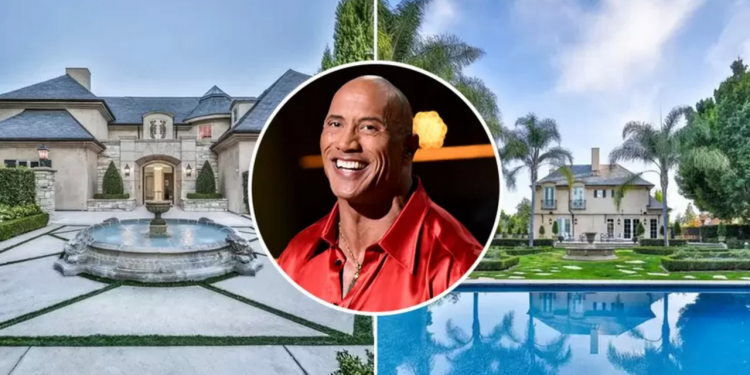 
Dwayne “The Rock” Johnson had very specific needs as a tenant: plenty of outdoor space, accommodations for a large home gym, and a plush home theater. So this luxury estate in Beverly Hills, CA, fit the bill—and then some.

But the A-lister purchased a residence in Beverly Park last year, so his former rental is back on the market—for $125,000 a month.

We must point out, he must have received his full deposit back. The place looks pristine. Let’s have a look.

In addition to a primary suite, the home features five king-size bedroom suites.

Outside, the grounds offer patios, a grassy lawn, pool, spa, and guesthouse.

The home is close to Rodeo Drive and the Beverly Hills Hotel.

The “San Andreas” actor often posted photos on social media of his antics around the mansion and grounds.

Meanwhile, the Rock is now a homeowner in nearby Beverly Park. Last year, the former wrestler and his wife, Lauren Hashian, reportedly dropped $27.8 million in an off-market deal for the smashing space from Paul Reiser.

Neighbors in the gated community include Eddie Murphy, Denzel Washington, and Adele, who reportedly picked up Sylvester Stallone’s former digs.

Johnson, 49, is one of the highest-paid actors in Hollywood. After dominating the WWE, where he was known as “The Rock,” Johnson made his mark in film. The popular performer has starred in the “Fast and Furious” and “Jumanji” movie franchises. He also produces and stars in the sitcom “Young Rock,” about his life.

This story was originally published on Realtor.com.

Sarma Melngailis and ‘Bad Vegan’: What you need to know

Sarma Melngailis and 'Bad Vegan': What you need to know