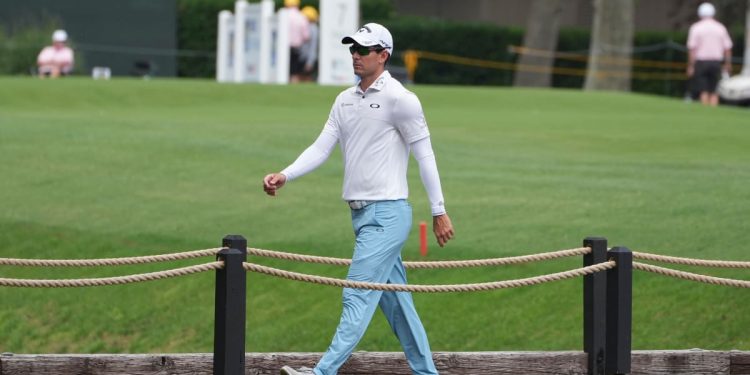 Dylan Frittelli pulled off one of the most bizarre golf shots in recent memory after he hit an errant drive into a tree at the RBC Heritage on Sunday. Unfortunately, he wasn’t rewarded for his efforts, after the PGA Tour determined that his shot was actually a violation.

The saga began after Frittelli shanked his drive at the par-4, 428-yard sixth hole at Harbour Town Golf Links. When he approached for his second shot, he found that the ball was still in mid-air, caught in the branch of a wispy tree.

The unique position led Frittelli to get creative. He grabbed his long putter, gripping  the club about halfway down the shaft, and swung overhead with a forward motion.  The ball sprung free, advancing about 30 feet and back into the fairway.

From there, Frittelli hit an iron from 144 yards out to within 10 feet of the hole. He sank the putt for what he thought at the time was “the greatest par of his life.”

But it was too good to be true.

The PGA Tour confirmed later that Frittelli had committed a violation and was “assessed a two-stroke penalty on No. 6 under Rule 10.1c.” According to the U.S. Golf Association, the rule states that a player “must not make a stroke from a stance with a foot deliberately placed on each side of, or with either foot deliberately touching, the line of play or an extension of that line behind the ball.”

Frittelli, 31, clearly disagreed with the ruling, taking to Twitter to explain the situation and make his argument for what he believed was a legal shot.

Frittelli finished with a five-over 76 on Sunday. He ended the tournament at one-over-par and tied for 66th.