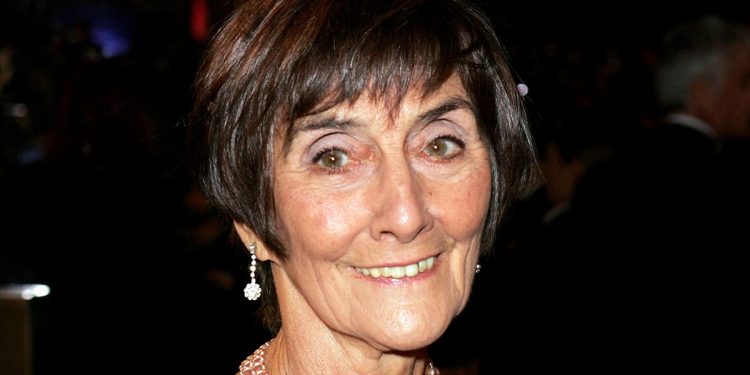 
June Brown, who played EastEnders icon Dot Cotton, passed away on 3 April, and fans of the soap have called for a lasting memorial to the veteran actress to honour her 35 years on the BBC show

June Brown: A look back at her life and EastEnders career

EastEnders fans have called for June Brown to be honoured with a statue in Albert Square, after she passed away on Sunday 3 April aged 95.

The veteran actress played soap icon Dot Cotton on the BBC show for 35 years and viewers have called on show bosses to have her immortalised with a statue at the studios where EastEnders is filmed.

Fans flocked to Twitter to share their plans for a fitting tribute to the actress, who starred in 2,884 episodes of the soap as chain-smoking busybody, and suggested it be located at Elstree Studios, Hertfordshire.

June Brown passed away on 3 April
(

The veteran actress played the iconic character for 35 years
(

“June deserves a statue. She lived through millions of cigs and Christmas deaths. What a hero,” one wrote.

“A great idea. Let’s do this, BBC,” another added.

“June brought so much joy to so many. It would be nice if they erected a statue of her,” a different fan shared.

“I think everyone should take up smoking in protest until we get a June Brown statue outside Parliament,” another viewer typed in reference to Dot’s chain-smoking.

Fans have called for a fitting tribute to the actress
(

“She was a very powerful figure in EastEnders. It would be nice Elstree Studios that they might one day erect a statue of June Brown in character as Dot, that would be another lasting memorial to her,” one fan suggested.

June played Dot Cotton from 1985 until 2020, when her 35-year run on Albert Square ended as her character left Albert Square to see her grandson Charlie in Ireland, after Sonia stole her life savings.

A spokesperson for EastEnders confirmed the veteran’s sad death in a statement, as they paid tribute to the “loving” actress.

June appeared in more than 2,800 episodes of the BBC soap
(

“There are not enough words to describe how much June was loved and adored by everyone at EastEnders, her loving warmth, wit and great humour will never be forgotten,” they said.

“June created one of the most iconic characters in Dot Cotton, not just in soap but in British television, and having appeared in 2,884 episodes, June’s remarkable performances created some of EastEnders finest moments,” the emotional statement continued.

“A very bright light has gone out at EastEnders today but we shall all be raising a sweet sherry in June’s memory.

“Rest in peace, our dearest June. You will never be forgotten,” they added.