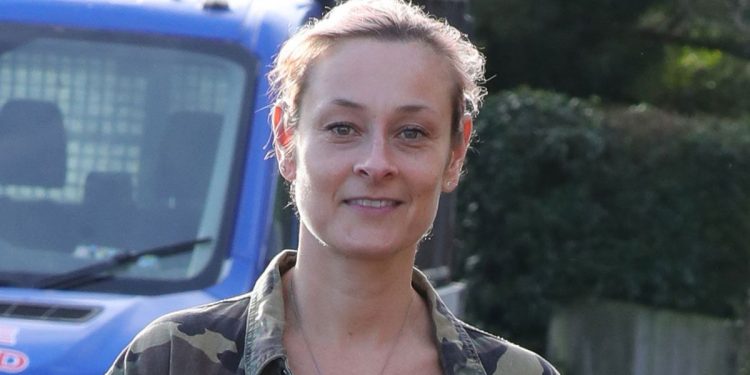 
Luisa Bradshaw-White played EastEnders character Tina Carter for eight years, but she’s turned her back on acting for a more ‘fulfilling’ career

The actress played Tina Carter in the BBC soap for eight years until her character was murdered by serial killer Gray Atkins.

Since then, the 47-year-old has set up a dance school in Hertfordshire where she hosts ‘sober raves’.

A fresh-faced Luisa was pictured outside the dance school wearing purple hippy trousers, UGG boots and an army camouflage jacket.

She gave a thumbs up to photographers as she headed inside her new business venture.

It comes as viewers are set to watch the Carter family discover her character Tina’s body in upcoming episodes a year after she went missing.

While the Carters are unaware who murdered Tina, EastEnders fans have known all along that Gray brutally killed her after she discovered he murdered his wife Chantelle.

Since then, Gray has gone on to kill Kush Kazemi, attempted to kill his children and Whitney Dean and abuse his current wife Chelsea.

In October, Tina actress Luisa revealed she had turned her back on acting after it no longer fulfilled her.

As well as her big role in EastEnders, she has also starred in Holby City, Bad Girls, Bird of a Feather, The Bill and Grange Hill.

But she says it is dance which has led her to finally find her ‘calling”.

Tina was murdered by Gray over a year ago in EastEnders
(

She now hosts Ecstatic dance classes, which she says is the perfect way to experience the excitement of going out without the hangover.

Ecstatic dance is a type of dance and aerobic exercise, where people let go and let loose to the rhythm.

She revealed she started the classes after finding comfort in the exercise a few years ago.

Speaking about her new venture to HertsLive Luisa said: “Everybody drinks the cacao [tree that produces cocoa beans] so there’s a little bit of a ceremony.

“Then people just start dancing and I DJ the music to start really, really chilled and then the beat picks up and the cacao really opens your heart.

“The cacao and the music together is such an awesome combination.”

Drinking cacao along with the unique form of dancing apparently creates a sense of euphoria.

Luisa has been married to wife Annette Yeo since 2015 and the couple share two daughters.

She told Metro: “The realisation came when I was around 19 and talking with some new friends.

“They both said they liked women and without thinking, I replied, ‘Ooh yes, me too!’. I sort of gasped as it was the first time I had even considered that I might not be straight.”

She added: “I had huge amounts of fun. While I was out to have a good time, I knew almost instantly after coming out that all I wanted was to find my true love, settle down and have a family.”