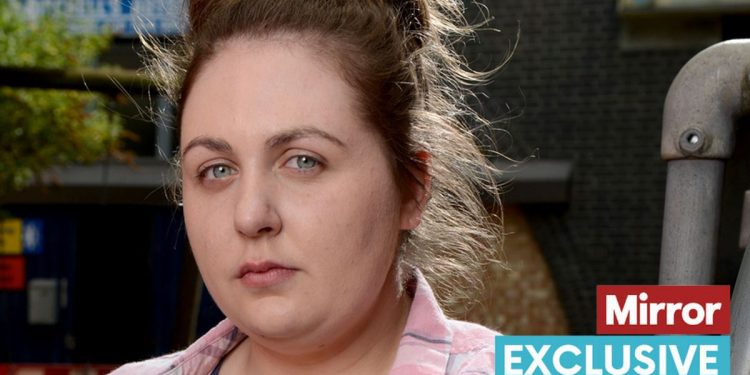 
EastEnders star Clair Norris says childhood bullies who taunted her about her weight have driven her on to acting success.

The 24-year-old who plays Bernadette Taylor in the BBC One soap opens up in a Panorama documentary about obesity.

Clair reveals she was the target of cruel taunts at primary school but it happened so often she didn’t realise it was bullying.

She says: “It all started for me in the playground with name-calling which now, as I have got older, I have come to realise is bullying.

“When it happens every day you don’t associate it with a specific word or person.

“It wasn’t for a long long time that I realised that was actual bullying and not OK and it was another pupil who told the teacher in the end what was going on.

“I think it prepared me for the industry that I am in and I feel I am bit more thick-skinned in that sense.

“It has driven me to success.”

During the documentary, to be shown on Wednesday, Clair becomes emotional as she looks back on her upbringing in Greenwich, South East London, with her supportive mum Sam.

She hopes the programme will help promote greater understanding and kindness towards the obese and overweight.

Explaining her own battle of the bulge, she says: “My weight has always fluctuated.

“I’ve lost weight I’ve gained weight. Me and my mum, we talk about it. I’ve done slimming classes but people work differently and my story isn’t for everybody.

“In the industry I’m in, there’s always going to be comments made about anything.

“You have to deal with it but even if you are slimmer you are still going to have people making comments.”

Clair took a four-month break from EastEnders to work on the Panorama programme, called Obesity: Who Cares If I’m Bigger?

The show is investigating if the Government’s strategy to tackle the UK’s obesity crisis is working 18 months after it was launched during the pandemic.

One in four UK adults are classed as obese and a further third are overweight according to official surveys.

More than a quarter of children aged 10 and 11 are obese, with 15.4% more classed as being overweight.

In the documentary, Clair meets teenagers on a weight management scheme in Sheffield and a young woman who has had a gastric
sleeve operation.

She also asks experts why some people find it difficult to lose weight and whether you can be overweight and stay healthy.

Clair was approached to take part in the documentary last November after her downtrodden EastEnders character became addicted to diet pills while acting as a surrogate mum for Rainie and Stuart Highway.

She explains: “Originally it was about looking at the help out there and different routes – whether it’s diet or weight loss surgery or injections. When I was younger there wasn’t a lot of help.

“Critics who watch the documentary will understand more and see that for some people it is not that simple.

“Not everybody that is overweight just shoves food in their mouth or is lazy.

“There are so many different avenues as to why people are overweight and if we can just accept that and understand that then I think everybody would be a lot nicer. The main thing I’ve learned is there is not a lot of mental health support to do specifically with weight so that needs to be considered.”

Following the documentary Clair has ruled out a gastric band, saying: “I never considered a gastric band because I know what works for my body.

“But I know why people would go down that route if they felt that was their only option. I have learned to accept how I am.

“I think this whole project has given me a bit more confidence in being a role model because I don’t remember having that person when I was younger.”

She adds: “Whatever route people go down, it is such a personal decision and not one-size-fits-all.

“This programme isn’t about ways you can lose weight. It is about getting to the root of the problem and not just, ‘Let’s say to stop eating and move more’.

“But ultimately what I would love from this is more understanding, for people to be kinder, and the stigma and assumptions people have about being overweight to change.”

Clair joined EastEnders as Bernie in 2017 straight from acting college in Dartford, Kent, and is well aware that being in the public eye carries responsibility.

“I am very aware I do have a following that look at me and relate to me, my face, shape, body or clothes I wear. A lot of people have said they see a lot of them in me and that’s given them confidence there is somebody out there and they don’t feel alone.”

Clair hopes this week’s documentary will show fans her real side after five years on Albert Square.

“My mum says a lot of the facial expressions I do on the show I did when I was younger and a lot of similarities,” she says.

“But I can’t wait for people to watch the documentary and see a different side to me and my childhood.”

Clair says she has had amazing support from her family, boyfriend Lewis Wood, 31, and friends including the EastEnders cast, adding: “Everyone has been so supportive, spurring me on and motivating me.

“They tell me to look at what I have achieved, look forward and keep positive.”

For now she loves being part of the soap’s popular Taylor family and hopes for more hard-hitting storylines, but would like to explore more presenting including a follow-up documentary.

“I’m really happy where I am, but would love to do another documentary as this is a tiny look into such a massive subject.”

Panorama, Obesity: Who Cares If I’m Bigger? is on BBC One on Wednesday at 8.30pm