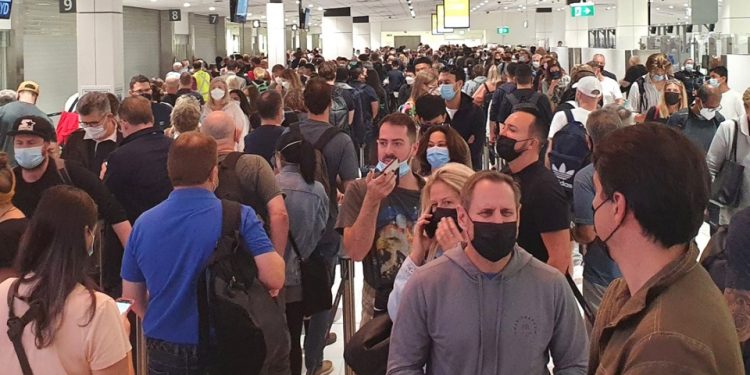 
There’s good news and bad at Australia’s airports, with passengers facing shorter check-in delays but perhaps arriving at their destinations minus their bags.

The expected rush at the country’s busiest airports has passed after fears of Easter holiday chaos but continued staff shortages meant some travellers arrived at destinations without their bags.

Sydney Airport said people had been passing through security inside 45 minutes as large queues moved smoothly on Good Friday.

Customers had been warned to arrive three hours ahead of their flights as airports around the country expected to remain busy over the break and school holiday period.

“Queues expected to ease towards midday and peak again into the afternoon,” Sydney Airport tweeted on Friday.

Over the course of the morning, social media users reported large lines but smooth processing at both Sydney and Melbourne airports.

A Qantas spokeswoman said Good Friday has been busy for the airline but travellers had heeded the message to arrive early.

Queues at check-in and security in Sydney and Melbourne had been moving fairly quickly throughout the morning.

Qantas has continued to face staffing challenges and a small number of its flights departed airports without luggage on board in recent days.

“Decisions were made to have these flights depart without baggage to ensure that customers could get to their destination and not face long flight delays or cancellations,” the spokeswoman said.

The bags will be put on later flights, and then sent to customers by courier.

“We really appreciate people’s patience and understanding and apologise for the inconvenience,” the spokeswoman said.

More than 200 head office managers have volunteered to help out as the airports face staff shortages, and Qantas said these additional measures have helped ease the pressure.

It follows days of chaos at airports around the country with staff shortages due to COVID-19 isolation rules.

For much of Thursday queues and wait times at Sydney Airport were hours long but eased later in the day.

Around 80,000 passengers are expected to depart Sydney on Friday and they are being advised to arrive two hours early for flights.

Melbourne will handle 76,000 passengers each day over the Easter period while Adelaide is anticipating 25,000 on Friday.

Monday will be Hobart’s busiest-ever day for flights, with more than 81 planes coming and going.

With the relaxing of coronavirus restrictions, Australians are set to spend $7.1 billion this holiday season, according to research conducted by Roy Morgan.

More than four million Australians are planning a trip away this Easter, with 63 per cent travelling within their own state and more than one third heading interstate.