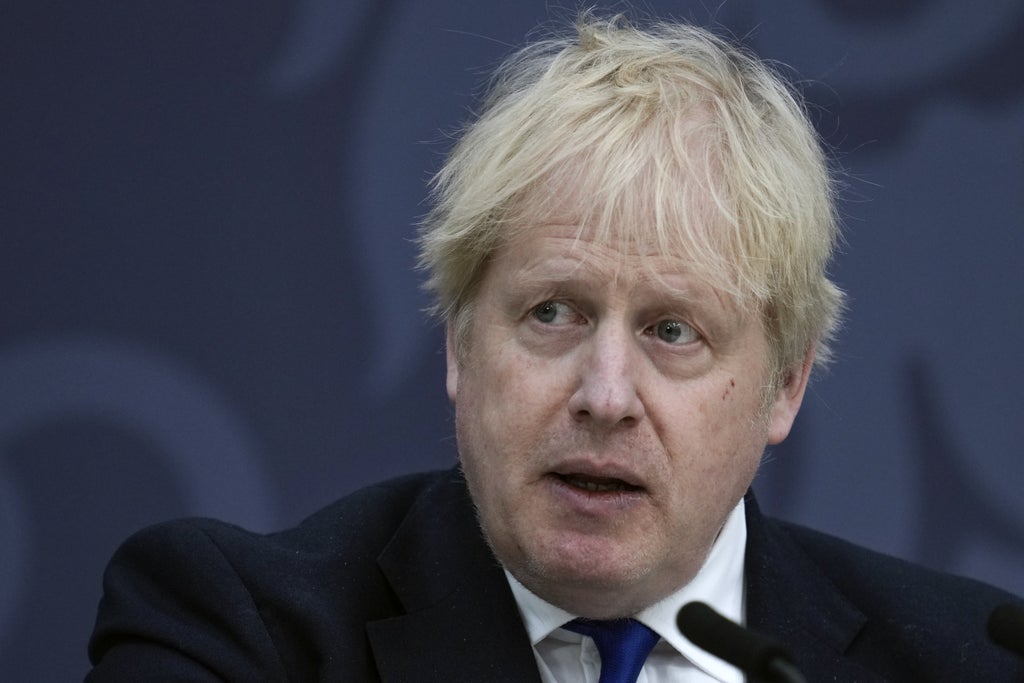 hrist’s message that good will triumph over evil will resonate even more this year amid the backdrop of the war in Ukraine, Boris Johnson has said.

Delivering his Easter message in a video on Twitter, the Prime Minister paid tribute to “the Christians of Ukraine, whether they’re marking Easter today, or its orthodox equivalent later this month, for whom Christ’s message of hope, the triumph of life over death and good over evil, will resonate this year, perhaps more than any other”.

Speaking in Ukrainian, and referencing a Psalm, he said: “Be strong and have courage in your heart, you all who trust in the Lord.”

Mr Johnson said: “Easter tells us that there is light beyond the darkness, that beyond the suffering lies redemption.”

The Archbishop of Canterbury also referenced the conflict in his Easter sermon.

Justin Welby said: “Ukrainians have woken up to the end of the world as they knew it.

“Now they are awakened by the noises of war, and the sickening reality of terror. They wake up to mortal fear.

He later added: “Let this be a time for Russian ceasefire, withdrawal and a commitment to talks.

“This is a time for resetting the ways of peace, not for what Bismarck called blood and iron. Let Christ prevail. Let the darkness of war be banished.”

It comes after Mr Johnson was among senior British politicians banned from entering Russian by the Kremlin.

The department said in a statement the move was due to the “unprecedented hostile actions of the British Government, expressed, in particular, in the imposition of sanctions against top officials” in Russia.

It added: “The Russophobic course of action of the British authorities, whose main goal is to stir up negative attitude toward our country, curtailing of bilateral ties in almost all areas, are detrimental to the wellbeing and interests of the residents of Britain. Any sanctions attack will inevitably backfire on their initiators and receive a decisive rebuff.”

A UK Government spokesperson said: “The UK and our international partners stand united in condemning the Russian government’s reprehensible actions in Ukraine and calling for the Kremlin to stop the war. We remain resolute in our support for Ukraine.”

A Downing Street spokesperson said: “The Prime Minister paid tribute to the bravery of Ukrainian forces who continue to valiantly defend their country’s freedom.

“The pair discussed the need for a long-term security solution for Ukraine, and the Prime Minister said he would continue to work closely with allies and partners to ensure Ukraine could defend its sovereignty in the weeks and months to come.

“The Prime Minister updated President Zelensky on new sanctions from the UK that came into force last week, and said the UK would continue to provide the means for Ukraine to defend itself, including armoured vehicles in the coming days.

“The Prime Minister said international support for Ukraine only grew stronger and that he remained convinced Ukraine would succeed and (Russian President Vladimir) Putin would fail.”

Meanwhile, the Ministry of Defence has said Russia’s ultimate objective remains the same despite its shifted “operational focus” to eastern Ukraine.

“It is committed to compelling Ukraine to abandon its Euro-Atlantic orientation and asserting its own regional dominance,” it said early on Sunday morning.

Government figures show around 16,400 people had arrived in the UK under Ukraine visa schemes by last Monday.

About 13,200 had arrived under the Ukraine family scheme and 3,200 under the Homes for Ukraine sponsorship scheme, provisional data shows.

Some 94,700 applications have been received for both schemes and 56,500 visas had been granted by Thursday, the Department for Levelling Up, Housing and Communities and the Home Office said.