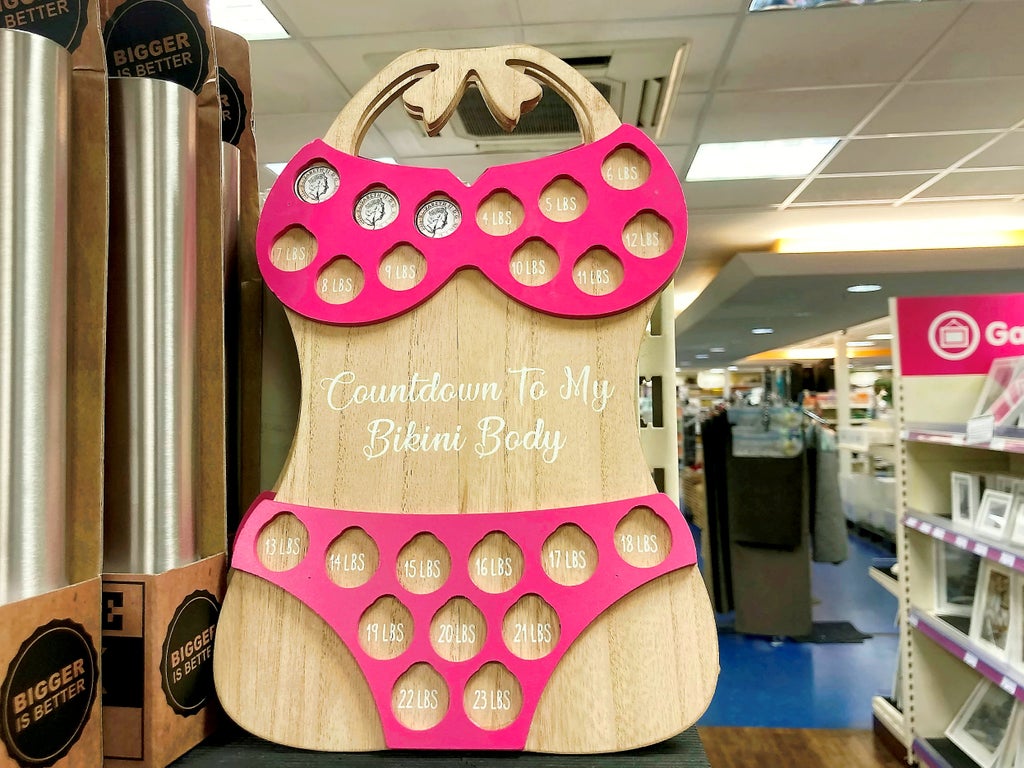 Eating disorder charities have criticised retailers for selling a “countdown calendar” that encourages women to lose 23lbs to get a “bikini body”.

The wooden calendar, which was spotted on sale by The Range and on Amazon, is in the shape of a torso wearing a pink bikini. It features 23 circular slots big enough to fit one pound coin each.

The product, which charities say “glamorises weight loss”, has been advertised as a “fun and unique way to save money and get fit”.

“Its pink bikini design will look great in any chic space, and you can treat yourself with the cash when you reach your target,” the calendar description reads.

Eating disorder charity Beat estimates that up to 1.25 million people in the UK are affected by eating disorders.

Tom Quinn, director of external affairs at the charity said idealising thinness can be “very damaging” for people who are vulnerable to eating disorders because it can serve as “inspiration for harmful eating disorder behaviours”.

“We were concerned to see that The Range is selling a calendar that glamourises weight loss,” Quinn said.

“Whilst pressure to reach body ideals like the ‘bikini body’ are unlikely to be the sole cause of an eating disorder, it can be extremely unhelpful to people in recovery.

“Pressure to reach ‘goal weights’ can also cause distress and shame around body image, or even lead to an eating disorder developing.”

In its latest survey on the mental health of children and young people in England, the NHS found that 58.2 per cent of those aged between 17 and 19 years old could be at risk of developing an eating disorder.

The “countdown calendar” has also been met with criticism on social media.

“If you have a body you already have a bikini body. This is so stupid it literally made me cringe,” one user wrote on Twitter, tagging The Range in a tweet.

Another said the calendar, which is currently still on sale on Amazon and on The Range’s website, could “easily trigger people’s body dysmorphia”.

“These aren’t the most body-positive items. Surely everybody [has] a bikini body? Why are your products relating weight to self-worth, could easily trigger people’s body dysmorphia please rethink the impact these products could have,” they said.

The Independent has contacted The Range and Amazon for comment.

For anyone struggling with the issues raised in this piece, eating disorder charity Beat’s helpline is available 365 days a year on 0808 801 0677.NCFED offers information, resources and counselling for those suffering from eating disorders, as well as their support networks. Visit eating-disorders.org.ukor call 0845 838 2040.