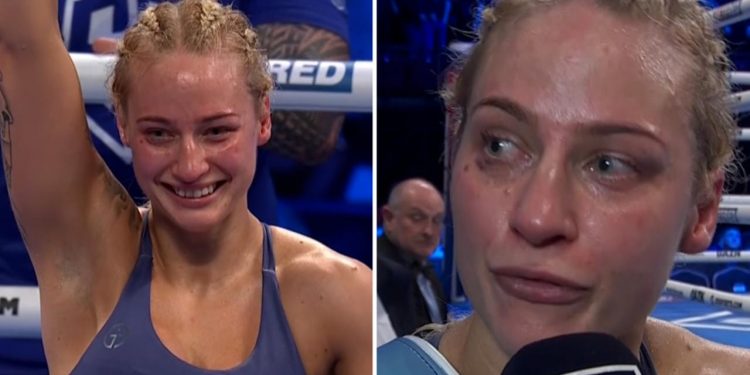 
Australia has another world champion on their hands after Ebanie Bridges secured the IBF women’s bantamweight championship via a unanimous decision over Maria Cecilia Roman.

Bridges brought an end to Roman’s five-year reign as champ as she got off to a flying start, boxing at a high pace with Roman seemingly content to absorb the shots and let Bridges tire herself out.

However, the Blonde Bomber didn’t slow down as quickly as Roman perhaps thought and hoped.

The 35-year-old did manage to show a bit of fatigue in Round 5, as she had her hands low with both women throwing big shots at one another.

The bout continued to become a more open contest as the rounds dragged on, with Roman winning the later rounds thanks to some sharp head and body shots as Bridges ensured she landed enough punches to stay competitive.

Neither could finish each other off and after 10 blockbuster rounds it went to the judges scorecards.

Ultimate Guide: EVERYTHING you need to know ahead of Tszyu v Gausha

Two judges scored the contest 97-93 with one scoring it 100-91 all in Bridges’ favour to crown a new champion.

Speaking after the fight, Bridges was ecstatic at her achievement and was reflective on just how much it meant to cap off all of the blood, sweat and tears she had poured into her boxing career.

“I feel proud of myself. Very proud,” Bridges said.

“This belt represents everything, all the heartbreak, the sacrifice, all the training, everything.

“That’s what this belt represents to me.”

Bridges then quickly turned her attention to her detractors in an expletive-laden rant.

“I can box, I can fight, and I can look hot on the scales. So hopefully I proved a lot of doubters (wrong).”