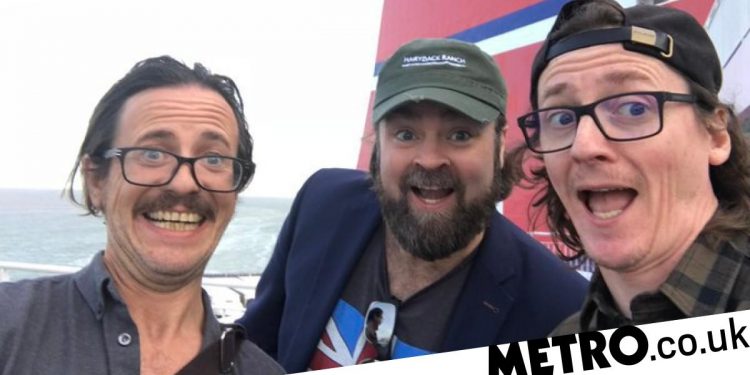 
Ed Byrne has paid tribute following the death of his brother and comedy director Paul Byrne at the age of 45, with comedians across the UK sharing their condolences.

Ed, 49, shared a photo of the pair of them on Twitter, writing: ‘Paul Byrne was a lot of things to a lot of people.

‘A talented comedy director and stand up fixer, he was loved by so many.But to me, he was my pain-in-the-a**e little brother and I will miss him so much. RIP Paul Byrne 1977-2022.’

Richard Herring responded: ‘Much love to you Ed. He was loved by a lot of people and will be greatly missed.’

Much love to you Ed. He was loved by a lot of people and will be greatly missed.

So sorry. Such a funny, clever man who always brought out the best. I loved being in his company. Sending so much love xxxx

Ed, I’m so sorry for your loss. Paul made everyone around him feel higher in their own esteem. He will be so missed x

So sorry for your loss. X

Jessica Knappett wrote: ‘So sorry. Such a funny, clever man who always brought out the best. I loved being in his company. Sending so much love xxxx’.

Maxwell, who Byrne had often worked with, shared a photo writing: ‘Rest in Peace Paul.

‘You embiggened life in so many ways. Forever you will be my perfectly cromulent friend.’

Wool added: Goodnight KiKi, If laughs were money we’d have been billionaires, Safe travels. Paul Byrne 1977-2022. RIP (it up).’

Byrne’s death was announced by his management, who shared a statement reading: ‘We are all heartbroken by the passing of our good friend and client Paul Byrne.

‘It was a privilege to have known Paul and we will cherish the time we got to spend in his company. He was an exceptional comedy director and helped craft some of the most boundary-pushing innovative and hilarious comedy shows of the last decade.

‘The support and guidance he gave comedians (and their agents) went beyond just their artwork, he helped them discover their voices.

‘He had a sparkle and talent that was utterly infectious and he will be greatly missed. Rest in peace you wonderful human.’

As well as his work as a live comedy director, Byrne was accomplished in TV and radio, working on shows including Andrew Maxwell’s One Night Stand and Chris Moyle’s Comedy Empire.


MORE : 8 Out of 10 Cats pays emotional tribute to ‘comedy legend’ Sean Lock as fans cry over one of his final episodes