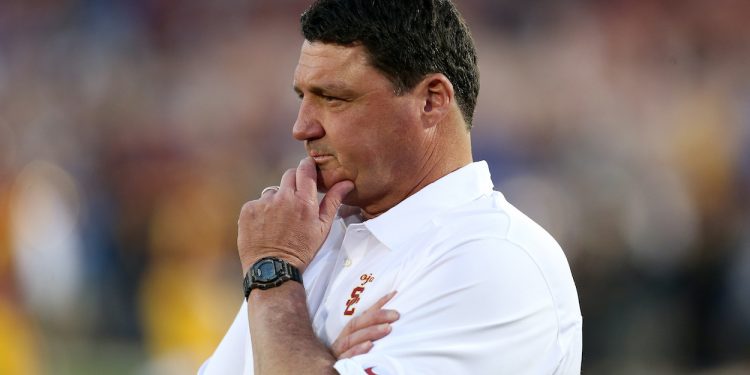 
The college football recruiting trail is a dog-eat-dog world. If a coach spends enough time trying to convince a star high schooler to join his team, he’ll do just about anything to get pen to paper in the end.

When former LSU head coach Ed Orgeron was helping Pete Carroll recruit for USC in the early 2000s, he pulled out all the stops in an effort to land star running back Adrian Peterson. In a recent interview, Orgeron detailed how he actually attempted to get Peterson’s incarcerated father transferred to Los Angeles to woo the No. 1 prospect in the country to USC.

Orgeron will always be remembered for building one of the most dominant offenses in college football history and winning a national championship at LSU, but his biggest strength as a coach has always been his tenacity on the recruiting trail. Everywhere he’s gone, elite high school recruits have followed.

When Carroll took the USC job in 2000, he kept Orgeron on board because of his ability to recruit at a high level. And even though Coach O closed the deal on most of the high schoolers he targeted at USC, he’ll always remember the one that got away.

In a recent interview on The Dan Patrick ShowOrgeron explained how he came to fall in love with Peterson as a prospect.

“Adrian and I had a great relationship,” Orgeron said. “He loved Pete Carroll, but I felt like he and I were very tight. One time, he says, ‘Coach, I want you to follow me.’ I couldn’t drive with him. We went 30 miles. I said, ‘I need to know where we’re going.’ We stopped at this little country store, and he bought a gingerbread cookie — I couldn’t buy it for him — for supper. And then we went to a basketball game, and we sat in the gym and I said, ‘What are we doing?’ He said, ‘You see that guard right there? I gotta play him next week. Coach, we’ve come to scout him.’ How ’bout that?”

Peterson was the No. 1 recruit in the country in 2004, and he was deciding between USC and Oklahoma in the end. The future Hall of Fame RB eventually decided to stay close to home and become a Sooner, which broke Orgeron’s heart.

While Peterson was deciding where to continue his football career in college, his father, Nelson, was serving a prison stint in Oklahoma for money laundering. Peterson’s father would be able to watch his games on television if he went to Oklahoma, so that was the most important factor in his college decision.

When Orgeron found out, he tried everything in his power to sway Peterson to USC. And I mean everything.

“I said, ‘Adrian, what is the key to get you here at USC?’ He says, ‘Coach, well, my dad is incarcerated and Bob Stoops went to see him,’” Orgeron explained. “Well, me and Pete Carroll tried to go get him, and to go see him. They wouldn’t let us see him. Adrian said, ‘Coach, my dad is able to watch my games where he’s at if I go to Oklahoma.’

“I tried to get the guy transferred to Los Angeles.”

Orgeron’s attempts were unsuccessful, and Peterson had no choice but to stay close to home and attend Oklahoma.

“I couldn’t get it done, but I competed,” Orgeron said.

A happy ending for both

Orgeron wasn’t able to pull off a miracle and bring Peterson to USC in 2004, but both men went on to accomplish great things in the sport.

Coach O eventually found his way to LSU and led the Tigers to a historic national championship run in 2019-20. He’s currently out of a job just two years later, but he’ll be a hot candidate whenever he decides to return to the sidelines.

As for Peterson, he went on to rush for more than 4,000 yards at Oklahoma, get drafted No. 7 overall by the Minnesota Vikings, make seven Pro Bowl appearances in the NFL, and win an MVP award in 2012. He’ll be named a Hall of Famer whenever that time comes.

It’s safe to say life worked out just fine for both men.

RELATED: Adrian Peterson and Pete Carroll Will Finally Team Up After Nearly 20 Years of Waiting

Heather Morgan is Razzlekhan, the rapper accused of laundering billions of dollars in bitcoin

Abrdn to delay shareholder vote after running out of paper

Abrdn to delay shareholder vote after running out of paper