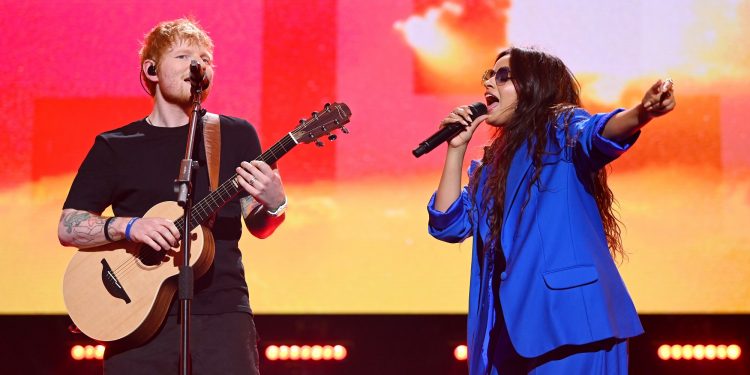 
Ed Sheeran and Camila Cabello showcased their collaboration ‘Bam Bam’ for the first time at the ‘Concert For Ukraine’ tonight (March 29).

The pair performed the track, which was produced by Ricky Reed, Edgar Barrera and Cheche Alara and written by Cabello, Sheeran and Reed, at the Resorts World Arena in Birmingham.

It is taken from her forthcoming new album ‘Familia’, which is set for release on April 8, you can view footage below.

Ahead of introducing Sheeran, Cabello paid tribute to victims of the Ukraine war.

“We’re all praying tonight for the peace and the safety of the people in the Ukraine. Thank you guys so much for being part of this important fundraiser,” she said.

“I’ve got a surprise for you guys tonight. This is me and this person’s first time singing this song together. Everybody give it up for Ed Sheeran.”

Earlier, Cabello also covered Coldplay‘s 2005 hit single ‘Fix You’, while Sheeran performed his own two song set with ‘Perfect’ and an acoustic rendition of his Number One hit ‘Bad Habits’.

Earlier this week, Ukrainian band Antytila had been told they couldn’t play the benefit concert for their country because its “only able to focus on the humanitarian situation”.

After hearing of the concert’s announcement, the members of Antytila – who are currently fighting the Russians in the Ukrainian capital Kyiv – sent a video message to Sheeran via Facebook asking to play remotely from their home country.

The ‘Bad Habits’ hitmaker responded by telling the band: “I just watched your video this morning, thank you so much for sending it. Firstly I just wanted to say to all Ukrainians, I love you, I stand with you and I’m so proud to be playing this fundraising event next week.”

After they were told they could not play, frontman Taras Topolia told NME: “It’s great that someone like Ed Sheeran can help spread the information that we are strong but that Ukraine’s refugees need help. We decided to record that video to show all of the people that we are from Kyiv, we are strong and we are unconquered. That was the main message.”

He continued: “Ed Sheeran got back to us, and that was a big pleasure for us. Our wives and children are not in Kyiv anymore. They are in western Ukraine, the United Kingdom, and the United States – so it’s very important for us to understand that the European and Western people are standing for us.”

Elsewhere in the show, there were performances from the likes of Ukraine Eurovision winner Jamala, Anne Marie, Snow Patrol, Manic Street Preachers, Gregory Porter and Nile Rodgers and Chic.

All sponsorship and advertising revenue generated from the broadcast of the event – which is expected to raise over £3million – will be donated by ITV to the DEC fund.

You can donate here to the Red Cross to help those impacted by the conflict, or via a number of other ways through Choose Love.

One Third Of Millennial Homeowners Looking To Sell This Year: Survey