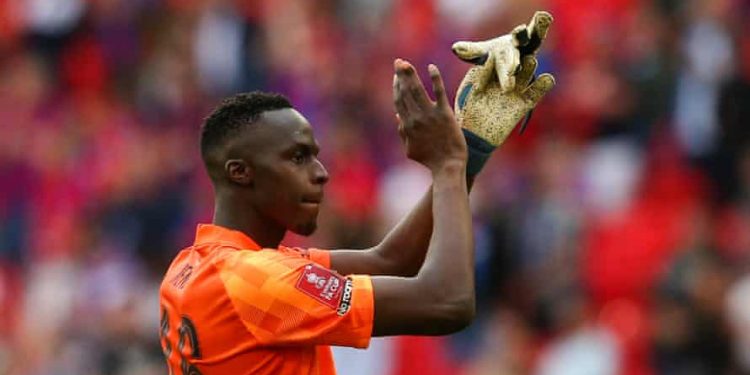 
It must be very strange to be Édouard Mendy, a goalkeeper who seems doomed never quite to be centre stage. And when the spotlight does fall on him, it often feels it’s from a strange angle, that he’s not really appreciated for what he’s best at. Goalkeepers perhaps struggle than other positions to be properly understood, but few seem as misunderstood as the Senegal international.

In a very slightly different world, one in which Gianluigi Donnarumma had not made a vastly expensive move and saved crucial penalties in shootouts in the semi-final and final of Euro 2020, Mendy would have won a raft of goalkeeping awards last year. In a very slightly different world, he would have been seen as the hero of Chelsea’s FA Cup semi-final victory over Crystal Palace on Sunday . This could have been his redemption after the error in the first leg that cost Chelsea their Champions League quarter-final against Real Madrid.

His low save to his left to keep out a Cheikhou Kouyaté volley nine minutes before half-time was stunning, but the impact was perhaps lost because Joachim Andersen’s follow-up, which cannoned back off a post, was immediately ruled offside. Kouyaté’s effort would have counted, but the dramatic impact of Mendy’s intervention was lost as the flag was raised. (Of course had Andersen scored, there would have been plenty lining up to say Mendy, even at full stretch, responding sharply to a snap-shot through a crowded box, should somehow have pushed the ball away from oncoming opponents.)

You can make almost any case with hypotheticals, but imagine that save had come late in the game, when the score was still 1-0. Perhaps Mendy’s save would not quite have gone down as one of the great FA Cup saves, a stop to rival Jim Montgomery from Peter Lorimer in 1973, David Seaman from Paul Peschisolido in 2003 or Kasper Schmeichel from Ben Chilwell last year, but he would have been hailed as a key figure. As it is, his save just joined the mulch of a largely indifferent first half.

There were long spells before half-time of boilerplate superclub against mid-table football: the former probed too slowly to look really threatening, and the latter resisted, offering the occasional glimmer of a threat in the counter or from set-plays. After the drama of Saturday’s semi-final, it felt at times slightly anticlimactic, not helped by the curious lack of conspicuous enthusiasm from the Chelsea fans as they squinted into the late-afternoon sunshine.

While Palace’s fans, for whom such occasions remain a novelty, sang and clapped and bounced and waved their flags and balloons in a blur of red and blue, the sense of weary familiarity at the other end was almost palpable: all that fuss about sanctions preventing the sale of tickets and the club didn’t even sell out their allocation.

This, of course, is one of the many blights of the superclub era that was ushered in by Roman Abramovich’s takeover in 2003. That what should be events, days that previous generations would have recalled for a lifetime, become dully quotidian to the extent that Chelsea will face Liverpool in both domestic cup finals this season. That the new owners, whoever they may be, might not pump in £1.5bn as Abramovich did, that these days may not be so frequent in future, seems not yet entirely to have sunk in.

Wembley has simply become part of Chelsea’s routine to the extent that they have become part of the pattern of Mendy not quite gaining appropriate recognition. Last time they were here, for the League Cup final seven weeks ago, Mendy made a series of fine saves and was probably Chelsea’s man of the match, only for his part in the narrative to be as a supporting actor to another Kepa Arrizabalaga penalty shootout drama (even when he was signed, for a paltry £22m from Rennes, it felt it was largely to be not-Kepa).

As Arrizabalaga, who came on for Mendy at the end of extra time, let in 11 out of 11 Liverpool penalties and skied his own kick, the standard line to take seemed to be that taking off Mendy had been a desperate mistake.

Perhaps Chelsea would have won had Mendy stayed on, perhaps his excellence during the game would have had a psychological impact. But the logic that he had just won a penalty shootout with Senegal in the Africa Cup of Nations final seemed flawed. Egypt’s two failures from the spot then were an effort blazed miles over and another scuffed into Mendy’s body. It’s possible Mohamed Abdelmonem and Mohanad Lasheen quailed before Mendy’s presence, but his penalty record suggests few had been so overawed before. Mendy has many qualities as a goalkeeper, but saving penalties is not high on the list.

Nevertheless, he has since won another penalty shootout against Egypt, in a World Cup qualifying playoff. That drama, though, will be remembered, if it is remembered at all beyond the two countries involved, for Senegal fans’ industrial use of laser pens shone in the eyes of Mohamed Salah and others before Sadio Mané smashed home the winner.

Yet were next month’s FA Cup final against Liverpool to go to a shootout, it seems very unlikely Mendy would again be removed for Arrizabalaga, even though that was a switch that worked in the Uefa Super Cup success against Villarreal.

And it may be that the FA Cup final provides his moment. If any Chelsea player is due proper recognition before the uncertainty that follows the Abramovich era takes over, it is Mendy.