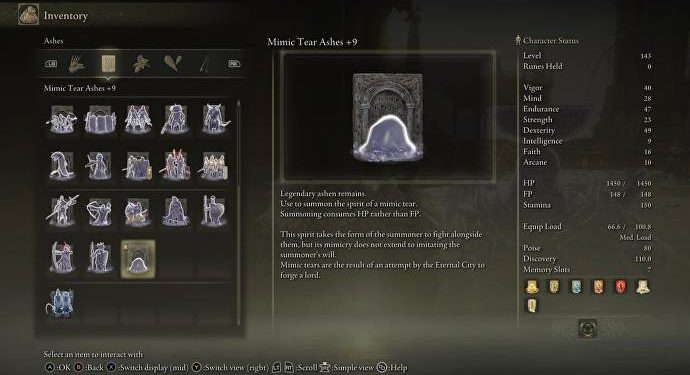 
Elden Ring players woke up this morning to a cruel surprise. Developer FromSoftware released a major new patch for the game – its biggest since launch – that brings a list of nerfs and buffs. Unfortunately, as it’s often the case with balance updates, some of players’ favourite items have been nullified.

Patch 1.03 went live earlier this morning on all platforms; introducing a number of incredibly helpful new features, expanding the quests of some NPCs, and fixing several bugs – particularly those involving performance hiccups while traversing the open world.

Though all players are excited that the map now lists discovered merchants, and the locations of NPCs you’ve encountered, some are lamenting a few of the nerfs that hit their favourite skills and summons. Nowhere is this more true than with the Mimic Tear.

The Mimic Tear is a unique Spirit Ash summon found in one of Elden Ring’s many secret areas (the Eternal Ciy of Nokron). The point of the summon is simple, which is what made it so dangerous. When summoned, the tear mimics the player – their movement, weapon loadout, armour, and combat tendencies.

In other words, it’s like having two of you on the field, which often meant dealing nearly double the damage to bosses. Players pretty quickly realised that you can also alter your own loadout just before summoning the Mimic Tear to essentially have two different play styles of your own fighting the boss. It was common to equip an overpowered weapon before summoning, and switching back to your standard loadout after it’s been summoned.

Over on Elden Ring’s big subreddit, the memes have begun, as more and more players wake up to the news and post their reactions in what’s become one of the most popular threads on the subreddit.

Sadly for GhostSlayer781, spending those Runes and Gloveworts to upgrade the Mimic Tear may have been a bit of an unfortunate waste.

“I legit just got that man to 10+ too 💀 I guess it’s okay that I managed to kill double tree sentinel while I still had him,” they wrote.

As to what the nerf actually did, Reddit user Eurehetemec did some testing and found that while the Mimic Tear summon will still tank a few hits, it just won’t deal anywhere near as much damage as before. That said, Eurehetemec suggests that the summon is now more aggressive, and might even be more effective – depending on the situation.

Even if you didn’t apprectiate the destructive potential of the Mimic Tear, it was still an easy summon to recommend because of how versatile it was. In our boss tactics for Morgott, Rykard, Maliketh and others, we always suggest summoning a Spirit Ash to aid you. The Mimic Tear was simply too good to ignore.

Better catch up on the rest of our recommendations in our popular Elden Ring guide before they nerf the rest of those tactics/summons/spells/weapons. We’re just glad they left poor old Noble Sorcerer alone.

Formula One 2022: a team-by-team guide to the cars and drivers | Formula One