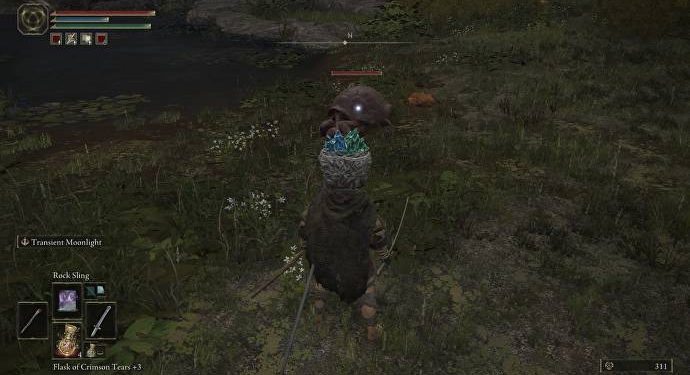 
Turtles are everywhere in Elden Ring. From the first time you encounter a player message telling you there’s a “dog ahead” only to find a shelled creature wandering aimlessly, to the multitude of turtle-themed items you can find, it’s clear that someone in the FromSoftware team has a soft spot for these sweet, docile reptiles.

And why shouldn’t they? Turtles (and indeed other adjacent creatures in the ‘testudine’ family, all of which Elden Ring describes as turtles) are universally beloved for a reason. In Elden Ring, that same admiration is readily apparent in a variety of small and large ways: in an abundance of the game’s lore text, in the sheer prominence of the creatures in the open world, and even in the community’s response to them.

In a game like Elden Ring that deals less in rigid plot and more in world building by throwing players into a vast, dark, fantasy universe, it can be easy to dismiss the most familiar of the details when there’s already so many overwhelming elements. In the same way that you wouldn’t prioritize asking why there are knights or claymore swords in this world where giant pots with arms and sentient fingers run amok, asking why turtles? feels like too small of a question.

Turtles have long been used in storytelling as symbols. The slow pace and resilient nature of the turtle can be used to draw attention to all manner of things – though, most commonly, you’ll see them used to denote stability, perseverance, and peace.

You may be familiar with Aesop’s Tortoise And The Hare fable, which positions the tortoise as a creature that succeeds due to its resilience and humble attitude (as opposed to the over-confident bombast of the Hare). Elden Ring isn’t exactly delivering a moral message in the same way, but the turtles of The Lands Between certainly point to some interesting thematic threads that the game itself seems to want you to recognise.

FromSoftware is clearly no stranger to incorporating visual symbolism with varying degrees of subtlety (think back to all that cosmic horror in Bloodborne). In the case of Elden Ring, the turtles aren’t just visual metaphors for their most virtuous traits. No, instead they often represent a wisdom that lies just out of reach: a peace and tranquility that is now unobtainable due to the circumstances of Elden Ring’s ‘shattered’ world.

The infamous ‘Turtle Pope’ (once again, he actually more closely resembles a tortoise, but I don’t think we’re ready for that conversation) Miriel tells us a lot about this idea: it is a giant, friendly creature who resides in the Church of Vows, and an NPC that the internet wants to protect at all costs after a player described killing him just to see what happens.

We live in an indisputably cruel world where such things can occur, and Miriel reminds us of this himself, gesturing towards how the world was before the shattering, where diplomacy and peace were supposedly valued and respected skills.

Miriel’s ‘Church of Vows’ has a pretty clear and singular goal: serving as a monument to the previously united, but now disparate, factions of The Lands Between, and restoring faith in the idea that people can communicate to solve their issues.

“Heresy is not native to this world,” he says. “It is but a contrivance – all things can be conjoined.” This is obviously a kind-hearted sentiment, but also one powered by a blinding optimism hard to find elsewhere in Elden Ring. In between delivering such wisdom, Miriel naps, their head heavy. It’s clear just from this Miriel has seen a lot, if it weren’t already obvious from the history lessons the NPC so happily gives you.

Of course, Miriel is one of many turtles that you can miss entirely (or selectively choose to not engage with, if that’s more your play style). What seems to be an important cause from a wise creature seems to matter very little to everyone else in this land of blood and death.

Elsewhere in The Lands Between, turtles themselves are neglected: hunted to near extinction for the healing effects of their meat. If you come across a turtle, you can finish it in one shot to have some white meat and turtle neck ready to transform into useful healing items. The pickled turtle neck item you can craft is one of the best restorative items in the game, and is described as “practically boiling out endless power”.

The innate healing properties of the turtles – and the way that makes them high-value targets for others seeking this magic – is a strong message from the developer, who highlights the futility of Miriel’s desire for peace in this world: the turtles can heal the Tarnished, but only if they are slain. A hollow contradiction. The turtles aren’t just a symbol for peace in Elden Ring: they’re a demonstration that peace is uniquely unobtainable in Elden Ring’s ‘shattered’ world.

This idea of Turtles as a symbol of ‘lost peace’ is continually reinforced by everything in the game that has ‘turtle’ imagery: the description of the turtle talisman, an item that aids stamina recovery, tells us that the turtle is “symbolic of inexhaustible power”, but also provides the key detail that “those who hold turtles to be wise creatures consider the practice of eating their meat to be barbarous.”

Clearly, someone else considers it strange to kill these magically powerful and observably wise creatures for short term gain. But given that we never really find out who pens the item descriptions in Elden Ring, it’s unclear who is making these observations and judgements.

Judging by the player messages and the community reaction to Miriel, there’s at least some respect for the turtles shining through in the playerbase of Elden Ring. Even the silly mislabeling has an undeniably affectionate undertone.

But, even despite finding fans here in our world, the turtle suffering in The Lands Between will continue – at least, possibly, until you restore the great runes and become the Elden Lord.

So, if you ever needed another reason to finish Elden Ring, now you have one: do it for the turtles.

The Fight Of Erik Skoglund’s Life