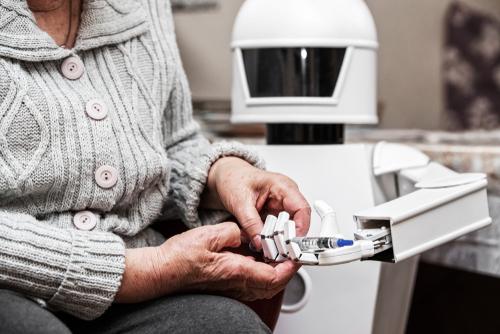 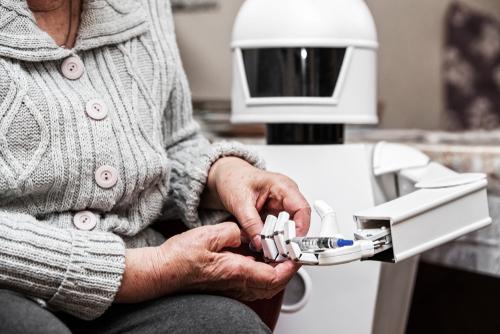 Robots have come a long way. For years they have been supporting human activity – enabling exploration in dangerous and unreachable environments like out in space and deep in the oceans. A new generation of robots are being designed to stay closer to home – caring for ageing adults and young children.

In the not-too-distant future, elderly people who live alone may be reminded to take their medicine, have books read to them, and be offered a metaphorical, shoulder to cry on – by a robot.

As Europe’s ageing population places increasing strain on healthcare services – with the share of older people in the total population expected to increase significantly in the coming decades – robots could provide a useful solution.

Several robots are being developed as companions to help the aged live independently for longer.

‘Robotics are essential for the health sector and for older adults because in 20 to 30 years’ time there’s not going to be enough people to take care of the ageing population,’ said Estibaliz Arzoz-Fernandez, project manager and deputy coordinator of a joint EU-Japan project called ACCRA.

One robot being designed to help with independent living is BUDDY. It is the height of a medium-sized dog, has an expressive face and can move and speak.

Researchers in ACCRA brought together elderly people and their carers to help design this and another robot.

‘The elderly really felt they had a presence and didn’t feel alone,’ said Arzoz-Fernandez. ‘We think that this robot will improve their wellbeing.’

BUDDY can give reminders of appointments, read e-books out loud, offer cognitive stimulation like math puzzles, set up video calls with friends and family, switch on and off appliances, and patrol the home for security.

These features could help people with early signs of dependency live independently for longer, said Arzoz-Fernandez, who is also lead project manager at Trialog, a Paris-based company that advises companies and public sector institutions about new innovations.

The participants said the two most important aspects of BUDDY were its emotional and cognitive interactions. This is what the developers will focus on improving, noted Arzoz-Fernandez.

For example, people loved that BUDDY expressed pleasure when they caressed the robot’s ‘head’, and irritation if they stared it in the ‘eye’ for a long time.

Another robot the ACCRA project worked on was Astro. This is a tall, moving robot designed to help people recover from operations and improve their mobility. People can lean on it to walk, and it can guide them through exercises prescribed by health professionals.

Carers and the elderly participants in the project said the robot needed to move more smoothly and allow people to respond to its questions verbally.

This kind of co-creation ‘is essential’ to develop a robot shaped to the needs and expectations of the users, said Arzoz-Fernandez. Design engineers may think they know what end users want but ‘that’s often not the case’, she said.

The researchers found managing the expectations of potential users is also important if the robots are to be successful. ‘Elderly users are expecting activities and conversation that humans provide – and technology is not at this stage yet,’ said Arzoz-Fernandez.

Developing robots that can learn about the human and hold conversations with real awareness of their interests will take a long time and could be too costly, she explained.

Check out Pepper and Cozmo

A lot of time and money goes into making social robots look and act as human as possible – but research shows they do not need these expensive attributes to be appealing to humans, said Emily Cross, professor of social robotics at the University of Glasgow.

“There’s this intensive arms race to make robots look and act ever more human-like or social, or super engaging,” she says.

‘Really understanding the human side of human-robot interaction … will allow us to accelerate the progress we make in terms of (developing) robots that are actually effective.’

In one study, the researchers compared people’s responses to a human-looking robot called Pepper, and a palm-sized children’s toy robot called Cozmo.

Pepper can hold a conversation and move. Cozmo cannot speak but it has expressive eyes and makes sounds to express emotions.

The research team found that Cozmo engaged brain regions and cognitive processes in ways that are ‘much more richly involved’ than when people interacted with Pepper.

‘The amount of money and R&D that’s gone into this very human-like robot is orders of magnitude larger than for this little forklift … kids’ toy robot,’ said Prof. Cross.

‘But Cozmo can have much more of an impact on social cognition in children and adults,’ she said. ‘That’s super surprising in some ways, and not really on the radar.’

The Social Robots project made another surprising discovery: how someone is first introduced to the robot has as much impact as what the robot looks like and what it can do.

If someone is told the robot is quite slow, or needs people to speak slowly, it manages their expectations and they can adapt their behaviour to gain more from the experience – by speaking more slowly, for example.

Understanding these human-robot dynamics is vital. ‘The future of humanity’s prosperity, comfort, ease and joy of life is at stake,’ says Prof. Cross.

And countries with ageing populations need effective and affordable ‘social robots’ on the market as soon as possible, the researchers say.

The good news is that within the next decade – maybe less – robots that extend older people’s ability to live independently could be available for purchase, said Arzoz-Fernandez.

‘That will be good for the elderly, their carers, and the health system,’ she said.

The research in this article was funded by the EU. If you liked this article, please consider sharing it on social media.

Could swallowing or inhaling ‘good’ viruses be the new way to beat infections?