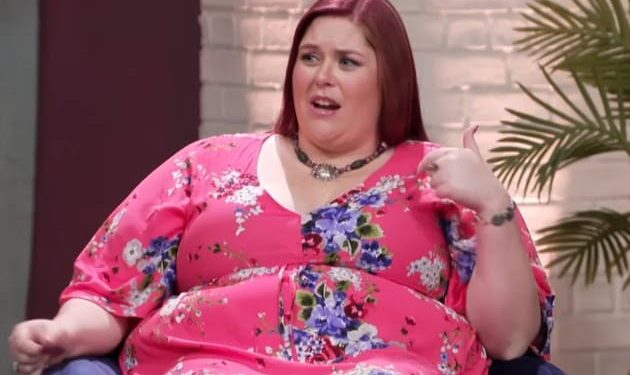 Even during Season 5 of 90 Day Fiance: Before The 90 Days, Ella got flack from fans.


During one painful moment, she confessed to Johnny that she had slept with a friend.


Ella was in tears, Johnny was hurt, and fans were fuming at Ella and calling her out.


At the Tell All, it was Ella’s castmates’ turn to excoriate her. Some also had some, ahem, advice.


Through this sneak peek clip for Part 2 of the Tell All special, we see Ella Johnson speak up for herself.


“I need it to be known,” she shared, that “my love language is touch.”


“And,” Ella pointed out, “two years is a really long time to have to wait.”


Ella isn’t wrong, and we should all keep in mind that Ella and Johnny didn’t set out to be apart for this long.


If it weren’t for the COVID-19 pandemic, Johnny would either have already come to see her in Idaho … or possibly would have found other excuses.


(We’re not accusing Johnny of anything, but after all of these delays, everyone has to consider the possibilities)


However, Ella is not the only one on stage who was in a long-distance relationship (since they all were).


“Then you shouldn’t be in a long-distance relationship if you’re that vulnerable,” Memphis explains.


“And,” she suggests, “don’t put yourself in that situation.”


“Me and [Hamza], you know, we have been away from each other for a long time, just like you,” Memphis notes.


“You have to do little things like the sexy time stuff to try to like keep that going,” she advises.


Memphis says that it’s important to keep the romance alive “because temptation is a you-know-what.”


Ella explains that there was more going on than just a moment of “temptation,” however.


“You know, for me, I didn’t think that he would come,” she admitted.


“And like yeah, I know I f–ked up, I f–king owned it,” Ella noted, referring to her honest confession.


“Did I not f–king own it?” she asked, getting understandably defensive, affirming: “I owned it.”


Though her honesty is certainly a step up above some of her castmates, nobody was lining up to give Ella a medal, either.


“But let me tell you something, okay?” she said. “If you’re in an international relationship, you don’t cheat.”


We are desperately curious to hear why Kimberly specified the “international” part, but she wasn’t done.


“I have zero respect for you for that,” Kimberly stated. She has had a beef with Ella since she arrived.


“And you can sit up here and say you have excuses all day,” she went on.


Kimberly continued: “You hurt that man and when I saw that on camera it broke my heart.”


She recalled: “The first time I met Gino was after nine months.”


“And,” Jasmine characterized, “I was dying every single day to have sex with him.”


“If you’re, like, touch is so important to you,” Jasmine asked, “why are you gonna be in a long-distance relationship?”


“Hey,” Jasmine suggested, “there’s so many other things that Memphis mentioned.”


Jasmine had some advice of her own: “Touch yourself. Use plastic.”


“Buy a toy!” Usman Umar then chimed in, recommending the purchase of sex toys. “Buy toys!”