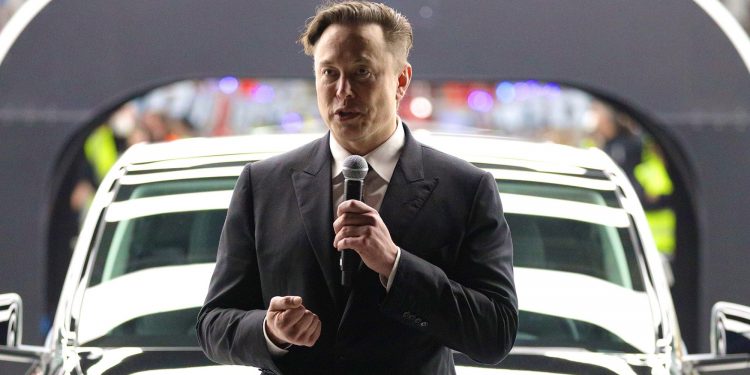 
Tesla CEO Elon Musk is known to stir the pot on Twitter, usually with contentious takes or short sentences that get people reeling.

For better or for worse, the billionaire knows how to cause a commotion on social media, and his latest viral antic certainly has people talking.

A video has made its rounds on the internet of Musk getting groovy at the Tesla gigafactory opening in Berlin, the company’s first manufacturing facility in Europe.

The $5.5 million dollar plant is expected to “manufacture hundreds of thousands of Model Y vehicles and millions of battery cells” and officially opened to 30 clients on March 22.

Related: What Is Elon Musk’s Favorite Color? The Answer Is Unsurprisingly Complicated.

In the video, Musk can be seen awkwardly pumping out some dance moves around a vehicle as the crowd claps him on over some loud dance music.

Safe to say the billionaire didn’t exactly get the gift of rhythm but hey, we can’t all have everything.

As it tends to do, Twitter absolutely lost its mind over the clip, many commending Musk on a job well done and being happy for the CEO for feeling so joyous about his accomplishments.

He’s excited like a child. I wish more CEOs were so joyous about their work and company.

Elon is Elon, no other billionaires can beat him in engagement with ordinary folks

that it is awkward and terrible is what makes it endearing.

Dad dance of the year!

Protect this man at all costs

Musk also made a stir this week when he revealed that Tesla vehicles would soon become available in new colors instead of the standard black, grey, white, blue and red, thanks to technology at the new gigafactory in Berlin.

“Giga Berlin will have world’s most advanced paint shop, with more layers of stunning colors that subtly change with curvature,” Musk said in the past.

Tesla was up a whopping 57% year over year as of Friday afternoon.

Rumour – Skate 4 Could Be Shown Off Soon