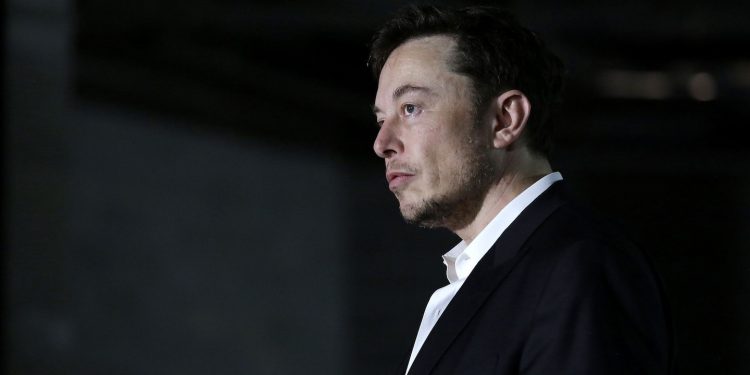 SAN FRANCISCO — Elon Musk tweeted early Friday that his $44 billion bid to buy Twitter was temporarily on hold as he examined the number of spam accounts on the site, sending the company’s stock down sharply.

“Twitter deal temporarily on hold pending details supporting calculation that spam/accounts do indeed represent less than 5% of users,” he tweeted, linking to a Reuters article from last week citing a Twitter filing.

It was not immediately clear how the Tesla CEO would pause the deal or how serious the threat was. Musk is prone to brash statements on Twitter, something that has drawn scrutiny by the Securities and Exchange Commission. The terms of the deal require a $1 billion breakup fee.

Before the tweet, Musk already was seeking additional investors for the purchase as a market downturn puts pressure on his financing.

Tesla has lost $400 billion in market value since Musk’s interest in Twitter became public in early April, driving a wedge in his acquisition plans at a time when he has committed $21 billion of his wealth to finance the purchase. Musk had planned to buy Twitter with a combination of loans and equity commitments, leveraging into the deal much of his stake in the world’s most valuable automaker — from which he derives most of his wealth.

Musk’s net worth, which makes him the world’s richest man, has fallen by around $50 billion in recent weeks, according to Forbes’ real-time wealth index. And Tesla stock has shed nearly 30 percent of its value in just the past month.

Now, Musk has been seeking out additional investments beyond what he had initially planned, because of the economic downturn and the weakening of Tesla’s stock price, according to people familiar with the negotiations who spoke on the condition of anonymity, citing the sensitivity of the discussions.

In part because of the downturn, Musk and the bankers involved in the deal have been under pressure to solidify partners. Among them: Yahoo owner Apollo Global Management, which is expected to extend more than $1 billion of financing with a group of partners, according to one of the people.

And CNBC reported on Thursday that start-up investor Jason Calacanis was lining up investors to participate in Musk’s ownership bid. Prospective investors who have spoken with The Washington Post said interest in Musk’s bid remains high because of the belief he would make good on his investment, despite his declaration that the economics of Twitter are not his concern.

Twitter shares fell roughly 20 percent in premarket trading after the tweet but cut their losses; they were down 9.5 percent shortly after the opening bell. Tesla shares opened 6.2 percent higher before trailing off. Investors in the electric-car company, led by Musk have been concerned about the billionaire’s leveraging his stake to fund the Twitter deal.

It wouldn’t be the first time Musk has tweeted something that moves the markets; sometimes the practice gets him in trouble. Most famously, he tweeted in 2018 that he had secured funding to take Tesla private at $420 a share. The SEC fined him $20 million. He has also tweeted that Tesla is overvalued, and tweeted a poll asking the public whether he should sell a part of his Tesla stake.

There were no new SEC filings regarding the deal Friday morning, the normal course of action for major changes, analysts said.

“To do this in a tweet and not in a filing is unconscionable, and it sends the market into a circus show,” said Wedbush Securities analyst Dan Ives.

The problem of Twitter bots also isn’t new to Musk. He has cited ridding the social media site of spam bots, or automated accounts that often promote products or schemes, as one of his main focuses for improving Twitter.

“If our twitter bid succeeds, we will defeat the spam bots or die trying!” he tweeted last month. In a broadcast interview this week, he reiterated that the company needs to crack down on the bots and build trust with users.

Some experts said that it could be a tactic to renegotiate the price of the deal.

“I can only say that in merger terms, it’s a fairly slender reed for canceling a deal,” said Ann Lipton, an associate professor of law at Tulane University. “Sometimes this kind of thing is used as a basis for renegotiating a deal price, but again, unless the problem is having far more impact on Twitter financially than has been reported, it’s not strong ground for that, either.”

Lipton said that issues including user accounts usually would have been checked out before the sides agreed to a deal.

The terms of Musk’s deal to acquire Twitter allow him to tweet about his acquisition “so long as such tweets do not disparage the Company or any of its Representatives.”

The deal has already significantly roiled Twitter internally since it was announced last month. CEO Parag Agrawal announced the departure of two top executives this week, and many employees have expressed concern about what ownership by Musk could mean for the company.

Some employees are especially wary of Musk’s calls to promote “free speech” on the site, a stance they worry could lead to the rollback of safety policies the company has put in place to protect users online.

In recent days, Musk has cautioned that he is not yet the owner of Twitter, although he has laid clear plans for the social media service — such as restoring the account of former president Donald Trump, who was banned after the Jan. 6, 2021, attack on the U.S. Capitol.

“If Twitter acquisition completes, company will be super focused on hardcore software engineering, design, [information security] & server hardware,” he wrote in a tweet last week, adding: “Also, work ethic expectations would be extreme, but much less than I demand of myself.”

He said at a summit with the Financial Times on Tuesday that the ban on Trump “was a morally bad decision, to be clear, and foolish in the extreme.”

The deal also could be affected by outside factors, such as regulatory scrutiny from the Federal Trade Commission or the SEC. The Wall Street Journal reported Wednesday that the SEC was investigating Musk for late notification that he had purchased a 5 percent stake in Twitter.

Musk has leveraged much of his Tesla stock as collateral for his loans, making the recent economic downturn a particular issue for his bid. Tesla has warned of the risks it faces because of the amount of Tesla stock Musk has committed as collateral. Tesla’s stock was trading at under $730 on Thursday, well below the more than $1,100 mark from early April. A drop by several hundred more dollars could trigger requirements that would force Musk to sell some shares, analysts said.

At one point last year, he had committed more than half of his shares as collateral, according to financial filings. Because the Twitter bid would only increase that exposure, Musk has faced pressure to reduce his equity commitment, according to people with knowledge of the matter who spoke on the condition of anonymity to discuss sensitive matters.

Elon Musk is worth $270 billion. He’d buy Twitter with an IOU.

In its annual filing, Tesla was open about the potential risk.

“If Elon Musk were forced to sell shares of our common stock that he has pledged to secure certain personal loan obligations, such sales could cause our stock price to decline,” according to the document.

“We are not a party to these loans,” the company wrote. If its stock price declined, Tesla wrote, Musk could be forced by banks to sell Tesla shares to meet his loan obligations.

That could further depress the stock.

“It becomes a spiral,” Ives said.