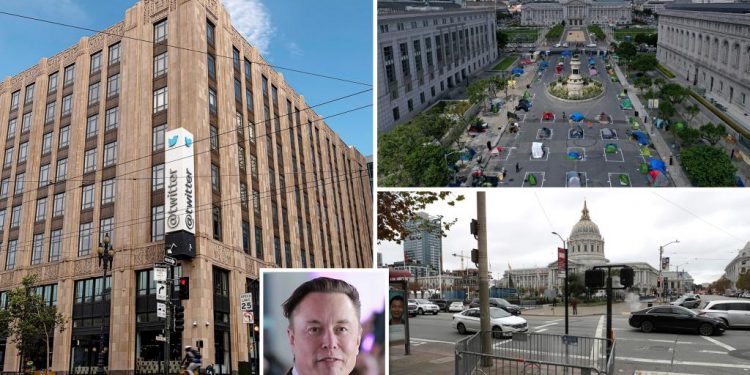 
Elon Musk tweeted that San Francisco’s homeless should move into Twitter’s headquarters in the heart of downtown, noting that the company’s staff are primarily working remote.

Musk, the world’s richest man, posted the tweet just days after it was learned that he bought up a 9% stake in Twitter.

He tweeted a poll to his tens of millions of Twitter followers. The poll read: “Convert Twitter SF HQ to homeless shelter since no one show up anyway[?]”

More than 1.5 million people responded to the poll, with 91% casting a “yes” vote. The poll was later deleted.

Musk later insisted: “I’m serious about this one btw.”

The Amazon founder tweeted an article by technology-focused blog GeekWire from May 2020 about Amazon’s eight-floor family homeless shelter attached to its Seattle headquarters, saying the initiative worked out great and makes it easy for employees who wish to volunteer.

Bezos also suggested converting at least a portion of Twitter’s headquarters, if not all of it, into a homeless shelter. Musk agreed in another tweet, calling it a “Great idea.”

San Francisco, one of the world’s most expensive cities to live in, has seen a surge in the number of homeless people on the streets.

He posted the poll just a day before Twitter CEO Parag Agrawal revealed that Musk will not be joining the company’s board of directors as planned.

Musk’s appointment to the board was to become official on Saturday pending a background check and formal acceptance, “but Elon shared that same morning that he will no longer be joining the board,” Agrawal wrote in a brief message to the company that he tweeted on Sunday.

“The Board and I had many discussions about Elon joining the board, and with Elon directly. We were excited to collaborate and clear about the risks. We also believed that having Elon as a fiduciary of the company where he, like all board members, has to act in the best interests of the company and all our shareholders, was the best path forward,” he said.

“I believe this is for the best,” Agrawal wrote. “We have and will always value input from our shareholders whether they are on our Board or not. Elon is our biggest shareholder and we will remain open to his input.”

Musk has not addressed his decision but cheekily tweeted a giggling emoji with a hand covering its mouth early Monday morning.

The Tesla and SpaceX CEO was invited to join the board one day after disclosing a 9.2 percent stake in Twitter last Monday, becoming its largest shareholder.

Just days earlier, he publicly trashed the company, which he called “the de facto public town square,” for “failing to adhere to free speech principles fundamentally undermines democracy” and mulled launching his own social media platform.

“Free speech is essential to a functioning democracy. Do you believe Twitter rigorously adheres to this principle?” Musk asked users in a Twitter poll on March 28, in which over 70 percent of the 2 million voters responded “yes.”

The massive purchase may have violated federal law, according to financial experts. After the billionaire filed his disclosure forms, Twitter’s share price skyrocketed 30 percent.

Musk had suggested a raft of changes to the Twitter Blue premium subscription service on Saturday, including reducing its price, banning advertising and giving an option to pay in the cryptocurrency dogecoin.