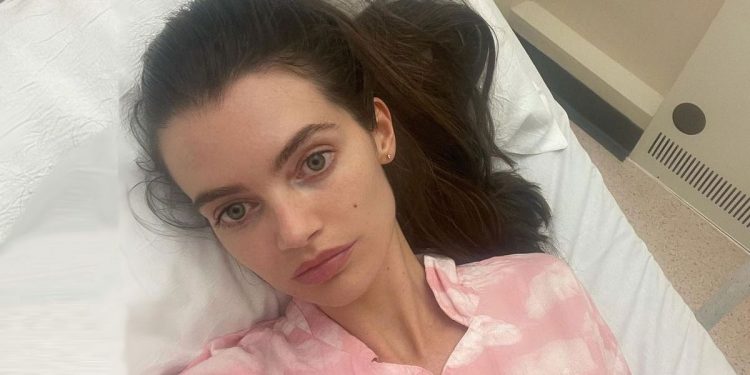 
The mum-of-two – who is married to former Geordie Shore star Gaz Beadle – discovered she has holes in her heart weeks before her wedding last year, and was later diagnosed with a condition that causes ulcers and bleeding in her colon

Emma McVey has opened up about the terrifying health conditions that she suffers that leave her fainting, thin, and losing blood.

The 29-year-old model married Geordie Shore star Gaz Beadle, 34, last year – and together they have a four-year-old son named Chester and a two-year-old daughter named Primrose.

Colitis is a condition which causes the colon to become inflamed – with Emma being left sapped of energy and barely able to stand before she was successfully diagnosed.

Emma McVey has opened up about the health issues that leave her weak, thin and bleeding
(

Speaking about her frightening health conditions, Emma told Fabulous magazine: “The past year has been a whirlwind. I’m still trying to get my head around this latest health issue. Two weeks ago, I had another flare-up — I lose a lot of blood and feel really tired — so I’ve recently had my medication doubled and steroids reintroduced.

“I did lose a lot of confidence. One health issue after another gets you down and I was so thin, my face looked gaunt, which made me feel insecure.”

The influencer says she wants to raise awareness of colitis as it is a condition that some sufferers feel self-conscious about.

She explained: “Colitis is an awkward topic. Some people end up having surgery and stoma bags fitted to drain waste. I get messages from people saying they’ve done it and never looked back, so I’ll judge where I am in a couple of years.

“It’s common for sufferers to end up depressed, because living with a long-term condition like colitis can take a considerable toll on your mental wellbeing, and the stigma means people often don’t feel comfortable speaking out. I don’t want to hide and pretend this isn’t happening.”

The NHS describes the condition as: “Ulcerative colitis is a long-term condition where the colon and rectum become inflamed. The colon is the large intestine (bowel) and the rectum is the end of the bowel where stools are stored. Small ulcers can develop on the colon’s lining, and can bleed and produce pus.”

While the NHS also adds that the condition is treatable.

Later in her Fabulous interview, Emma opens up about the surgery she requires to fix three holes that were discovered in her heart.

She had complained to doctors about experiencing seizures and fainting – prompting medics to believe she suffered from epilepsy.

However, once she became pregnant with her daughter, these symptoms became worse and she started to pass out even more often.

Doctors attached a heart monitor to her and it was discovered that there were holes in her heart – and the medical experts were shocked she had survived undergoing a c-section when her daughter arrived.

Emma is expected to go under the knife to have the condition treated but will need to put off having more children until after the procedure.

She has been forced to delay the surgery, however, as the steroids she is taking to treat her colitis could affect the way her bones can heal.

She also praised Gaz for his support during her diagnosis and health battles.

Tackling housing speculation needs to be in our housing solutions

Tested positive? See if you qualify for Paxlovid, and how to get it – Boston.com

You dont have to do cardio for weight loss, resistance training as effective – Insider