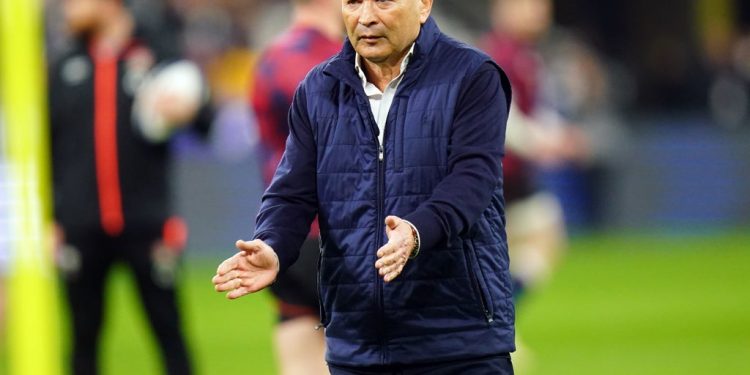 Eddie Jones has urged England fans to keep believing in his ability to lead the team to a successful World Cup next year, despite presiding over another failed Guinness Six Nations campaign.

England slumped to their third defeat of the tournament, with France crowned Grand Slam champions and claiming a first title since 2010 in Paris on Saturday evening.

For the third in five years, Jones’ side have ended the competition with just two wins and once more he is fighting for his future as head coach 12 months after he survived an inquest into finishing fifth.

Jones has called for supporters to show patience as he continues his pivot towards younger players such as Marcus Smith, Freddie Steward and Harry Randall, promising it will come good at France 2023.

“They’ve got to have some faith. I think I’ve done a reasonable job for England for the past seven years,” Jones said after the 25-13 loss.

“I’ve coached for long enough to know this is all about rebuilding a team. Rebuilding a team at international level is a complex and intriguing project, particularly when you’re coaching a team like England where the expectation is so high.

“You don’t get any latitude when you’re bringing young players through who tend to be more inconsistent as they learn their craft at international level.

“Look at the French team, it took them three years to win the Championship. We’ve rebuilt the side from the last Six Nations. I think the progress is very positive and I couldn’t be more excited about the prospects for this team.

“The results aren’t the results we’d like – we’d all like to be winning tournaments and be at the top of the table, but we’re not quite good enough to do that now. But within the next 12 to 14 months when we prepare for the World Cup, we will be.

“We’ve got 12 Tests before the World Cup and if you look at that, it means guys like Freddie and Marcus and Harry are going to increase their Test experience by 100 per cent in that period.

“There is a great learning experience for them. I think the timing for our team going into the World Cup is very good.”